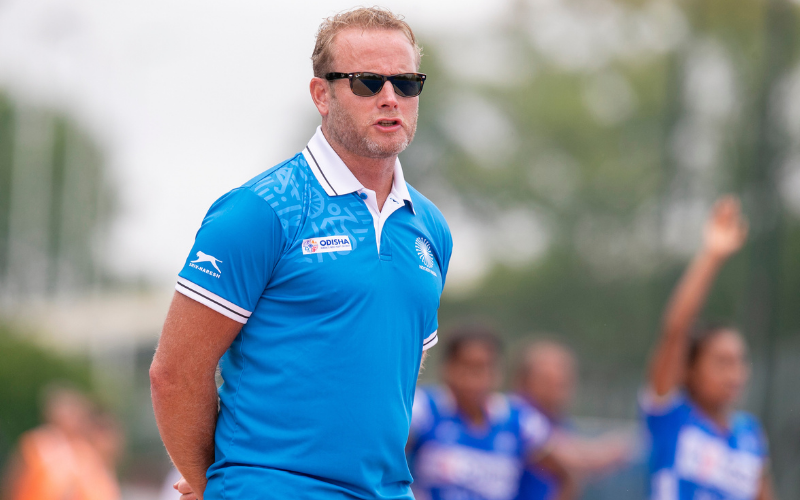 A team of 18 players and 7 support staff will leave from Bengaluru on 23 February 2021 for 4 matches against the German National Team.

After their tour of Argentina where the Indian Women's Hockey Team played a total of 7 matches, the Rani-led squad is all set to travel to Dusseldorf, Germany to play four matches against their National squad as part of their preparations for the Tokyo Olympic Games. The team consisting of 18 players and 07 support staff will leave on 23 February 2021 from Bengaluru where they are currently housed in SAI, Centre for National Coaching camp.

The first match against the World No.3 German team is scheduled for 27th February followed by the second match on 28th February. After a day's break, the team will play again on 2nd March followed by the last match on 4th March 2021. "We feel privileged to travel in a short span to play yet another top team in the world. Germany will be one of the favourites at the Tokyo Olympics and to test our level against them will really help in our preparations. Hockey India and SAI worked swiftly to ensure this tour was sanctioned and I thank them for making this happen," stated Indian Women's team Chief Coach Sjoerd Marijne.

Following their experience against the Argentinian side, the Indian Women's Team had returned to SAI, after a brief break, for the National Coaching Camp where they planned to focus on the areas that needed improvement basis their performance analysis. Marijne believes playing against a team like Germany who play with a different style will only challenge the team further to improvise. "We have to make the most of every opportunity we get to play against these higher ranked teams. Germany plays with a very unique and different style compared to Argentina and this will help us prepare for the Olympic Games. Also, since these are back-to-back matches, our level of fitness will also be tested," Marijne opined.

Indian Women's Team Goalkeeper, Savita added "Back to back tours, playing the top ranked teams will be beneficial in our preparations towards the Tokyo Olympics 2021. This will be another opportunity for our team to try out various players in different formations. We look forward to playing these matches against a top team like Germany and I believe this will not just be an enriching experience for the team in terms of experience but this will also test our fitness levels as we are coming from a long tour of Argentina."

Hockey India and the host National Association have planned to create a bio bubble in Dusseldorf to ensure the safety of players and support staff.

Much like their trip to Argentina where the team followed strict bio-bubble, the Indian Women's Team will be staying in a hotel in Dusseldorf where a provision to have separate rooms/halls for the team for all the meals, team meetings, sessions etc have been made. The accommodation will be on twin sharing basis, where the room sharing partners will remain same throughout the tour who will also be same even in case of the seating arrangement in the team coach/bus, this has been planned carefully keeping in mind all necessary requirements.

"The facilities in Argentina were fantastic. In these circumstances, we can't be too demanding either. The priority will be safety of players and we will be following all rules in Germany and SOPs provided by Hockey India," Marijne added.

The team members will not be moving out of the bubble and meeting any third-party source as even while travelling to the match/training venue the team will be travelling in a dedicated transport. The local resources along with the team eg. Team bus/coach, drivers, support staff will all remain the same throughout the tour to avoid any lapses in any way possible.  There will be no movement for members to move out of the hotel except for training and match days.

The entire Indian contingent has undergone a Covid-19 RT-PCR Test 48 hours prior to their entry in Germany. The team will be following all safety and health measures as advised by the respective Governments of India and Germany. Further the teams will also be following the Hockey India SOPs as available on the Hockey India website.