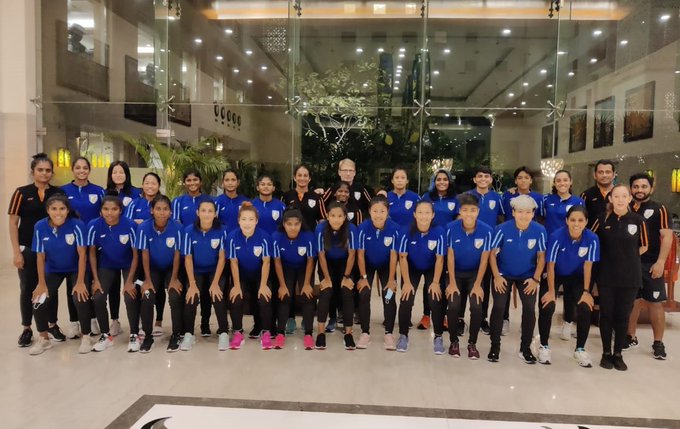 The Indian Women's Team safely reached Dubai, UAE on Thursday, September 30, 2021 for their upcoming friendlies in the UAE and Bahrain, which get underway on October 2.

These friendlies have been planned as part of the team's preparation for the AFC Women's Asian Cup, which is set to take place in India next year. The Indian Women's Team has been camping in Jamshedpur with help from the Government of Jharkhand.

The 23-member squad along with the support staff travelled from Jamshedpur to New Delhi, before boarding a flight to Dubai.

The Indian Women's Team will play two friendlies against the United Arab Emirates (October 2) and Tunisia (October 4), before travelling to Bahrain, where they are set to face Bahrain (October 10) and Chinese Taipei (October 13).

"The girls are all excited to be getting some match time for our Asian Cup preparation. We have trained hard for the last month in Jamshedpur, and now we are ready to test ourselves against some tough opponents," said Head Coach Thomas Dennerby.

Captain and centre-back Ashalata Devi thanked the authorities for arranging a camp and international matches during such difficult times as that of a pandemic.

"We know the situation is not easy right now, but way everything has been arranged to help us set up a long term preparation for the Asian Cup is amazing," said Ashalata Devi.

"Right from the camp being organised by the Jharkhand Government with top facilities, to matches scheduled against tough opponents, we have received immense support. All the girls are extremely thankful for that, and we are all putting in our full effort to be ready for the Asian Cup," she further stated.

23-member Squad are as follows: