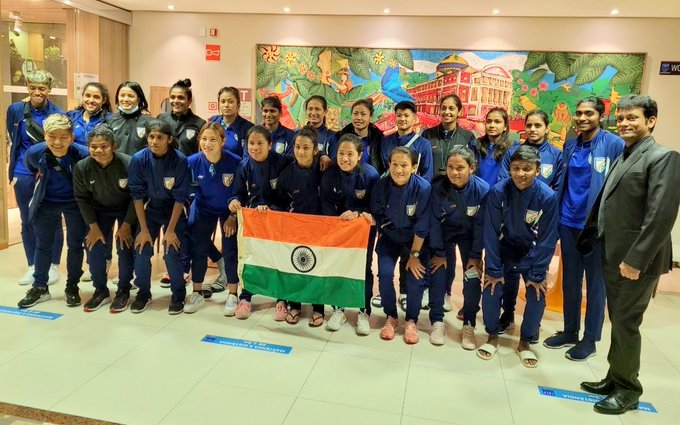 Inspired and excited, Women’s Team stare in the face of Indian Football history as they land in Brazil

The Indian Women’s Team landed in what can literally be called the heart of the Amazon Jungle – to be more specific, at the Eduardo Gomes International Airport in Manaus, the capital city of the state of Amazonas in Brazil.

Nestled away on the side of a confluence of two rivers – the Rio Negro and the Amazon River – halfway across the globe, Manaus is all set to bear witness to a historic moment in Indian Football. This is the first time that any senior Indian team will be playing against Brazil (on November 24).

The mood in the Indian Women’s Team is one of excitement. It has been a rather long journey from the other side of the planet, but the energy and excitement in the team drown out any hint of jetlag. The players were greeted by the Indian Embassy upon arrival at the Eduardo Gomes International Airport on Monday, November 22, 2021.

The energy, of course, is also down to the strict routine laid down by the team management for the players, who have used the long flight to catch up on all the rest they could, so that they can hit the ground running in Brazil.

“We are very excited,” beamed India custodian Aditi Chauhan. “We’ve never dreamt about playing against a team like Brazil, but we are here. It’s simply amazing.”

The Indian Women’s Team had been camping in Jamshedpur, with infrastructural and logistical aid from the government of Jharkhand for the past few months. In the midst of the camp, the team also took off for six friendly games against UAE, Tunisia, Bahrain, Chinese Taipei, Djurgarden IF and Hammarby IF, across three different countries, as they prepare for the AFC Asian Cup. In fact, this is the 6th country which the Indian women have been to in 2021 for exposure tours.

However, as they get ready for this next tour where they will face off against Brazil (November 24), Chile (November 28), and Venezuela (December 1), the players remain thankful for the opportunity to play in some of the matches that they might go on to remember for the rest of their lives.

“It’s really exciting that our coaching staff and federation believe that we can play against tough teams like Brazil, Chile, and Venezuela. I’m sure this will be one of the matches that we will remember all our lives. There’s no fear, we will not hold back and be overborne by the occasion,” said Aditi.

While many are excited at playing against one of the top-ranked nations in the world, there are some who will be fulfilling their childhood dreams, and unsurprisingly, it is two of the forwards in the squad who have been supporters of the Canarinhas – Anju Tamang and Manisha Kalyan.

“I couldn’t believe it when the Brazil tour was announced. I had to go and confirm with our team management, and even then I could not believe it,” laughed Anju. “I was really happy and excited, so I wanted a proper confirmation. I still can’t believe that I will be playing against someone like Marta. I can’t describe these feelings.”

Playing against Brazil serves up the opportunity of squaring up against some big stars like Marta and Formiga, who have been absolute role models for footballers all across the planet. Anju Tamang is someone who has grown up idolising the likes of Marta while watching the Brazilian star on television.

“I’ve been a big fan of the Brazil side ever since I was a kid. Growing up in my village, everyone would support Brazil. I also used to join in and support them. And for as long as I can remember, Marta has been playing for Brazil and been doing such a brilliant job on the pitch. Her hunger and passion for the game are things that inspired me a lot in those early years. She still continues to inspire me,” stated Anju.

Manisha, who has made herself a regular in the team ever since joining as a fresh recruit from the U-19 squad three years back, has also been a big fan of Brazil ever since her childhood days, when she would watch the Brazilian teams with her friends back in her village of Rurka Kalan in Punjab.

“When we used to watch the FIFA World Cup, I used to follow some of the players like Neymar and Ronaldinho. I have also been a big fan of Marta over the years. I have seen her play in the World Cups and the Olympics, and she is just an inspiration for everyone. I’ve been watching them and learning football, so I feel all the more excited at being in Brazil,” said Manisha. It’s a country that lives, breathes, and eats football, so as a footballer, it is a dream come true to be able to play here.”