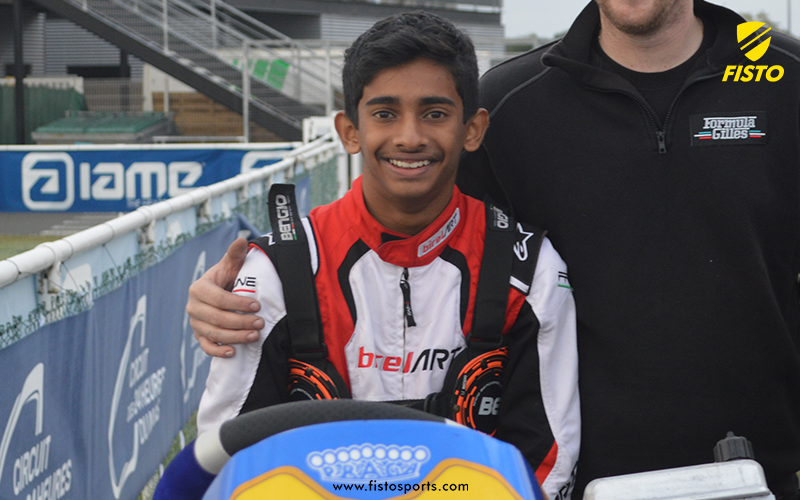 The 14-year-old is currently part of a new generation that is taking the Silicon Valley state’s motorsport scene by storm.

Karnataka is synonymous with producing exemplary talent throughout the decades of motorsport. The conveyor belt of producing prospects has not slowed down to this day. Among the latest young talent to emerge from the State is 14-year-old karter Ruhaan Alva.

Karting is no kid’s game. Expensive and ultra-competitive, karting is viewed as a stepping-stone for professional racers and Formula One circuits.

Ruhaan found his passion for  at the very young age that prompted him to pursue motorsport as a sport. He first drove a kart at a local track in Bangalore in 2013 and since then he has not looked back.

In a career with so many highlights, Ruhaan is most proud of his 5th place finish at an international race in Italy.

The 14-year-old lists his heroes are Lewis Hamilton and the late Ayrton Senna. Being on the race track doesn't mean Ruhaan has ignored his studies. He is good at academics too, securing 90% plus.

Karting’s competitive nature is what makes the sport so appealing to Ruhaan. Currently racing for MSport team, the young talented racer has found the perfect environment to blossom. Today, he feels ready to take up new challenges.

While Ruhaan still has a lot of development ahead of him, the NIOS (home-schooling) student is on his way to being an impressive, young, motorsport talent.

How did you get involved in racing? What are your first memories about the time when you knew this would be something you pursued?

The first time I drove a go-kart was at a local track in Bangalore. My dad took me there and initially it was a hobby for me. After that when I turned 7, my dad took me to the UK where I was trained and that’s when I knew I wanted to pursue racing as a career.

Who were your first motorsport heroes? What was significant about their achievements or character that you admired?

Ayrton Senna is my racing idol because of the style of driving that he had. He was always at the top no matter which car he was in and in conditions that other drivers struggled he dominated the races.

You raced in karts at the age of 8. You’re still very young. What’s the support of your family in your karting racing career and how important have they been in your rise through the motorsport ranks?

If it wasn’t for my father, I wouldn’t have got into motorsports in the first place. He introduced me to it and has supported me the entire time by taking me to races all over the world. My mom as well supported me a lot. Every time I came back home after a race weekend, she would sit down with me and help me catch up on the studies and notes I had missed.

Tell us about the first time you saw Formula 1 and what it felt like to get in your own kart.

My first memory of formula 1 is Max Verstappen winning his first race. The first time I got in a kart, I was pretty scared initially. But once I started driving, I loved it and didn’t want to stop.

What was your first win in any form of racing?

My first win was in 2015 in Hyderabad. It was an amazing feeling winning my first race and I will never forget it.

How did you felt when you become the first Indian to win the Italian Vice-Champion?

It was a good feeling to be the vice-champion in Italy. But I was disappointed at the same time because I knew I had a good chance to win the championship and because I had lost the championship due to a disqualification in one of the previous rounds for no fault of mine. Plus, I had missed the first round because I was in a different category.

How do you balance study and play? What goes on in a day in the life of you?

My mom helps me with the studies. Whenever I am lagging behind, she makes sure I catch up. Every morning at 7, I need to be in the gym because racing is a very physically demanding sport.

For the rest of the day, I generally have tuitions and need to catch up on my studies since I am appearing for my 10th Standard board exams in May 2021, a year earlier than normal so I can focus on my career in Europe post-June 2021. I take a break in the middle to play basketball or cricket with my friends in the evening for an hour.

If you could team up with a driver from past or present, who would you want to be your teammate?

Ayrton Senna because I believe he is the best F1 driver of all time and there is a lot I could learn from him.

Who is somebody famous who you'd like to meet that you have not met yet?

Lewis Hamilton. He is one of Formula 1’s great drivers.

I would probably choose Stephan Curry because I love basketball.

What do you enjoy most about racing?

I love the speed as well as the racing where you are continuously changing positions and fighting for the win.

What is your favourite racing circuit in the world?

Spa would be my favourite circuit in the world. Even though I have not driven it in real life it is an amazing track to drive on the simulator.

Where does your motivation to win come from? Why do you want to win so badly?

I am a very competitive person and want to win at everything. In racing, I am motivated by my dream to be a multiple-time Formula 1 world champion someday.

What are your most memorable moments from your races? Any ones that stand out that you remember like they were yesterday?

I remember one of my races in Italy like it was yesterday. I had started the race in 18th and in 12 laps fought all the way back to finish 5th.

What are your future career goals?

My ultimate goal in racing is to be a multiple-time world champion in Formula 1.

A movie that you watched more than 10 times:

Jumanji - Welcome to the jungle

If you could race with anyone/celebrity who would it be?

3 things you can’t live without

Racing, music and my dog, Trixie

Shravanthika Lakshmi: ‘I want to officiate in one of the F1 events after I finish racing because I am more interested in the officiating sector’