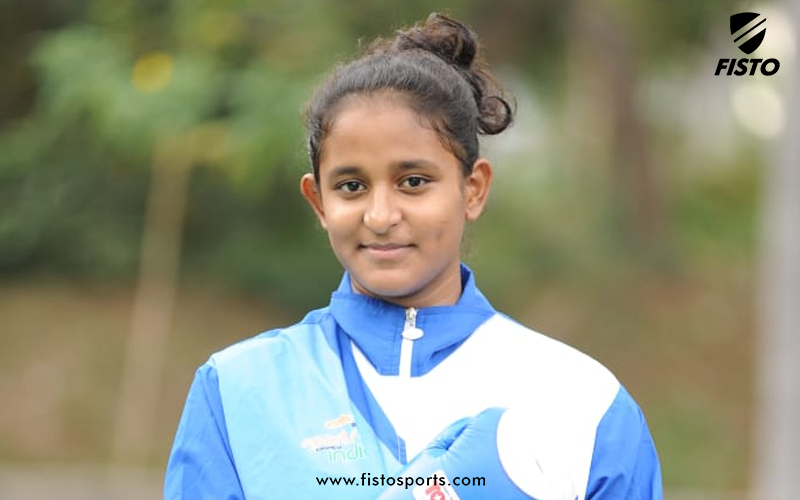 The latest to join the steadily-increasing numbers of Indian boxing new wave of talent is Niharika Gonella. The Telangana based boxer is only 19 and continues the recent trend of a much younger breed of boxers coming through to the ranks.

Every person has a different story to tell on how they first came to cross normal everyday life to become that rare breed, a fighter.

Some may label Niharika Gonella a nine-day-wonder, but the foundations were laid very early in her teenage years. Even at the tender age of 5, Niharika knew a career in sport was already beckoning.

For Niharika, boxing was perhaps inevitable. Her elder sister Naganika Gonella was a professional boxer, and the inspiration for Kokila to follow in her footsteps was not in the cards. Having played volleyball, handball and gymnastics in her early teens, Niharika has become naturally athletic and when she was 13, she was contacted by her sister trainer who reached out to her completely out of the blue to ask if she wanted to turn boxer. In a gym at 13, her first national gold two weeks after started training, and her life in the squared circle had begun.

It is immediately clear that Nihrika is fiercely determined. Which is why it comes as no surprise that the change in sport became a success. Having a sister who boxed certainly helped her little sister gravitate to the sport herself.

Within years she was established as a prodigy and was soon winning state and national level championships.

Here is a glimpse of what she has achieved in her career so far:

Despite her impressive CV, Niharika found it wasn’t always smooth sailing as her injury creeped in to try and get the better of her.

In the current times of uncertainty, Niharika has remained eager to get back into the ring to show everyone what she is about.

Niharika said she's always looked up to Nikhat Zareen as a role model.

Nikhat Zareen’s indisputable support from both a sporting and personal perspective has helped Niharika grow into the boxer she is today.

The Villa Marie Degree College student dreams big and like most boxers wants to see herself on the Olympic podium in the near future. For now, though, she is focusing on making a comeback with a gold medal in the next Senior National championship. She had lost many opportunities due to injury and she doesn’t want to miss anything now and it will be exciting to see where her raw talent will take her on this boxing journey over the next few years.

We wanted to start out with how you originally got into boxing. What brought you to picking up the gloves for the first time?

I was in to sports from the age of 5. I started my sporting career as a Gymnast but as I was not very flexible, I had to change my game. I played handball my father’s game for some time but was not very keen to continue then I shifted my whole focus to volleyball. I loved playing Volleyball. I still remember my first Mini National where I was selected as a substitute for the extra six and how I hated sitting and watching the game from the bench after coming back home I worked very hard till the next nationals that I became the captain the next year. I played 3-4 nationals in volleyball I was the team captain 3 times.

Then, one day, as usual, I went to training to the stadium where my sister’s (elder sister is also a boxer) boxing coach saw me insisted that I start boxing instead of playing volleyball. He told me that I was wasting my time and my talent playing a team sport. He told me that I would be a very good boxer and make my country proud.

At first, I was not very interested to shift my sport again and especially I was so into volleyball that I could never think of shifting to any other game but the coach too was very adamant he was always calling my parents telling them to send me to the state camp which was held for Panchayat Yuva Krida Khel Association (PYKKA) nationals that let her give it a try If she still doesn’t want to then she can continue to do what she likes. My parents then told me that maybe I should give it a try, and then I went to the camp and enjoyed learning a new sport and participated in the PYKKA Nationals and won a gold medal then I thought I have given so much time to volleyball but I never won a medal at any Nationals just two weeks into boxing and won a Gold medal at the National level and boxing was interesting so I completely shifted my focus and goals to boxing now I am boxing with just one thing in my mind that I will win a Gold medal for my country at the Olympics.

What’s the toughest aspect of being a boxer and what do you enjoy the most about it?

Who were your first boxing heroes? What is it about them that attracted you to their style? What was significant about their achievements or character that you admired?

Claressa Shields is one of the women boxer’s I admire the most. She is fearless. Her confidence, her style and the way she performs in the ring. She is unbeatable both mentally and physically. The significant thing about her achievements that made me admire her the most is that she won an Olympic gold medal at the age of 17.

We all know that you are successful in your sport. But the first win and the first medal is always special. Do you remember your 1st success as a boxer? If yes, how will you describe that moment?

Yes, of course! I remember my first win as a boxer. It was the moment when I realised that I was meant to be a boxer. I was so happy seeing the gold medal in my hand for the first time at a National level. I didn’t have to depend on anyone else’s performance to win. I didn’t have to worry about how other teammates are playing. All I had to do was give my 100 per cent all by myself all I had to think was about myself how was I going to box how was I going to perform.

As a young boxer, who were some of the people that you looked up to for guidance? Who were the people you would speak with to get better at boxing?

I always looked up to Nikhat Zareen for any guidance I needed. She is my senior and she has always helped me get better. Whenever I needed guidance, I always spoke to her. Whenever I had a bout or have a bout, I always take her advice.

What impact has coach Ronald Simms.had on your life on and off the ring?

It was a life changing opportunity for me in the year 2017 when I got selected to train at Inspire Institute of Sports under coach Ronald Simms. He is a wonderful coach with a lot of knowledge he has helped be become a better boxer. I always thought that boxing was all about hitting the opponent no one ever told me that defense is equally important in the sport of boxing coach Ron has taught us that boxing is not just about attacking the opponent and getting hit. it is all about hitting and not getting hit he taught us that defense plays a major role in the sport of boxing.

My boxing style has changed a lot from the day I have started training near him. I have become a better boxer and a better Human too. coach Ron has not only  taught us about boxing but even a lot about life how to be a better human. He has helped me a lot in improving my self as a boxer and even as an individual person. He's the best coach. I will always be grateful to him.

How would you describe your boxing style, and which boxer would you compare it to?

This is kind of tough question. I am not the aggressive type of boxer. To be frank, I am a bit slow, I need to improve on my speed. I love to move a lot; my straight punches are very good. I would say I am a counter boxer. I am unique and every boxer's style is unique to themselves. we can’t compare any boxer’s style with others as each boxer has their own style of boxing.

If you get involved in a brawl and could choose any fighter to be on your side, who would it be?

I would choose Claressa Shields.

What was the first fight you watched on TV and who are your top 3 favourite fighters of all?

The first fight I watched on TV was of Floyd Mayweather and Manny Pacquiao. My top 3 favourite fighters of all are:

How did you feel the first time you stepped into the ring?

The snack you miss the most when you are in training camp?

Are you scared of opponents heavier than you?

Two of today’s best fighters are Floyd Mayweather Jr. and Manny Pacquiao (though both retired) – who’s style you prefer. And would you consider them good role models for young boxers to emulate in terms of their boxing styles?

I love both the boxer’s style. Both have their unique qualities. I would prefer to take little from both as both are great boxers. Yes, definitely both are great role models for young boxers.

What is your favourite boxing workout routine?

How does participation in boxing or sports generally benefit other areas of life?

Sport teaches you a lot, not only about the sport you play but you learn a lot about life too. You learn to sacrifice; sport teaches you patience, it teaches you the value of time, the importance of discipline in life and a lot more. Overall, it makes you a better person.

Do you have a five-year plan in boxing, or a list of specific goals you want to accomplish before hanging up the gloves?

Yes, I definitely have a plan. For now, I want to make a comeback with a gold medal in the next Senior National Championship. I had lost many opportunities due to my injury but I don’t want to miss anything now. After winning the Senior Nationals 2021, I want to win gold at the 2022 Commonwealth Games and then the World Championships and then gold at the 2024 Olympics and so on. I am working on myself. I have many areas that I have to work on to be a better boxer. I will keep working until I reach my goals.

Through her hard work, dedication and risks taken Niharika Gonella has got this far, join the journey and watch the future unfold of a potential boxing world star!