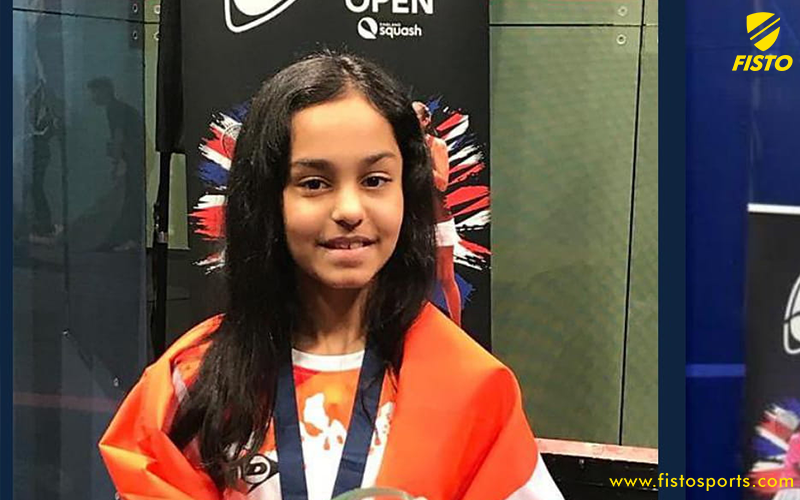 There are not many 13-year-olds that can boast of having ranked No.1 Squash player across Europe, Asia and India and 40 national circuit titles, 2 times National Champion, 6 International titles under their belt. Anahat Singh can.

Of all the enticing young prospects currently coming out of India, Anahat Singh is arguably one of the most exciting. The 13-year-old talent has received plenty of plaudits after a series of impressive performances over the years, and it is no wonder why.

The teen prodigy has exhibited her class not only in India but also throughout Asia and Europe, and well truly has blossomed into one of the most promising squash players in the country.

Anahat initially started playing Badminton at the age of 6 and became one of the top players winning many Delhi/NCR tournaments. She started playing squash when she was 8 and very soon became India No.1 in the girls U-11 category and maintained her ranking for 2 years before changing her category. Anahat was also Asia no.1 in girls U-11 for 8 months before moving to girls U-13. She is currently seeded No.1 in India, Asia & Europe in the U-13 category. She is also seeded No. 4 in U-15 category.

The accolades that Anahat has won are truly stupendous. In the past three years, the student of the British School, Chanakyapuri, has scooped two European superseries titles, gold each at the European Junior Squash Open and DPD Dutch Junior Open in 2019. In December 2019, she won the Scottish Junior Open and reached the finals to clinch the silver at the British Junior Open. Anahat has so far won 40 national circuit titles including being a two-time national champion. She has a bronze at the Asian Juniors and a silver in Malaysian Junior Open 2018 marking a golden chapter in the history of Indian squash, as she has become the No.1 ranked player across Europe, Asia and India in the girls’ under-13 category.

With parents and coaches as strong as hers, Anahat will have every belief she can make it to the very top. With her sights set on to become a World Champion in PSA, she can become a top-quality player in the near future if she keeps improving at this rate and could be a stalwart for the Indian Squash for years to come.

You are very young, and have quite a few titles under your belt, and I am sure it must have been a quite rollercoaster journey so far in your Squash career, so tell us about how did you first get into the sport? What are your first memories about the time when you knew this would be something you pursued?

Competing at such a young age, how did you juggle studies with sport? How supportive your school in your sport?

As of now, there isn’t so much of pressure in studies. My school is very supportive and gives me leave whenever I need to travel for tournaments. My teachers also help me catch up with my studies.

My parents just tell me to have fun and play my best.

According to me, my shot selection. Also, I like taking risks which sometime works in my favour.

And how do you control nerves during a long rally?

I just focus on playing good shots and not making an error.

I like to attack and normally play aggressive unless it is a close game.

What are your plans and goals for your life in Squash? How do you see your future in the sport? Do you plan to stay involved in Squash for many years?

My dream is to be a World Champion in PSA and hopefully get a medal in Olympics when squash is given entry.

Mistake made most often during tournaments?