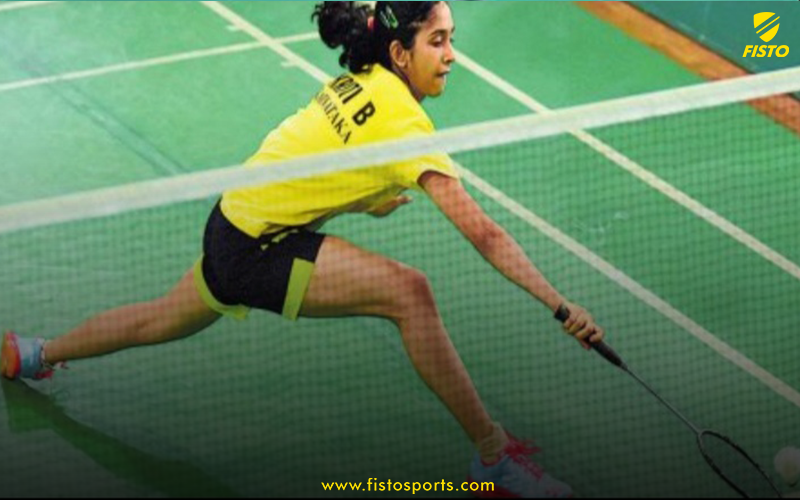 The latest young prospect from the Bengaluru’s Selenite Sports Academy, intelligent shuttler Kriti Bharadwaj looks to have all the hallmarks of a star in the making.

In the unpredictable and turbulent world of Indian badminton, one thing you can always rely on is the steady flow of youngsters making a name for themselves.

You don’t have to look that much further to see there is a depth of talent emerging from the relatively modest environs of the country. Tasnim Mir has established herself as a proven talent and Tanisha Crasto has enjoyed a promising start, while Anupama Upadhyaya, Mansi Singh and Samiya Imad Farooqui have developed nicely too. After some promising displays in the Nationals over the last couple of years, 17-year-old Kriti Bharadwaj now seems on the cusp of becoming one of the hottest talents in India.

Kriti has made her presence felt in India in the recent years and have done so playing badminton which is easy on the eye.

She may only have 50-60 tournaments under her belt and could do with adding more end-product to her game but her impressive repertoire talks for itself. Here’s some:

Armed with a fearless and bold attitude, the Jain College, Bengaluru shuttler’s directness, burst of acceleration and devilish jump smash ability make her a real handful of shuttlers to keep an eye on.

At what age did you start in Badminton?

I started playing when I was 8 years old, after trying other games such as Table Tennis and Cricket. As I enjoyed playing badminton more, I decided to continue. I started by playing 3 times a week in a club near my house.

When did you say: yes, I will dedicate myself to badminton?

I won an under-15 national ranking tournament in Gulbarga when I was 13 years old. This was an unexpected win as I received a wildcard into the main draw as it was held in my state. This tournament gave me confidence and led me to believe that I could compete at a higher level. I look back at this tournament to be a turning point in my decision to invest more time in badminton.

To how many countries has Badminton taken you?

I have played tournaments in Indonesia and Myanmar. We had made plans to play international tournaments in Croatia, Israel and Paris this year, but COVID-19 washed away our plans, sadly.

My parents are extremely supportive. From helping me follow a healthy diet, to driving me for practice every day and travelling for tournaments, my parents are with me every step of the way. Coming to supporting me before a match, they tell me to give my 100%, they also help me decide strategy. My parents are accomplished sportspersons and I learn from their experiences on how to prepare for matches, how I should focus on execution and not the outcome of a match. They always tell me to enjoy the process.

How do you get inspired to keep going?

I love what I’m doing, I wouldn’t have it any other way.

Who’s your coach? Where do you train currently?

I train under Mr. U Vinod Kumar and his team at Selenite Sports Academy.

Which badminton player do you admire?

My favourite badminton player is Carolina Marin. Her speed on the court is lightning fast.

Yes, sometimes the training can get repetitive and monotonous. At which times I try to focus on completing the task given to me.

So, what has been your biggest challenge or set back while playing badminton?

I don’t recall any setbacks worth mentioning, but this unexpected lockdown on badminton activities owing to COVID-19 has been a challenge.

I try but I’m human, haha. I follow a diet chart but I do succumb to temptations at times. I love junk food and I sometimes wonder how I would look if I wasn’t playing badminton.

I haven’t thought of alternate careers. I enjoy studying, so I assume I would be a regular student studying science.

My favourite show is Brooklyn Nine-Nine. I don’t have a reason for why I like it. I also read a lot. My favourite book is Tuesdays with Morrie.

Non-badminton athletes that you admire the most and why?

I admire Roger Federer. I love how he makes the game look so easy. I like how calm he is on the court.

Which are your short and medium-term objectives as a Badminton player?

As of now, I want to become as fit as possible before tournaments resume. A medium-term objective for me would be transitioning into the senior circuit smoothly as next year is my last year in the junior category.