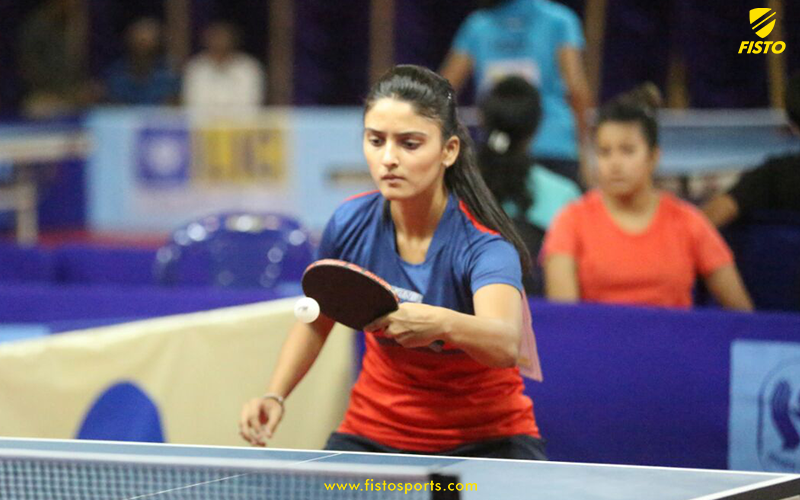 As with many young paddlers, the impressive career of Shruti Amrute has been a whirlwind of progress and she will look to add extra-intelligence to her game to bring laurels for country.

Our childhoods are filled with great memories, especially sports. As time passes, we forget what we played and continue with our careers. However, a few of them retain that spark and decide to build their career around their passion, sports.

One such example of this is Shruti Vijay Amrute, a national level TT champion from Mumbai.

Shruti started playing table tennis at the age of six and initially it was a hobby for her. However, when she started picking up strokes with speed and ease, her family encouraged her to try competitive table tennis.

Later, she began by representing her school at the district level and has quickly established herself as one of the Mumbai’s brightest stars in the sport.

She has won tournaments both domestically and nationally and also gained valuable exposure to the international tournaments.

Her other accomplishments include winning medals at international tournaments. She won the silver medal at Cadet and Junior South Asian Championships in 2014 and bronze medal in Women's singles at South Zone held at Trivandrum 2019 and gold medal in Team event at Senior National Championships held at Hyderabad 2020. She also represented Goa Challengers in Ultimate Table Tennis league in 2019.

Ranked No.7 at the national, Shruti will look to add extra intelligence to her game which will match her physical qualities and new-found mental strength. There is no doubt that the 22-year- old is in the best environment to flourish and her attitude looks to be up there with the best, eager as ever to learn and to win medal for the country at the highest level.

Cricket and football are probably the most popular sport in India. Tell us how you got started with table tennis. How old were you and who introduced you to the sport?

I started Table Tennis as a physical fitness. My parents want me to be in some sport. I started it at the age of 6 or 7.

Who were your first TT heroes? What was significant about their achievements or character that you admired?

My TT hero is Sharath Kamal. He has set a perspective for all Indian Table Tennis players that winning medals at international level is not an impossible task. Also, I love the way he carries himself with full of confidence and down to earth personality.

What equipment do you currently use?

We all know that you are successful in your sport. But the first win and the first medal is always special. Do you remember your 1st success as a paddler? If yes, how will you describe that moment?

My first win was under-10 at district level where my whole family came to watch that finals. It was a tough match. It was a decider 3-2 and 13-11 and I won. While returning home from tournament, my whole family was cheering me and I think that was the memorable match for me.

Having short goals in each session keep me motivated.

Can you share with us what are your biggest influencers during your growth?

Influencers who helped me during my growth are my coaches Kamlesh Mehta sir, Nitin Bhange sir and Anand Nadapurohit sir.

I don't think If it is important to have a favourite shot. But I think each player has a shot on which heshe is more confident than other. Mine is forehand topspin.

Not able to recollect as during my entire journey there were many good rallies.

Table tennis is a very fast game. Do you get time to analyse within a match?

Yes, we get some time after each set to think on what went wrong and then make the changes accordingly in the next game.

At times, when the opponent has taken a sizeable lead, I try to lesser the point differences by playing aggressive, as playing safe and with cautiousness will lead to more mistakes.

Honours and accomplishments that you are most proud of?

I am sure that your table tennis career has taken you far and wide across the world. Do you have any favourite places and/or international tournaments? Why?

I would love to go to Venice. And my favourite tournament is Oman Open which was in March 2020. I performed well in that tournament, I won with 2-higher ranked players. And also, the day I returned from Oman to Mumbai the next day, onwards, they started to quarantine people coming from that country so, I was pretty lucky.

How would you describe your playing style – more attacking or defensive, and which a paddler would you compare it to?

My playing style is more of attacking.

What are your future plans as far as table tennis goes? Do you hope to continue training through your college years and beyond?

I want to bring medals for India. I have continued Table Tennis throughout my college and now I have completed my college.

Spin or speed: Spin with speed

Most ignored, yet important practice drill? Service and receiving practice

What is your favourite food? Pizza and Pani puri