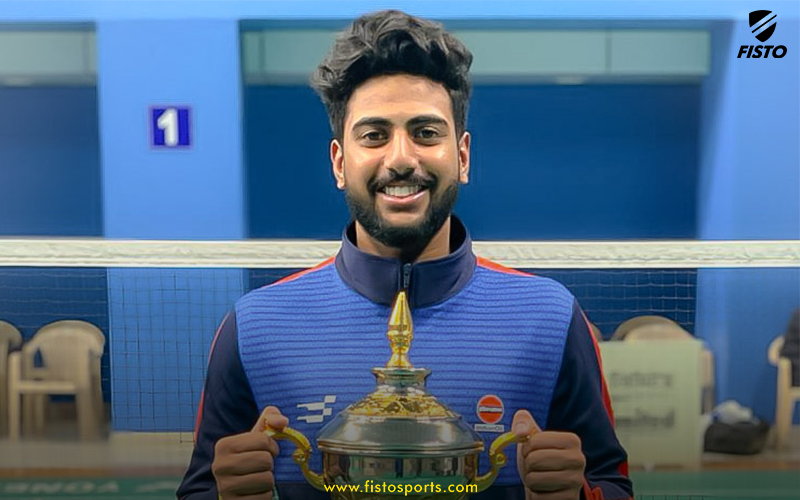 A powerhouse when it comes to Indian Badminton, Pullela Gopichand Academy is home to some of the finest shuttlers in India currently. One such name which has risen through the ranks in the past couple of years is Sri Krishna Sai Kumar Podile.

With a dad who not only admirer of the sport but also played for fitness in his heydays and later, it doesn’t come as a surprise to learn that sport and confidence is not an issue for the younger Sri Krishna.

Hailing from Hyderabad Podile is just 21 years old, but already has a wealth of pro badminton experience. Specialized in the doubles event, the youngster currently ranked 4 in men’s doubles and 8th in mixed doubles, while continuing to build on his strong play.

The Andhra University student has featured for various Indian youth sides such as Asian and world Junior championships and was part of the Hyderabad Hunters squad that emerged victorious in the 2018 season of PBL.

His composure is outstanding and twinned with his searing pace and intelligent play and footwork and smash, put him among the most devastating talents around.

Already a hard-worker in training and unfazed by adversities, thanks to a great commitment and desire to win, if he keeps progressing at the current precipitous rate, there is little doubt he will establish himself as one of the best in the Indian badminton doubles scene and possibly in higher international stages.

What has been your biggest accomplishment in the time that you have been playing badminton?

According to me, everything you achieve and win is big. To choose one particular thing is difficult. But representing India at the international level in the Asian Championships and World Championships stands out amongst all.

Was there any particular reason you took it up?

My father used to play badminton. As a kid I was a sports enthusiast, my father asked me to try badminton and he joined me for the summer coaching camp at the Pullela Gopichand badminton academy.

How has your school/college help you achieve your success in badminton?

I did not get much support from my school, I had attendance issues. After I finished my 10th standard, I shifted to a college which helped me in managing attendance and help me cope up with academics as well.

What do you think of the sports and fitness facilities in your city? Do you think there are any additions you would like to see in future?

The sports and fitness facilities in my city are amazing. With a lot of academies and gyms coming up, I think it is perfect now, it only can get better from this point.

So, what has been your biggest challenge or setback while playing badminton?

My biggest challenge or setback in my career was at the age of 18, where I was not selected in the Indian team for the Dutch and German tournaments. I didn’t know the reason why I wasn’t selected because, as per the ranking I deserved my place in the team. After this happened, I wanted to be in every Indian team, so I worked hard for it and achieved the No.1 rank and maintained it for two years in both mixed doubles and doubles events. I never missed a junior international tournament after that.

And what would be your ultimate sports achievement for badminton?

My ultimate sports achievement for badminton play well at the international stage and win as many titles as possible for India and make the country proud.

Who do you draw your inspiration from?

I draw inspiration from two people in my life. One is Pullela Gopichand sir, who has always been my inspiration and a phenomenal person throughout. And my father Appa Rao Podile, who is also vice-chancellor, University of Hyderabad, has been a pillar of strength in my endeavours forever.

What is your favourite sport other than badminton and why?

My favourite sport other than badminton is cricket. I loved playing cricket since I was a kid. I just love the game and I follow it day in and day out. At first, I started my career with cricket, so I just love the sport.

When was the first time you strung a racquet? Why?

I haven’t strung a racquet on my own, we give it for machine stringing, and obviously because the string breaks very often when we play.

The most embarrassing thing on court would be hitting a shuttle with the frame, I feel so embarrassed when I do that.

And the most embarrassing thing off court was when I and my friend were walking at the Singapore airport and we were so lost in our discussion that we ended up inside the lady’s washroom.

I think sport goes beyond learning physical skills. Badminton helped me to develop better ways to cope with the highs and lows of life. Losing teaches us to bounce back from disappointment, cope with unpleasant experiences and is an important part of becoming resilient.

I never thought of doing a job, I always wanted to play a sport and become a professional sportsman.

What’s your pump-up song? – Remember the name by fort minor

If you could be on the front cover of any magazine, what would it be? – Forbes