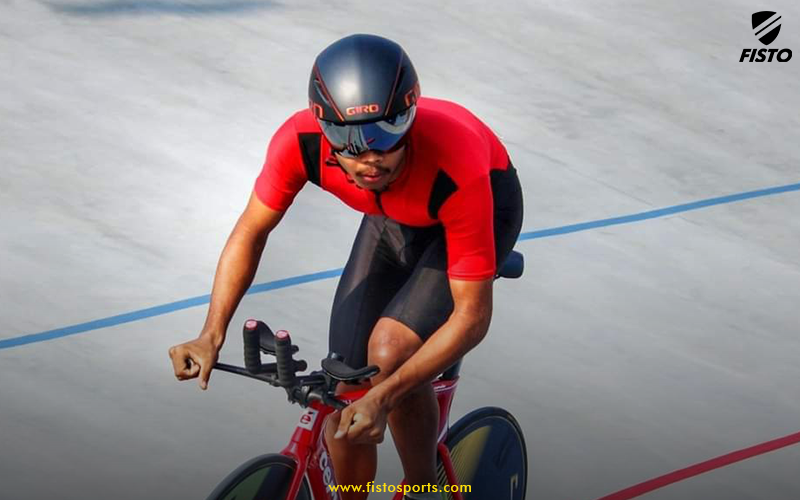 Rimanju Roy, 17, took a giant leap forward in his development in recent years, on both track and road.

Just 17 years of age, Rimanju Roy is one of the brightest cycling prospects in the country. A strong sprinter and classics rider who already shown a lot of promise on both the road and track, he has the versatility to win on a wide range of terrain.

Hailing from Guwahati, Rimanju Roy showed that he could have possibly finished with a better medal in the individual pursuit by clocking a faster time in bronze medal ride-off than either rider in the under-17 final.

If there’s one thing the B. Borooah College student has shown himself to be good at, it’s learning. He has made good progress already in his young career, so much so that he admits to even surprising himself at times.

With a national record in 2KM of 2.27.68 under his belt, it will be fascinating to see how the youngster fares in 2020, especially as he’ll have a much richer race programme.

At what age did you start cycling?

I started cycling at the age of 14.

When did you say: yes, I will dedicate myself to cycling? What fuelled you, any inspiration, person behind the push?

I decided to do it in the year of 2015, I was inspired by a senior of mine named Deepak Kumar. I used to sit and watch him at the club training sessions, wishing I could join in. Finally, when I was fourteen, I started practising daily basis and loved it so much have never stopped.

How would you describe your cycling journey so far?

More than anything, your formative years in any age category is just to learn really. Take plenty of lessons and take that forward into your prime years and hopefully progress onto the top ranking.

Really, it has been a whirlwind journey for me, it just about a big learning curve. It’s more about working hard and grow as a cyclist and team and person as well.

Do you have a favourite cyclist that you like to watch and get inspired by?

Haven’t felt anything as such before as soon as I am with my bike everything around me changes and I am fully focused on my training.

What are two of the most common problems you have on your rides?

What motivates you in your daily training?

There is nothing as such actually but when I am with my bike riding, I forget about everything else and it feels relaxed.

So, what has been your biggest challenge or set back while cycling?

·    Never got a proper support from my state

·    When I played my first nationals, I didn’t have a proper riding gear but still stood in the top-10.

Yes, I am a foodie. But I prepare dishes in such a way that it won’t affect my diet and, yes, we all know the cheat day where we can have whatever we want.

What would you be if not a cyclist?

Would be either a businessman or a boxer.

At this point in your cycling life, what has been the most memorable moment, or moments?

There were many but the most standout moments which made me feel like I was at the top of the world were:

· When I received a letter for the Khelo India camp.

· The moment when I received a letter that I have been selected in the Indian camp.

·  The moment when my coach was standing beside me during Khelo India at the starting line and looking at me.

·  The moment when I broke the national record during Khelo India.

·  Receiving a medal during Khelo India and making my coach provide.

Some say you should never park a bike/cycle outside. True?

Yes, it is absolutely true, it is very unsafe to keep bikes/cycles outside because there are chances of them to get robbed or people fidget with the bikes and can damage important parts.

How much importance should a cyclist attach to dating someone who also a cyclist?

For first, he/she should achieve their goals or targets that they have set and then dating and getting into a relationship can be done at a later stage too.

If you could cycle with anyone/celebrity (dead or alive!) who would it be?

And do you have any particular goals this year?

Ringing in the new year, I am not looking for any big results, more just the experience of racing and the chance to compete in some elite races. There is a few races that I would like to do well in. I would love to do very well and get a medal in the main event of ITT for Road and track Nationals Championship and select for the Asian Track Championships. It is going to be a hard task but that’s one of my goals.