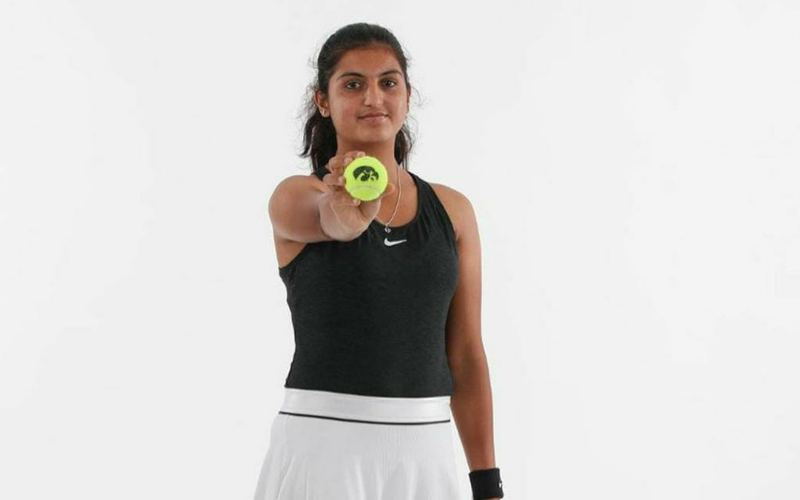 Brave, aggressive, calm and effective in both hands, Vipasha Mehra has been one of India’s tennis bright young talents, the 18-year-old is ready to make her mark with the University of Iowa women’s tennis team this season.

Long-regarded as an excellent tennis prospect after her performances across the Qatar and Indian Tennis Circuit, Vipasha Mehra now has the chance to show what she is capable of for the University of Iowa women’s tennis team this season after joining the Hawkeyes in August 2020.

The Pune-based player who was born in 2002 developed her passion for tennis since she was 8 years old when her father took her to watch an ATP tournament and the very next day, he (her father) enrolled her in classes at the Qatar Tennis Federation and she has never looked back since.

Vipasha has worked her way through the age groups, impressing at every step. With the demanding schedules of the tournaments, Vipasha had to adapt to her formal education by choosing to online schooling as a solution. Although competing in high-level tournaments such as Grand Slams could be nerve-racking, she admitted her biggest challenge in Tennis is having a frantic schedule and had to stay apart from her family.

Vipasha had plenty of great players to follow in her youth, but claims Roger Federer and Victoria Azarenka was her favorites. She grew up worshipping the Federer and will be looking to add to his game some of the fearsome forehand and ferocious groundstrokes that the Swiss ace displayed in his prime.

The mind of Vipasha Mehra, who plays as an aggressive baseliner, is certainly her best attribute. The Pune girl has a high tennis IQ; with superb vision, an ability to dictate the tempo and an understanding of when to hit and when to control coupled with composed intelligence has been her major forte.

Currently studying neuroscience, the 18-year-old has a long way to go and many steps on the road, but having already had a No.1 Indian ranking, qualified for the 2020 Australian Open Juniors, playing regularly at college and youth national level and maintaining a similar level and continue growing her profile as well as a player; the future ahead for Vipasha is bright.

I first started playing tennis when I was around 8 years old. We had just moved to Doha, Qatar and my dad got tickets to watch the ATP tournament that was held there. My brother and I instantly fell in love with the game and the very next day, my dad enrolled us in tennis lessons at the same tennis federation. I knew tennis was something I could pursue when I was around 11-12 years old and just starting to play tournaments. I knew it was something I loved to do and never wanted to get off the court.

My first tennis hero was Roger Federer and Victoria Azarenka. It was one of Federer’s version of a junior racquet that I picked up when we went racquet shopping for the first time, so I quickly wanted to see who this guy was.

Of course, at the time I had no idea he was the GOAT but as I started understanding the game more, I really liked the way Federer was just always so calm. And for Victoria Azarenka, she was the first WTA player I remember seeing play live in Doha, and I just fell in love with the way she competes.

I am currently training at the University of Iowa, with head coach Sasha Schmid, and assistant coach Daniel Leitner.

Pre-competition, my parents always made sure I knew how proud they were of me. This would always help me with my nerves as I knew that no matter what the outcome of the match was – that I would not be disappointing them.

I would describe my game as an aggressive baseliner, and since I am left-handed, I would say Petra Kvitova.

Yes, I would say that I do put in a lot of effort on schoolwork and try my best. Managing sports and studies has been quite difficult. Prior to switching to online schooling - I would miss a lot of classes, and fall behind very easily. Once I made the switch, I was more flexible my tournament calendar and could do my schoolwork from anywhere in the world.

I guess my major highlights have been my ITF singles and doubles win in 2019. Finishing with a high junior-ranking and working my way up to becoming the number one ranked player in India has been an amazing achievement for me.

When it gets difficult during training, I like to remind myself of the purpose of why I am training and how far I have come. This always helps me as it gives me the motivation to work twice as hard till I get the results I want.

I follow the plan my strength and conditioning coach has made for me and make sure I finish all the workouts to the best of my ability each time.

The toughest aspect of being a tennis player is when you lose a match. As much as people say that you learn a lot from losing - overcoming that low and depressing feeling after a match is very tough for me.

The thing that I enjoy most about in tennis is how much I have gotten to travel and visit so many different countries. After a tournament is over, I like to stay a little extra and do some sight-seeing before heading back home to train.

I have had quite a lot of rivals in the past. I have moved around a lot - training in different countries so whoever was around with a similar ranking to me, we would always have a healthy rival. Some of these girls were like my best friends. Off the court - we would joke around a lot, but on the court- we meant business.

I remember during the first match I played; I didn’t really know the rules so I sat on the same bench as my opponent during the first break. My opponent then explained to me that the players sit on separate benches. It was very funny at the time because I really had no idea of any of the rules.

If I was not a tennis player, I would probably have tried to be a singer. When I was younger, I had a lot of interest in singing and I thought I was good but I clearly wasn’t.

For sure, I would have to say groundstrokes come easier to me. Between my forehand and backhand, I have days where one is easier than the other so they both keep switching.

My favourite social network would have to be Instagram. I get my daily dosage of memes and share them with all my friends.

My favourite tournament is the ITF junior Grade 3 and 4’s held in Harare, Zimbabwe.

Finally, what goals have you set for the coming years? And for the next years of your college/school?

For the coming years, a goal I have set is to make an impact on my team here at the University of Iowa and compete to the highest level every day.

In terms of schoolwork, I have chosen to study neuroscience which is mostly biology and the study of the brain. Keeping all options open for the future in terms of career opportunities and just focusing on enjoying every day of college life.