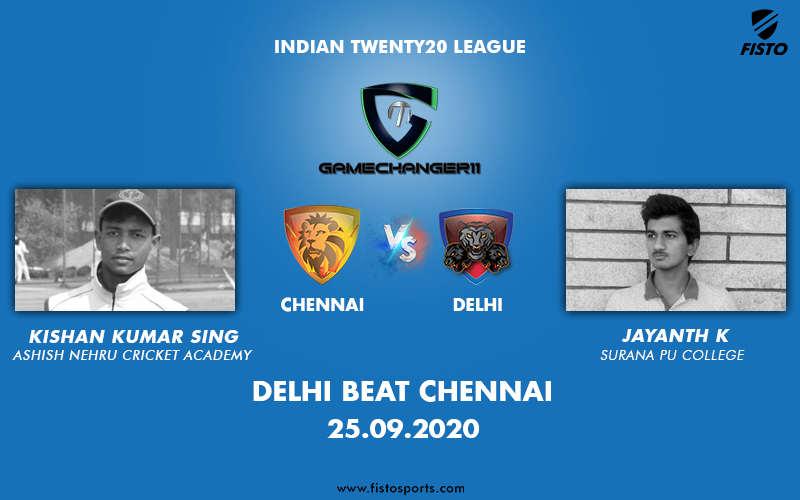 Delhi Capitals are the early IPL 2020 pacesetters as they racked up back-to-back wins after beating Chennai Super Kings by 44 runs in Dubai.

In the 7th IPL match between Delhi Capitals and Chennai Super Kings in Dubai, Delhi Capitals beat CSK by 44 runs in an emphatic manner. Apart from restricting DC at 175, and keeping its middle-order under check, Chennai never looked settled at this match.

Their batting order was once again full of confusion as Dhoni had chosen to come at number 6 though his team needed him the most at number four. Only Faf du Plessis 43 (35b, 4s x 4) really batted well. No other CSK batsmen looked focused at the match owing to DC’s stunning bowling spells one after another.

Prithvi Shaw is the Man of the Match for his match-winning knock of 64 off 43 deliveries.#Dream11IPL #CSKvDC pic.twitter.com/loN8BKkkyg

DC completely outwitted CSK’s mighty batting line-up by bowling in strict line and length. They didn’t give any opportunity to the dad’s army to hit big sixes and fours.

Though Delhi Capitals’ Avesh Khan was bit expensive as his spell gave away 42 runs from 4 overs with no wicket, but other Delhi bowlers kept their bowing economy rate under 6.

Delhi’s bowling mainstay and last match hero Kagiso Rabada dismissed Faf in the 18th over to shatter CSK’s all hope to inch closer to the target. Once Faf was dismissed, Ravindra Jadeja joined Dhoni, but they were playing just for formality. At the end of the 19th over, CSK needed 49 runs from 6 balls. So, the match already slipped out of their hands.

Rabada ended his impressive spell with 4-0-16-3, which compelled CSK to go into defensive mode. Chennai’s defensive batting kept on multiplying the asking rate and eventually at the last over – the match went out of their hands.

Batting first, Delhi Capitals added 94 runs for the first wicket in just 63 balls. However, at 9.4 overs, DC lost their well-set Shikhar Dhawan for 35 (27b, 4s x 3, 6s x 1). He had rotated the strike and hit occasional boundaries before Piyush Chawla struck him LBW in his third over.

Once again, Piyush Chawla was quite expensive giving away 30 runs in the first three overs before scalping the prized wicket of Dhawan. However, Chawla’s T20 experience came into play and he came back strongly picking up Prithvi Shaw in this last over. Chawla was successful in removing both the Delhi openers in his third and fourth.

Chawla leaked just 3 runs in his last over. Prithvi Shaw’s magnificent innings of 64 runs (43b, 4s x 9, 6s x1) came to an abrupt end when he tried to go over the top moving away from the crease, but missed the chance and eventually MS Dhoni dived forward and stumped him out.

Gradually, CSK took control of the match and kept the likes of Pant and DC Skipper, and Stoinis under control. Pant and Iyer added a 58-run partnership for the third wicket before Curran removed Shreyas Iyer 26 (22b, 4s x 1) caught behind at the hands of Dhoni. DC skipper Shreyas Iyer never looked settled in front of CSK.

At the end of the 20th over, Delhi Capitals put 175 runs on the scoreboard at the loss of three wickets. Rishabh Pant 37*(25b, 4s x 6) remained unbeaten at the innings break.

In our brief interaction with Jayanth K of Surana PU College, also an emerging cricketer at RX Cricket Academy, he pointed out that by restricting DC for 175, the Dhoni brigade did the right thing. As expected, CSK were fabulous in bowling and fielding. Apart from Jadeja’s 44-run from 4 overs, all key CSK bowlers restricted DC’s run flow.

What was missing from DC’s batting was that aggression, which they showed against Kings XI Punjab. Also, they should have played bit faster in the middle overs. Overall, 175 was a defending total on this pitch.

Starting cautiously, CSK openers Murali Vijay and Shane Watson started the run chase. But, Shane Watson 14 (16b, 4s x 1, 6s x 1) got out again after showing a glimpse of his good form. Axar Patel dismissed Watson at his second over when the Aussie veteran wanted the pull the ball – but it safely landed into the hands of Hetmyer.

Restricting Delhi Capitals’ strong middle order at 175 was a good comeback for the Dad’s army after they were mauled at the hands of Royals in their previous outing.

CSK’s batting order was almost similar to the last match. Kishan pointed out that CSK’s opening pair needed to play long innings, but both of its openers; Murali Vijay (10) and Watson were dismissed when CSK still needed 139 runs to win in 78 balls with 8 wickets in hand.

The entire responsibility of CSK’s run-chase was shifted to its strong middle order including the likes of Faf du Plessis, Dhoni, and Kedar Jadhav. At the end of 15 overs, CSK required 81 runs to win the match at 16-RPO.

However, apart from Faf’s innings, none of the CSK batsmen showed any intent to stick to the ground and score runs. As predicted, Dhoni once again delayed his batting order much to the dismay of the entire cricket universe.

Immediately after the match, DC climbed atop of the IPL points table. Shreyas Iyer-led team has now accumulated 4 points in their two matches with two consecutive wins. It seems Delhi Capitals will now look forward to retaining the momentum in their favor in the upcoming matches too. They are a perfect team with a never-say-never attitude and plenty of youngsters and experienced players in their side.