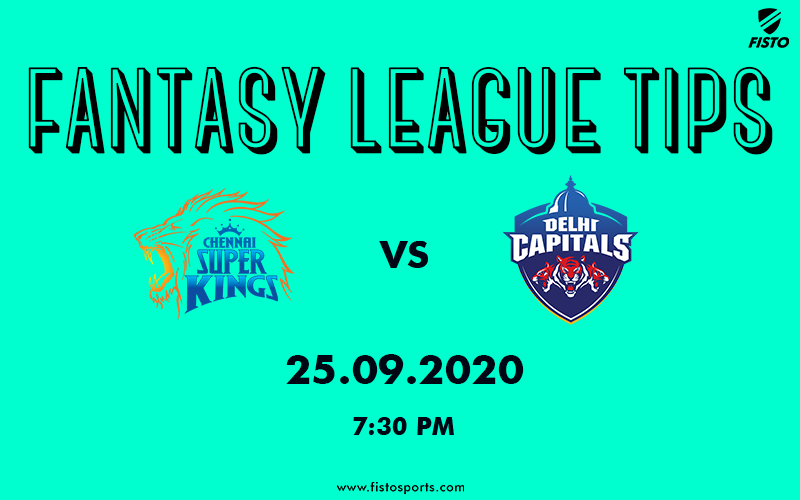 Wait – Don’t play that wildcard just yet! Here’s some quick tips to tweak the squad in time for CSK vs DC.

The 7th match of the Indian Premier League (IPL) will be played between Chennai Super Kings and Delhi Capitals at the Dubai International Cricket Stadium, Dubai.

Delhi Capitals after almost losing the game, came back strongly to win the super over against Kings XI Punjab. Their top order looked rusty. The Capitals would want at least one of their top three to score big in order to pose a challenge in front of the Super Kings.

Chennai, on the other hand, lost their encounter against Rajasthan. They would be looking to address their bowling woes and get to winning ways.

We are back with our fantasy tips to help you win big but before we start, for those of you still wondering which will be a suitable platform among many to play fantasy cricket this IPL season?  Don’t worry, we have it covered for you. Download GameChanger11 and explore fantasy cricket like never before.

Read: Can CSK get back to winning ways against a confident Delhi?

It is definitely a bat first pitch. Chasing is not easy here and the 3 games that happened here this season suggests the same. The captains need to break the trend that has been formed in this IPL of batting second.

The stats from T20Is suggest the same. In the last 5 years, teams batting first have won 70% of the matches here.

Faf du Plessis has scored two fifties in two games. He is in great form and is a must pick for your fantasy team. He can be a safe option for Captain.

Shane Watson looked in great touch against RR. He will be gutted to have missed out and will be eager to perform in this game.

MS Dhoni has still got those six-hitting abilities. If he comes in to bat higher, we might see a few helicopters flying around the ground.

Sam Curran has been good so far with the ball and has contributed with the bat as well. He can be a valuable pick.

Shreyas Iyer looked in fine form in the first game. The DC Captain could be a real game changer for his side.

Marcus Stoinis scored a blistering 53 of 21 balls in the first game. He then came out and took two wickets with the ball in the final over to tie the match. He will surely give you points.

Shikhar Dhwan missed out in the first game but we know how destructive Gabbar can be when he gets going. He will look to bounce back and score big in this match.

Kagiso Rabada bowled a brilliant super over, conceding only 2 runs and picking up 2 wickets. He also took 2 crucial wickets for 28 runs in his 4 overs.