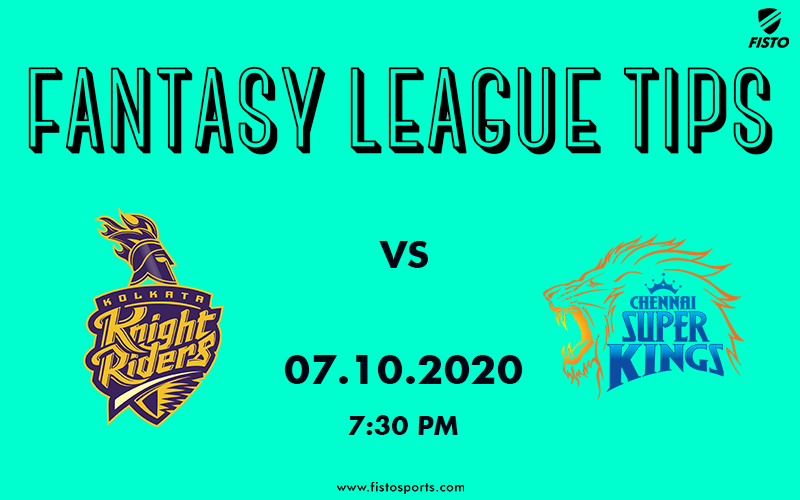 Agonising over who to pick? And when to bench them? Don't worry we have got you covered.

The 18th match of the Indian Premier League (IPL) will be played between Chennai Super Kings and Kolkata Knight Riders at the Sheikh Zayed Stadium, Abu Dhabi.

It’s the clash of the two heavyweights of the IPL, Chennai Super Kings and Kolkata Knight Riders. The two teams had a contrasting previous game. While a struggling Chennai, to everyone’s surprise, came out all guns blazing and won by 10 wickets against Punjab, Kolkata went down to Delhi in the quest of successfully chasing a highest IPL total.

With 2 wins each to their name, Kolkata and Chennai are placed 4th and 5th respectively on the points table. This match will be about getting a strong hold in the top half of the points table. Chennai have a settled team going into this game whereas Kolkata need to figure out their opening combination as Narine as struggled so far in the tournament.

Will KKR find a new partner for Gill or will they persist with Narine? We will have to wait and see. In the meantime, we are here with our fantasy tips to help you make an informed decision.

The Abu Dhabi track has played even between bat and ball. The average first innings score is 171 and a total of 80 wickets have fallen across 7 games.

It’s the fast bowlers who are more successful at this venue claiming 63.75% of the wickets as opposed to spinners who have taken only 32.5% of the total wickets.

Faf du Plessis is in tremendous form this season. It seems almost impossible to get him out. He has mustered 282 runs this season at an average of 94 and strike rate of 150.

Shane Watson finally got going for CSK scoring a brilliant 83 of 53 balls to take his team home against a hapless Kings XI side. With him being in form, CSK look a much more formidable side now.

Ambati Rayudu is in good nick. Although he didn’t get to bat in the last game which CSK won by 10 wickets, he will play a crucial role if CSK lose an early wicket.

MS Dhoni has looked good even though he has struggled to find the middle of the bat, he has managed to score some crucial runs. He might come up the order to give himself more time.

Andre Russell hasn’t been his previous self so far this season. Although he has shown glimpses of form in a couple of games. But he is covering up for his batting with the ball. He conceded only 29 runs in his 4 overs in Sharjah, where every other bowler was taken to the cleaners. He also picked up 2 wickets.

Nitish Rana was back in form and this will strengthen the KKR middle order. The Delhi batsman scored a fluent 58 in 35 balls in the previous game.

Eoin Morgan, the left hander almost took KKR home in the previous game against Delhi. He is looking in good form and will play a key role for KKR in the middle order.

Shubhman Gill has been impressive this season, holding the KKR innings together. He has amassed 152 runs at an average of 50.66 in 4 innings. KKR will be hoping for another good start from the youngster.