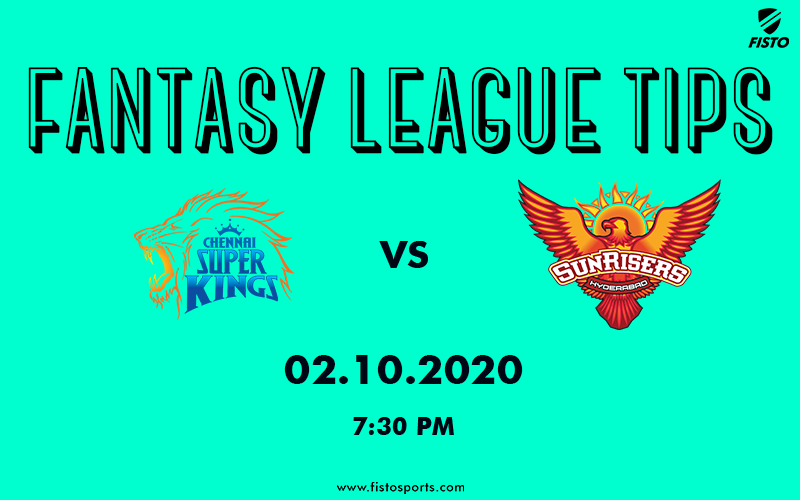 Here's everything you need to whip your team into shape ahead of CSK vs SRH of IPL Fantasy League.

Match 14 is here and we’re starting to recognise the characteristics of each team for the season ahead. The gaps in the league race have started to inrease and this might just be the time to get serious about your teams.

The 14th match of the Indian Premier League (IPL) will be played between Chennai Super Kings and Sunrisers Hyderabad at the Dubai International Stadium Dubai.

CSK are back from the much-needed break which would have helped them regroup and find the right combination going ahead in the tournament. The return of Ambati Rayudu will give them a boost ahead of this clash.

SRH have finally sorted out their middle order woes by including Kane Williamson into their side. They have found the right balance and now look a very formidable side.

Although both teams are reeling at the bottom of the table, they have a chance to bounce back from the initial setback and go on a winning spree.

Will the two teams win consecutive matches going ahead in the tournament or will they slump further? We will find out but for now let us help you make a winning team so you don’t slump down further.

We are back in Dubai where the quest for winning a game while chasing goes on. In the 6 matches played here so far, 4 of them are won by teams batting first while 2 ended up in a tie. The average first innings score so far is 179.

Faf du Plessis has scored 173 runs in 3 innings including two fifties. He is in great form and is a must pick for your fantasy team. He can be a safe option for Captain.

Shane Watson hasn’t fired in this season so far. Although he has looked good in patches and is only one innings away from finding his form. He would want it sooner than later.

Ambati Rayudu will be back in the side after recovering from injury. He seemed in ominous touch in the only game he played, scoring a classy 71 in 47 balls. He will provide the much-needed stability in the Chennai middle order.

Sam Curran has been good so far with the ball picking up 5 wickets at an economy of 7.33 in 3 matches and has contributed with the bat as well. He can be a valuable pick.

Jonny Bairstow continued his good run with the bat as he scored his second fifty of the season in just 3 innings. He has so far scored 119 runs and could prove to be lethal against a pale CSK bowling attack this season.

David Warner showed glimpses of form in the last innings. If he gets going, SRH could be on a roll. He will be safe pick for your fantasy team now that he has some runs under his belt.

Kane Williamson, the Kiwi batsman was finally included in the playing eleven and he didn’t disappoint, scoring a fluent 41 in just 26 balls. With him in the side, SRH middle order looks solid.

Rashid Khan finally got into his groove as he returned with match winning figures of 3 for 14 in his quota of 4 overs. Now that he has found his rhythm, he will be hard to stop.

It's been a tough run so far... Can CSK turn their fortunes around against SRH?