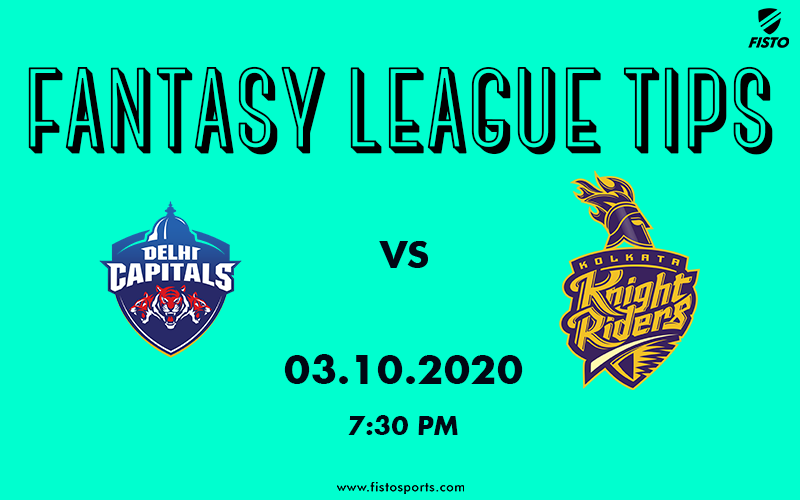 A tasty fixture this one so plan your line-up carefully.

The 16th match of the Indian Premier League (IPL) will be played between Delhi Capitals and Kolkata Knight Riders at the Sharjah Cricket Stadium, Sharjah.

The second match of the day will see Delhi Capitals lock horns with Kolkata Knight Riders. Both the teams are placed comfortably at 2nd and 3rd respectively at the moment. Delhi Capitals, after starting the season with a bang, lost their last game to then winless, Hyderabad. They will be looking to get back on track with a win here in Sharjah.

Kolkata Knight Riders are on a two-match win streak and will be looking to carry the momentum into this game. They have figured out their team balance and look like a force to reckon with.

Read:  Preview: Young guns in focus KKR looking to keep up with DC

It is a belter of a track at Sharjah and is evident from the two games that happened here so far. Both the games saw more than 400 runs scored in the match. To add to that, Rajasthan chased a record total here in the last game when they overhauled Punjab’s 223 runs.

The average first innings score is 220 but is it safe? We are not sure. With both teams boasting of big hitters in their ranks, we can expect another cracker of a match.

Rishabh Pant has shown glimpses of what he is capable of doing. He is Delhi’s highest run scorer so far and would love to add some more runs to his name in batting friendly conditions.

Prithvi Shaw, has looked good but he hasn’t capitalized on his starts barring the second game. Sharjah will be a great morale booster if he gets going.

Shikhar Dhawan, the left hander found some form in the last game. He will look to make use of it on a batting friendly track in Sharjah.

Kagiso Rabada has been the best bowler of this year’s IPL so far. He has scalped 7 wickets in 3 games. On a track that will favor the batsmen, he can be a real game changer for your GameChanger11 fantasy team.

Andre Russell, looked his destructive best in the previous game. Although his innings was cut short by Ankit Rajput while trying to go for another maximum, he will be the real threat for Delhi. Might see him come up the order considering small ground and flat track.

Pat Cummins has been bowling economically in the last two games and he has picked up a wicket each in these games. If he can bowl the way he has been bowling, he can be a great pick.

Eoin Morgan, the England Captain is back in form and has played two consecutive impact innings for KKR. He will want to make the most of the opportunity he gets in the middle.

Shubhman Gill, the talented young batsman showed why he is the most talked about youngster in Indian Cricket. He has scored 124 runs at an average of 62 in three innings. He could be a valuable pick.

Who will emerge on top in a battle between the two?