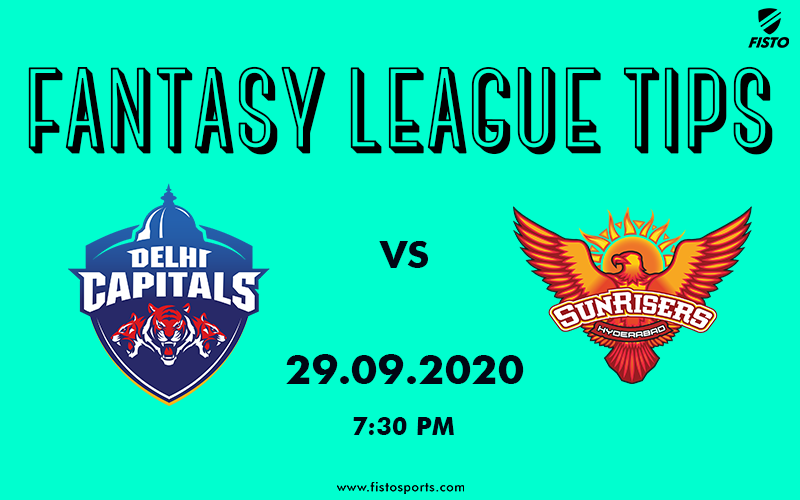 So, who's ready for even more cricket, eh?

We're only just approaching the second week of the IPL 2020 but the season already started seeing big scores in Abu Dhabi and Dubai too. Have the teams adapted well to the conditions? Or is the grass coming off the pitches a bit helping the ball to come on better?

Anyway, it’s a new day – let’s throw a penny in the fantasy cricket wishing well and hope we don’t stumble in and end up trapped at the bottom for all eternity.

The 11th match of the Indian Premier League (IPL) will be played between Delhi Capitals and Sunrisers Hyderabad at the Sheikh Zayed Stadium, Abu Dhabi.

After having two blockbusters in Sharjah and Dubai, the focus shifts to Abu Dhabi where Delhi Capitals and Sunrisers Hyderabad will face off in an all-important encounter. Will Abu Dhabi provide another thriller is yet to be known.

As far as teams are concerned, DC are comfortably placed at the top of the points table win two wins in their bag in as many games. Sunrisers Hyderabad, on the other hand, find themselves in a tough spot having lost both their games. They will be desperate to open their account and get that first win out of the way.

While SRH figure out a way to overcome their woes, we are here to help you overcome yours.

The average first innings score here this season is 166. Unless a team sets a well above par total in the 1st innings, teams batting second are more likely to win.

In the 3 matches at this venue, chasing team has won twice. Captains winnings the toss would field first as dew plays a major role here in the second innings.

Shreyas Iyer, the DC Captain, has looked good with the bat in both the matches. He can play according to the situation can will be a good pick for your fantasy team.

Prithvi Shaw, the young, talented opener showed exactly why he is regarded as the next big thing in Indian Cricket. He scored a fluent 64 in just 43 deliveries to give Delhi the start they needed.

Marcus Stoinis, the big Aussie all-rounder, has been used wisely by DC Captain, Shreyas Iyer. He is in good form both with bat and ball. If DC gets a good start again, we might see him come up the order.

Kagiso Rabada has been the best bowler of this year’s IPL so far. He has scalped 5 wickets in 2 games. He can be a real game changer for your GameChanger11 fantasy team.

Jonny Bairstow couldn’t do much in the last game as he was bowled by Aussie pacer, pat Cummins but he did score a fifty in the first match against RCB. He is in top form and is definitely the perfect candidate for Captain.

David Warner showed glimpses of form in the last game. SRH would be hoping he comes good today if they are to register their first win of the season.

Manish Pandey is in good form and it was evident from his innings against KKR in the last game where he scored a fine fifty. He will have the onus to provide stability in the middle order.

Rashid Khan has been economical with the ball. Teams have become smarter and they are trying to play him out but the wily Afghan would want to knock some wickets through his googlies.

Will this be the game where the pieces finally fall into place, kickstarting a fight for survival in the process, or will the Orange Army fall flat once again?