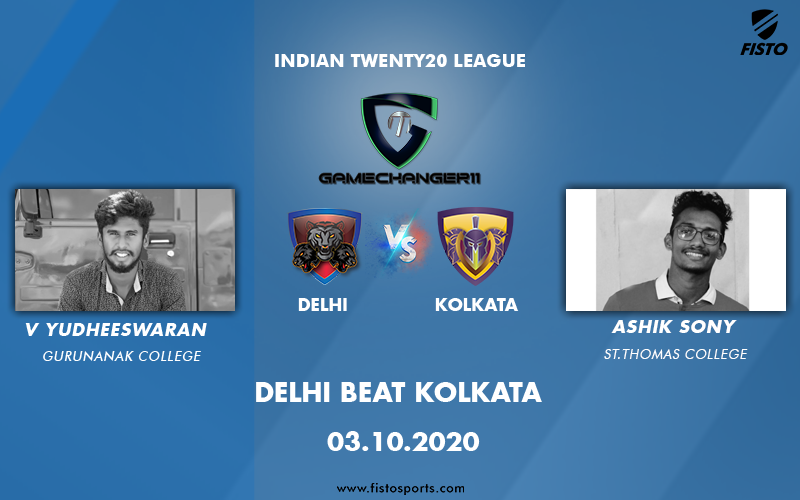 They say T20 is a format stacked in favour of the batsmen. It appears no one told Kolkata Knight Riders and Delhi Capitals, who shared 12 wickets for 438 runs in a thriller at the IPL 2020 which saw the latter prevail by 18 runs.

On Saturday, Delhi Capitals beat Kolkata Knight Riders by 18 runs in Sharjah. In what was expected to be a battle of goliaths Vs goliaths finished up as an easy win for DC.

Ever since Delhi hit 228 runs on the scoreboard, KKR never really focused on accomplishing the same. Kolkata kept on frequently losing wickets and once the asking rate climbed up 15+ RPO, the game was gradually slipping out of their hands. Nitish Rana 58 (35b, 4s x 4, 6s x 4) remained the top scorer for his team.

English batsman Eoin Morgan 44 (18b, 4s x 1, 6s x 5) played exceedingly well under pressure, but couldn’t drive his team to victory. Nonetheless, it was a valiant and heroic innings, though for a losing cause.

As India’s former capital (Kolkata – formerly, Calcutta) clashed head-on against India’s present-day capital (Delhi), in Sharjah, it was expected to be a battle of emotions charged by high-voltage drama. But it turned out to be a cakewalk for Delhi as they easily crushed Kolkata without much opposition.

Earlier, Kolkata did a big mistake by opting to field first despite winning the toss. As expected, Delhi Capitals spared none. They made a complete mockery of Kolkata’s lackadaisical bowing attack before setting up a formidable total of 228 runs on the board.

We talked with V Yudheeswaran, of Gurunanak College, Chennai, and he said DC were brilliant today. DC batsmen looked in complete control of the match. Iyer, Pant, Shaw and Shikhar – DC’s top order contributed well with the bat.

He further opined that Delhi Capitals have a good bowling line up and they need to create pressure on KKR from the very start to make their run-chase a difficult affair.

DC openers, Shikhar Dhawan and Prithvi Shaw, gave a flying start to the team adding 51 runs in just 5 overs at 10-RPO. The right-handed Prithvi Shaw was fabulous today hitting plenty of shots all across the ground.

His 41-ball 64-run knock with four boundaries and four sixes at a strike rate of 161 literally set the platform for DC’s batting carnage in the middle overs.

Shikhar Dhawan, on the other hand, played a good supporting role with his 16-ball 26-run knock. It was a small but useful knock for his side. Dhawan got out only at the 6th over while attempting an erroneous sweep shot that ended up in Eoin Morgan’s safe hands at square leg.

After Dhawan’s dismissal, KKR expected a dramatic comeback, but all their strategies failed. Soon, captain Shreyas Iyer came out in the middle and what followed next was a typical of Sharjah – raining boundaries and sixes.

Soon, Iyer and Shaw built a steady 73-run partnership for the second wicket, which paved the way for DC’s unbridled big total. Shaw got his 50 in style hitting Nagarkoti for a six at long-on, but the bowler soon got him out at the 13th over.

Meanwhile, Iyer quickly settled onto the ground and started going for big shots taking full advantage of KKR’s inexperienced bowling. No doubt, it was Iyer’s fabulous innings. He was inching closer to his maiden IPL ton, but eventually missed the landmark. Iyer remained unbeaten on 88* (38b, 4s x 7, 6s x 6). Leading from the front, Iyer added a 72-run stand with Pant for the third wicket in just 31 balls.

Pant 38 (17b, 4s x 5, 6s x 1) had played a good cameo role before falling prey to Russel’s Yorker-length delivery. Pant tried to emulate a helicopter shot, but it went up in the air and Mavi caught the same.

For KKR, nothing went as per their plans. The biggest dent to their plan was DC’s vehement performance with the bat. Starting from Shaw to Pant, Delhi’s top order went for a complete rampage. They were dealing in boundaries and sixes at ease.

KKR bowlers were trying everything possible to restrict them, but given a smaller enclosure at Sharjah, DC batsmen never looked back. With 228-runs on the scoreboard, they almost secured a win.

KKR came out to bat with its regular openers, Gill and Narine. Sunil Narine got out in the very second over as KKR lost their first wicket for 8/1. Nitish Rana and Gill tried to consolidate KKR’s run chase with singles, doubles, and boundaries.

Gill 28 (22b, 4s x 2, 6s x 1) supported Rana for a 64-run partnership in dire circumstances before going back to the pavilion. The partnership between Gill and Rana was going strong before Mishra struck.

The veteran leggie got off to a flying start giving just 2 runs in his first over. He troubled both Rana and Gill with his leg breaks, and turns. However, Gill completely misjudged his floater leading to a top edge and Pant took the catch. KKR’s scoreboard came down to 72/2 at 8.1 overs.

We discussed KKR’s strategy with Ashik Sony, ST. Thomas College, Thrissur (Kerala). He said Mavi and Morgan will be crucial to KKR’s batting. Both of them can accelerate KKR’s asking rate as per the requirement of the game.

The Turning Point of The Match

True to his words, Eoin Morgan at number 6 looked well-determined to chase DC’s total. Unfortunately, Nortje’s bodyline delivery got rid of Morgan at the 19th over and literally KKR’s all hopes soon turned into despair.

As far as KKR’s bowling is concerned, it was disastrous, too. KKR Skipper Dinesh Karthik tried as many as six bowlers today to contain DC’s free-flowing hits, but they failed.

Andre Russel (4-0-29-2) bowled comparatively well today keeping his bowling economy just around 7-RPO. He also dismissed the dangerous Pant at the 18th over otherwise Delhi Capitals’ score could have easily gone past 250-run mark! However, when it comes to batting, the West Indian all-rounder just scored 13!