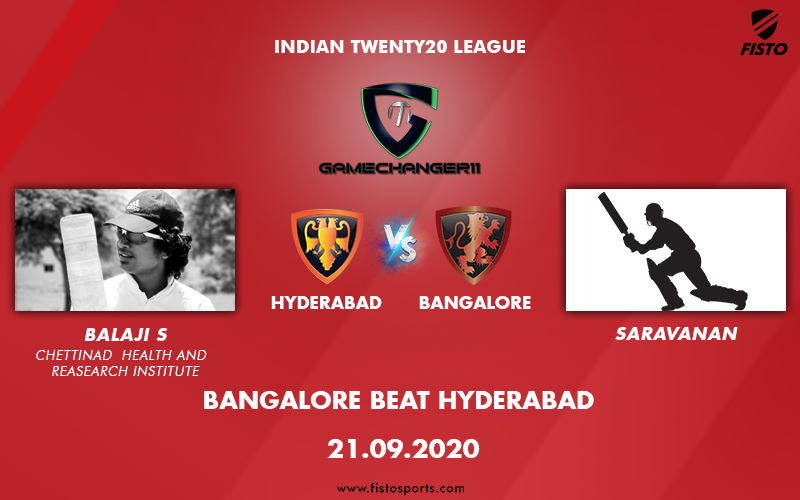 Bonkers. Absolute bonkers. That is how I would sum up today’s cracker of a match. Royal Challengers Bangalore (RCB) edge past Sunrisers Hyderabad (SRH) by 10 runs to script one of the most impressive wins ever. RCB finally bring in momentum at the initial legs of their campaign and they would be absolutely ecstatic after an all-round comprehensive performance from them. Plenty of positives for both the teams to take away. For me, the biggest highlight of the match was the kind of attitude Virat Kohli and company displayed after being under the pump during the latter part of the second innings.

The magical turnaround of events

Once ace English opener Johnny Bairstow got into the groove, everybody was assured it was an SRH win, that was on the cards. SRH literally slipped on a banana peel once wily leg-spinner Yuzvendra Chahal took the wicket of Manish Pandey in the 16th over (34 off 33). A 71-run stand between Johnny Bairstow and Manish Pandey made things look impossible for RCB. The Pandey wicket triggered a collapse and sent home some of the finest players including Vijay Shanker, Priyam Garg and Bairstow. The young duo of Abhishek Sharma and Priyam Garg succumbed under pressure and SRH wickets fell like a pack of cards. A dramatic turn-of-events indeed!

.@devdpd07 adds another feather to his cap of dream debuts. 🙌

A classy debut from the youngster hailing from Karnataka, Devdutt Padikkal set the stage on fire. With a calm and composed demeanour, he made the Australian captain play second fiddle at the other end. On the back of a mountain of runs in domestic cricket, Padikkal was sure to leave an impression and he did live up to his expectations. He neutralized the heavy amount of swing and movement upfront by Bhuvneshwar Kumar and Sandeep Sharma by his stupendous timing and hand-eye coordination.

Padikkal got off to a flying start in the 2nd over itself, after he smashed Sandeep Sharma for 3 fours and made a dream debut. Playing all across the park, Devdutt Padikkal's 56 of 42 balls included 4 boundaries. RCB heave a sigh of relief as they see signs of a long-term opening batsman in Padikkal. Something which was missing since they dropped Chris Gayle (the Universe Boss) from their squad in 2018. Some backing from the captain and a clear approach will make him a sure starter for RCB in this entire tournament. Surely notching up a debut half-century and words of praise and appreciation from his skipper in the post-match presentation would set him high on confidence. A prolific run-scorer in the domestic circuit, Padikkal oozes class and has a long future ahead with the RCB.

Unfortunate injuries in the match

It seems as if IPL and injuries are absolutely inseparable.

Another highlight of the match was a rather unfortunate one. Australian swashbuckling all-rounder Mitchell Marsh whose inclusion in the side ahead of Afghan all-rounder Mohammed Nabi raised a few eyebrows, was injured and has to hobble off the pitch in the initial phase of the game itself. Marsh tried stopping a single and eventually ended up hurting his ankle. However, he did not immediately leave the ground as he bowled two other deliveries before limping out in absolute distress. This was indeed a big blow for SRH as Marsh is quite handy with the ball and an absolute beast with the bat.

In the second innings as well, there was a horrific injury as Afghan all-rounder Rashid Khan suffered a dreadful injury while trying to convert a single to a double. He collided head-on with Abhishek Sharma which eventually led to Sharma getting run-out.

Ladies and gentlemen, presenting you the Man of the Match from tonight's game - Yuzvendra Chahal.#Dream11IPL #SRHvRCB pic.twitter.com/sI7OaF4IgX

Yuzvendra Chahal once again lived up the insane amount of expectations thrusted upon him and spun RCB to magic. He once again proved why he is Kohli’s trump card and why he can be given any responsibility at absolutely any stage of the game. With figures of 3/18 of his 4 overs, Chahal not only bagged himself the man of the match award but won his team, an absolutely thriller of a match. From the moment Chahal bamboozled Pandey, things started going south for the men in orange. They failed to capitalize on the 71-run partnership between Bairstow and Pandey and ended up losing a match, which was right in their pockets.

Balaji S from Chettinad college predicted that Devdutt Padikkal might make his debut instead of Parthiv Patel and he was absolutely right. A dream debut for the 20-year-old made sure RCB got off to a flying start. However, his team prediction suffered a setback as Khaleel Ahmed was not picked in the game and T Natarajan was given a go.

Saravanan stated in an exclusive conversation with Fistosports that ABD Villiers or Virat Kohli should take up the role of a sheet anchor. That was the case as after the departure of the openers Aaron Finch and Devdutt Padikkal, Kohli and ABD started taking 1s and 2s and steadied the ship of RCB. They also tried playing out Rashid Khan as he was extremely deceiving and economical.

Overall, it was an extremely thrilling match. There were numerous ebbs and flows and RCB registered a second straight win against familiar foes, SRH. A lot was said about RCB before the tournament, and the best way they could prove all their haters wrong, was by letting the match result do the talking.