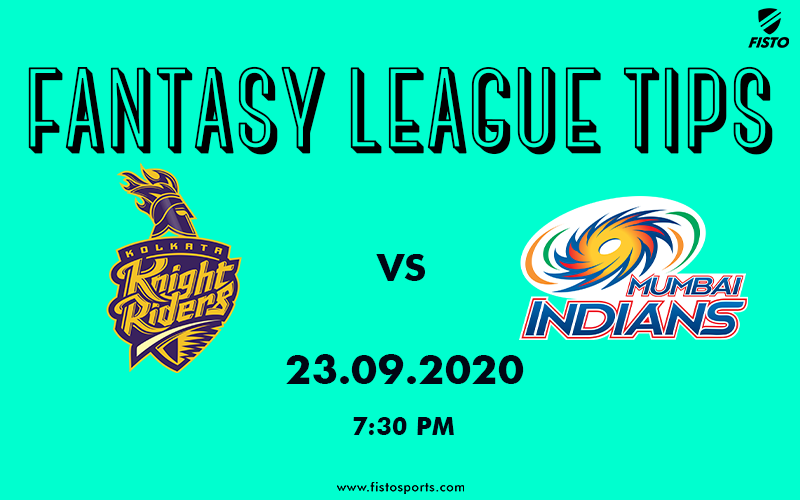 Wait – Don’t play that joker yet! Here are some quick tips to polish the team in time for KKR vs MI.

Match 5 of the Indian Premier League (IPL) will be played between Kolkata Knight Riders and Mumbai Indians at the Sheikh Zayed Stadium, Abu Dhabi.

Kolkata Knight Riders will now be facing what every other team have already faced, the challenge of picking the right combination. Mumbai, on the other hand, are yet to find a winning team in the UAE. They are on a 6-match losing streak here and would desperately want to break this streak tomorrow.

While Mumbai will be looking to break their streak, you shouldn’t let your winning streak die. And we are here with our fantasy tips to help you keep your streak alive.

Although the average score at Sheikh Zayed Stadium in 45 T20Is is 138, Mumbai Indians scored 162 runs in the tournament opener here which suggests that scoring runs isn’t difficult if batsmen apply themselves.

Teams batting first have won 20 games while teams batting second have won 25 games at this venue. Both Kolkata and Mumbai would want to chase after winning the toss.

Andre Russel was in supreme form last year mustering 510 runs at a strike rate of 204.81 in 14 games. He single-handedly won a few games for KKR. Come tomorrow, expect a similar performance by the big all-rounder.

Sunil Narine has turned out to be dangerous batsman up the order. As if his mystery spin wasn’t enough, he has added another dimension to his game and has been mighty successful. KKR would be hoping he gets them to a flying start.

Eoin Morgan, the World Cup winning captain, has been in fine form of late. He has the ability to rotate strike and hit big sixes if needed. He can be a risky option for captain but with risks comes reward.

Pat Cummins, the million-dollar man, will have a lot to prove for the worth he was picked up by KKR at the auctions. He has been bowling well for Australia and would love to keep his form throughout the IPL season.

Rohit Sharma, the hitman from India didn’t have the best of starts but he will be eager to get some runs under his belt. He will be opening the batting and we know how dangerous he can be up the order.

Quinton de Kock, the wicket-keeper batsman is in fine touch and was evident from his small innings against CSK. He can be a real game changer if he gets going. It will be safe to pick him over Dinesh Karthik.

Hardik Pandya hasn’t lost any of his swag during these 6 months away from the game. He got going from the word go in the first game against Chennai. He is a must pick.

Kieron Pollard is a proven match winner for Mumbai. The big Trinidadian led his team to an unbeaten CPL title. He scored 207 runs at a strike rate of over 200 in 7 innings. If he gets going, there is stopping him.

Can MI get back to winning ways against KKR?