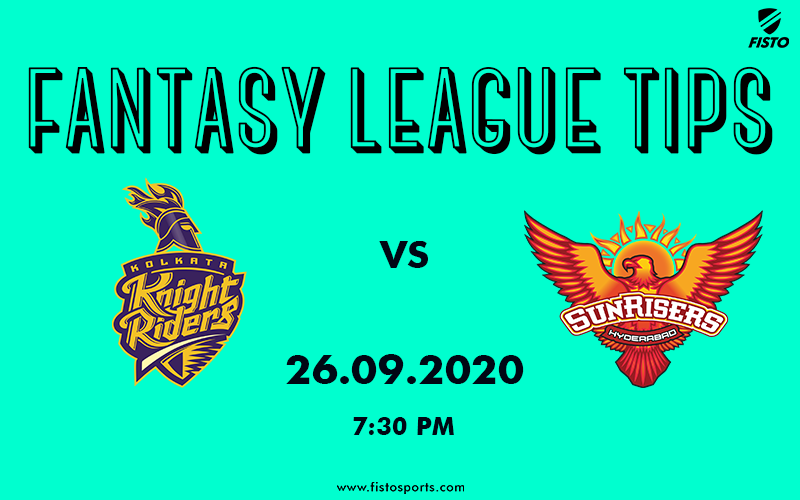 IPL Fantasy League is imminent as the plethora of cricket continues. First week was full of sixes, fours, wickets and entertainment. Will gameweek 2 continue in that vein? What to do with an underperforming squad? Is it time to play the wildcard? Read on to find out more.

After falling to defeats in their opening games in IPL 2020, both SRH and KKR will be looking to bounce back when they play each other in Abu Dhabi on Saturday.

The 8th match of the Indian Premier League (IPL) will be played between Kolkata Knight Riders and Sunrisers Hyderabad at the Sheikh Zayed Stadium, Abu Dhabi.

Both, KKR and CSK are coming off from a defeat in their opening encounters and will be looking to turn things around. While CSK already have a win under their belt, KKR lost the only game they played. They have a lot to ponder upon considering their performance both with bat and bowl. It wouldn’t be a surprise if they make a few changes. CSK, on the other hand, should go with the same eleven.

While the two teams decide on their playing eleven, we are here to help you decide yours.

Read: KKR vs SRH: Both teams looking to bounce back after opening defeats

The pitch is good for batting. The average first innings score from the two matches this season is 179. Dew is likely to play a big role here in the second innings.

Andre Russell didn’t have a great outing the other night but he will be eager to hit some balls out of the park come tomorrow.

Sunil Narine was economical with the ball and also picked up a wicket. Although he would be a risky option for captain as his batting is not consistent but he will surely give you points with his bowling.

Dinesh Karthik, the KKR Captain, came in to bat at No.3 and if bats there more often, he’ll get time to settle and then unleash his power hitting.

Shubhman Gill is a talented young batsman. He has the ability to adapt on any pitch. The onus will be on him to provide KKR with good starts.

Jonny Bairstow scored a well compiled 61 in the first match before he was out done by Chahal. He is in top form and is definitely the perfect candidate for Captain.

David Warner could be a risky choice considering his current form but his record in the IPL has been phenomenal. He will be looking to back his skills score some runs.

Bhuvneshwar Kumar has been exceptional with the ball over the years. Although he went wicketless in the first game, he conceded only 25 runs in his 4 overs. He can be a good vice-captain option.

Rashid Khan has a knack of picking wickets. He will get some help from the slow track at the Sheikh Zayed Stadium.

KKR v SRH - Both sides are looking to bounce back from opening game defeats. Who can do that by winning tonight?