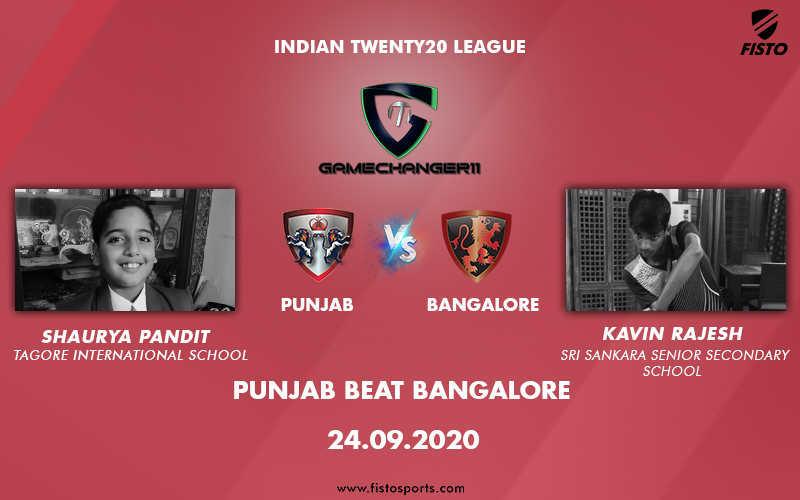 KL Rahul the hero as his unbeaten 132 steers Kings XI Punjab to emphatic win over Royal Challengers Bangalore in IPL 2020.

Kings XI Punjab registered their first win in the Indian Premier League 2020 thanks to a masterful innings from their captain KL Rahul. Rahul played the best innings of this year’s IPL and scored his second ever IPL hundred. He remained unbeaten on 132 and claimed a host of IPL records.

This is the fourth highest individual innings in IPL just after Chris Gayle (175*), Brendon McCullum (158*) and AB de Villiers (133*). However, this is the highest score by an Indian in the IPL and also the highest ever score by an IPL captain. This innings ensured a 200 plus total for KXIP and eventually took Royal Challengers Bangalore away from the match. It was overall a sad day from cricket due to the untimely demise of Dean Jones and all the players wore black armband in his honour.

Virat Kohli won the toss and sent KXIP hoping for an easier condition during the chase for the dew. Rahul and previous match top-scorer Mayank Agarwal looked solid from the beginning and added 57 runs in 7 overs. Kohli had to introduce the leg-spinner Yuzvendra Chahal to stop the flow of run who dismissed Agarwal for 26 in his first over. By this time, Rahul was set and started to dominate the bowling.

At the halfway stage, KXIP were on 90/1 and stage was set for KL Rahul to launch an assault. He added another 57 runs with Nicholas Pooran who scored just 17 off 18 deliveries and never looked set. Glenn Maxwell was also out cheaply as Shivam Dube had a great first spell. He took 2 wickets in his first 2 overs conceding just 10 runs. However, despite two quick wickets Rahul kept hitting the shots and added 78 runs off 28 balls in the unbeaten fourth wicket partnership with Karun Nair.

Again, Nair’s contribution was just 15. Virat Kohli made two huge blunders as he dropped Rahul twice in two consecutive overs and these misses had a telling effect in Punjab’s final team total. Rahul took 26 runs including three sixes of Dale Steyn’s 19th over who finished with 0/57 in his four overs. Only Chahal could contain somewhat and conceded just 25 runs in his four overs. Shivam Dube got 2 wickets but conceded 23 runs in his last over as KXIP recorded 206/ 3 in 20 overs. Rahul’s brilliant innings was decorated by 14 fours and 7 wonderfully times sixes.

Shaurya pandit from Tagore international school predicted a win for KXIP and he was right about the dependable KL Rahul who played one of his best T20 innings. Also, young Ravi Bishnoi had a memorable match along with other leg-spinners in the team like Murugan Ashwin and Glenn Maxwell.

The RCB chase never took off as they lost a wicket each in their first three overs. Sheldon Cottrell got the young Devdutt Padikkal out on a short ball as the young opener failed to replicate his first match performance. RCB management sent Josh Philippe as a pinch-hitter but Mohammad Shami got him plumb in front in his first over. Cottrell provided his bigger blow in his next over as he forced a false shot from Virat Kohli who gave Bishnoi his second catch of the match and was dismissed for just 1.

At 3 wickets for 4 runs it looked terrible for RCB at that stage. Aaron Finch and AB de Villiers tried to recover the innings but Punjab’s two young leg spinners Bishnoi and Murugan Ashwin got them out in space of four balls and effectively derailed the chase for Bangalore. Bishnoi built on his good showing in the first match and finished with 3/32. Murugan Ashwin was not part of the eleven in the first match and was brought in this match in place of Krishnappa Gowtham. The leg-spinner had even more impressive showing as he finished with 3 for 21 with two wickets in his third over to finish the match. Even Maxwell also got a wicket.

It is a sorry scorecard from RCB who were bundled out for 109 with Washington Sundar top scoring for them with 30. De Villiers, Finch and Dube were the other players to reach double figure for Royal Challengers Bangalore. They could not even bat for their full quota of 20 overs and were bowled out in 17 overs with a massive 18 balls to spare.

Kavin Rajesh from Sri Sankara senior secondary school hoped for a win for RCB based on their superior batting line-up. A failure for all their key players like Kohli, de Villiers and Padikkal ensured that they failed to start the tournament with bac- to-back wins. Their bowlers were also not up to the mark and maybe they will opt for another leg spinner in Adam Zampa in their next match.

After two matches both teams have 2 points each in the bag and have tough assignments in their respective next match. KXIP will face Rajasthan Royals on Sunday whereas RCB will play the defending champions Mumbai Indians on the following day.

Can KL Rahul guide KXIP to a fifth IPL title?