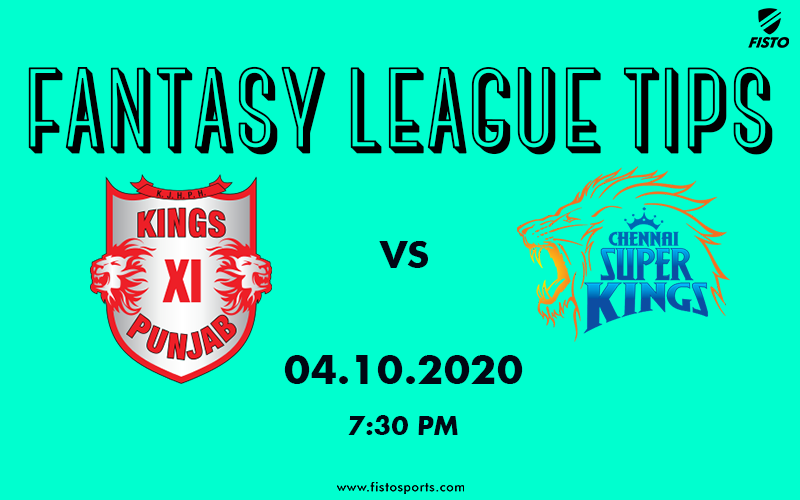 The 18th match of the Indian Premier League (IPL) will be played between Kings XI Punjab and Chennai Super Kings at the Dubai International Stadium Dubai.

Kings XI Punjab and Chennai Super Kings are currently reeling at the bottom of the points table with only one win each to their name in 4 games. This is a very crucial game for both these sides as they look to gain some momentum going head into the tournament.

Week 2 of IPL 2020 is coming to an end and if you are still wondering which will be a suitable platform among many to play fantasy cricket this IPL season?  Don’t worry, we have it covered for you.

It is a bat-first pitch in Dubai. The ball comes on to the bat nicely in the first innings. It gets a bit slow but the pitch doesn’t change much in the second innings. The dew might play a part,

The average first innings score is 177 and teams batting first haven’t lost a game here yet.

KL Rahul, the Punjab captain has looked really good in the tournament so far scoring 239 runs in 4 innings at an average of almost 80 with a hundred and fifty each. His century came at this very venue

Mayank Agarwal, the Karnataka batsman, has grabbed the Orange Cap from his Captain and would like to keep a stronghold on it.

Mohammad Shami has taken 8 wickets in the tournament so far and has looked in a good rhythm. He has been economical as well.

Nicholas Pooran has found his groove and is all set to make his form count. Look out for him as he can really take the game away from the opposition.

Faf du Plessis has been carrying the hopes of CSK single-handedly so far in this IPL. He has scored amassed 195 runs including 2 half-centuries.

Shane Watson hasn’t fired in this season so far. Although he has looked good in patches and is only one innings away from finding his form. He would want it sooner than later.

MS Dhoni has looked good even though he has struggled to find the middle of the bat, he has managed to score some crucial runs. He might come up the order to give himself more time.

Sam Curran has been good so far with the ball picking up 5 wickets in 4 matches and has contributed with the bat as well. He can be a valuable pick.