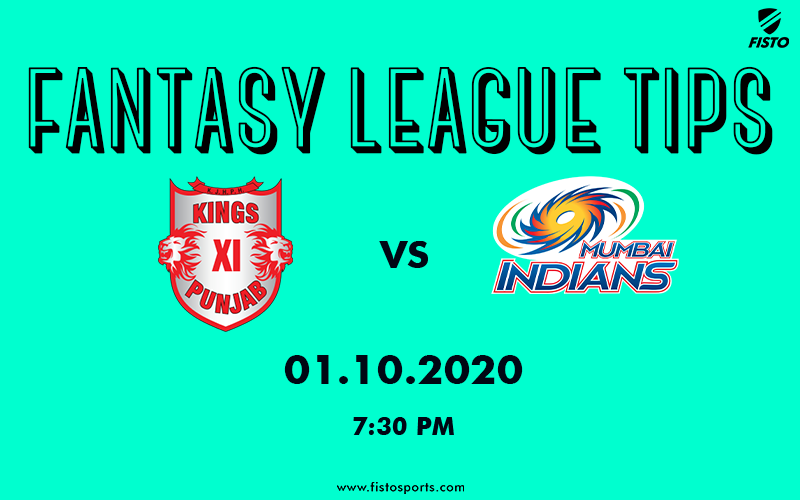 So, who's ready for even more cricket, eh?

We're only just approaching the second week of the IPL 2020 but the season already started seeing big scores in Abu Dhabi and Dubai too. Have the teams adapted well to the conditions? Or is the grass coming off the pitches a bit helping the ball to come on better?

Anyway, it’s a new day – let’s throw a penny in the fantasy cricket wishing well and hope we don’t stumble in and end up trapped at the bottom for all eternity.

Match 13 of the Indian Premier League (IPL) will be played between Kings XI Punjab and Mumbai Indians at the Sheikh Zayed Stadium, Abu Dhabi.

We are coming to the end of week two of this IPL season and it’s the clash between the teams from different halves of India. The Kings XI Punjab will be playing against the Mumbai Indians. Both the teams have played a super over each and lost. They have won just one game each out of three so this becomes a very crucial game for both these teams going forward.

Mumbai Indians have already played a game here, the tournament opener, which they lost against Chennai. They will have a slight advantage over their rivals. But Punjab will have lots of positives. They are playing well as team and just need to win those crucial moments in the game and things will turn around perfectly for them.

Week 2 of the IPL is about to end and if you are still wondering which will be a suitable platform among many to play fantasy cricket this IPL season?  Don’t worry, we have it covered for you. Download GameChanger11 and explore fantasy cricket like never before.

The track at Sheikh Zayed Stadium is slower than the two venues. The average first innings score in the four games this season is 165 runs.

Although the pitch is slow, it’s the pace bowlers who have taken more wickets here this season. They have accounted for more than 67% of the total wickets that have fallen here so far.

KL Rahul is the Orange Cap holder so far and has amassed 222 runs at an average of 111 and strike rate of 156.33 in three innings. In the three games, he has scored a fifty and a hundred.

Mayank Agarwal, the Karnataka batsman is just 1 run behind his captain in the race for Orange Cap and will be looking to over haul him today. He has scored his runs at an impressive strike rate of 176 with 11 sixes and 21 fours to his name.

Mohammad Shami is in great form with the ball. He has picked up 7 wickets so far in the tournament and is only behind Kagiso Rabada who also has 7 wickets but a slightly better economy rate.

Nicholas Pooran found some form in the previous game where he scored 25 runs in just 8 balls and struck 3 towering sixes in the process.

Rohit Sharma started off well in the last game before being caught trying to clear the long boundary. He is in good nick and has already scored a fifty. He will be looking to contribute more with the bat.

Ishan Kishan, the left-hander from Patna, returning from injury displayed excellent temperament and great power hitting which almost took Mumbai to victory. He hit 9 sixes in his innings of 99, He can be a real game changer in your fantasy team.

Kieron Pollard, the big West Indian almost won the game against RCB the other night with his 24-ball 60. Mumbai would be hoping for more such performances from him.

Suryakumar Yadav, although he missed out in the previous game, he will play a key role for Mumbai in the middle overs. He has been in good form and would like to make up for failure in last game.