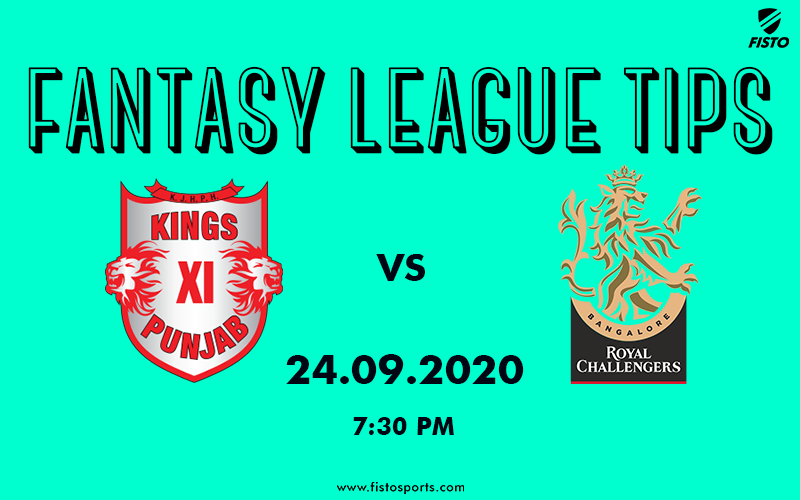 One has to remember that IPL Fantasy League is a marathon, not a sprint. So, even with a really poor outcome so far, there is nothing to feel demotivated by. Here are our tips in order to help make those difficult decisions a little easier!

It is time for game 6 of the Indian Premier League (IPL) to be played between Kings XI Punjab and Royal Challengers Bangalore at the Dubai International Cricket Stadium, Dubai.

Both the teams have played their opening games at this venue and are familiar with the conditions. While Kings XI Punjab lost out on Super Over against Delhi Capitals, the Royal Challengers Bangalore managed to walk away with a victory over Sunrisers Hyderabad.

The batting looks settled for the two teams; they still have to figure out the right bowling combination. With star studded batting line ups, we can expect a high scoring match.

Likewise, if you want to score high in fantasy cricket for this match, you are at the right place.

The average first innings score in T20Is at the Dubai International Cricket Stadium is 155. In the 30 games during this period, teams batting first have won 21 matches while teams batting second have won only 9 matches.

But in the two games here in this IPL, teams have decided to chase. Much to their disliking, the first ended up in a tie and the second was won by the team batting first.

It will be interesting to see what the Captains decide. Will they go with the current trend or with the previous records?

KL Rahul has scored over 1200 runs in the last two IPL seasons. He looked in good nick in the first game before being dismissed. The KXIP Captain will have a point or two to prove to his ex-franchisee.

Mayank Agarwal, the Karnataka batsman seemed in sublime form against the Delhi Capitals the other night, almost winning the game for his side. He could be a valuable pick for your fantasy team.

Glenn Maxwell, the Aussie all-rounder, didn’t have a great outing in the last game but he has been in good form of late.

Mohammad Shami has been mighty impressive with the ball in the last couple of years. He had a great opening game where he picked up 3 wickets for just 15 runs in his 4 overs. He can be a good vice-captain option.

Virat Kohli had a rare failure in the opening match for RCB but we all know what he is capable of. He will be my Fantasy Captain for this game.

AB de Villiers is in great touch. He scored a blistering half century in the last game and will be hungry for more.

Aaron Finch has been in form and he showed glimpses of it in the first game. He will play a crucial role for RCB at the start of the innings.

Yuzi Chahal has been the best RCB bowler by far. He picked up 3 crucial wickets against SRH to hand RCB the win.

Can KXIP overcome the controversy opener to get back on the winning track against RCB?