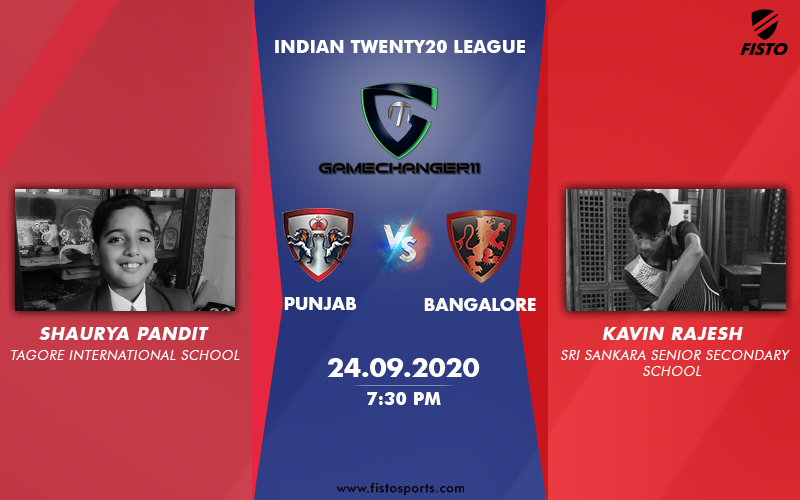 Following heartbreak in the opener against Delhi, it’s crucial that Punjab bounce back. It won’t be an easy test for Anil Kumble’s men as Bangalore will be buoyed by their win over Hyderabad.

Kings XI Punjab and Royal Challengers will play their second match on 24th September at Sharjah Cricket Stadium. This will be the sixth match of the tournament and the second match in this particular ground. The first match in Sharjah was a high-scoring encounter between CSK and RR where more than 400 runs were scored.

Kings XI Punjab could have a great start of this tournament but due to some lacklustre batting in the middle order and some poor luck which also included a controversial umpiring decision resulted in a loss for them through a super over. They did most of the things right. Mohammad Shami bowled a great spell to pick up three wickets and will hope to continue his form. The young leg-spinner Ravi Bishnoi had a good start to his IPL career and created lots of problems for Delhi batsmen, especially Rishabh Pant. Their overseas bowlers were not up to the mark and Chris Jordan’s 30-run last over costed them badly. But Jordan will know this is one off and will look to deliver a better performance in the next match.

Kings XI’s batting was dominated by Mayank Agarwal who played one of the best innings of this IPL and almost single-handedly took his team to the brink of victory. But with just one run to score off last three balls he faltered and eventually KXIP lost the match. He should be more determined to take his team to a victory this time around. Kings surprised most of the people by opting for Nicholas Pooran instead of Chris Gayle in their first match and would look to continue this strategy to give some confidence to the youngster despite two zeros in the previous match, one during main innings and one during the super over.

It was KL Rahul’s first match as captain, and it is not the time for final decision. Some of his decisions clicked and some did not. However, how he can maintain the triple responsibility of opening, keeping and captaining the side can decide the fate of KXIP this year.

Shaurya pandit from Tagore international school believes that KL Rahul-led side can claim their first win of the edition beating RCB.

After their defeat against Delhi Capitals, Kings XI Punjab are set to face RCB who are over the clouds after their first victory against SRH. Punjab’s opening pair should  be destructive Gayle and dependable K L Rahul followed by Mayank Aggarwal, Karun Nair and in middle order, Maxwell, Nicholas Pooran, Jimmy Neeshan can hit the ball hard in bowling department they have Shami and Chris Jordan to pen the attack and get the breakthrough Gayle, Nair and Maxwell bowl in between  THE HAVE A TRUMP CARD AS RAVI BISHNOI – THE SUPERB LEG SPINNER WHO CAN TURN THE GAME ANYTIME

Kohli must be under some pressure after his failure in his previous match against SRH and the main threat is Mr.360 degree – AB Devilliers

They must get him early and while batting, they need to play Chahal carefully but positively

RCB had lost most matches while defending the score.

After starting with defeats in last three seasons, Royal Challengers registered a victory in their first match of this tournament. Devdutt Padikkal is their biggest finding from the first match who was able to convert his great domestic form to a bright start in IPL. However, whether he can handle the pace of Shami and Sheldon Cottrell will be interesting to watch. Out of the other big guns of RCB, only AB de Villiers had an innings of note in their first match. Virat Kohli had a sedate start to his 2020 IPL campaign and will look to get back to form sooner rather than later.

The RCB bowling looked in good shape, although it has to be acknowledged that the Sunrisers Hyderabad’s middle order was an inexperienced one who collapsed in front of international bowlers like Yuzvendra Chahal and Navdeep Saini. Chahal bowled the key spell in the match to get the man-of-the-match award and Saini also took two wickets to dismiss Rashid Khan and Bhuvneshwar Kumar. Umesh Yadav’s form would be slightly concerning for them.

RCB played with some interesting choices of overseas players in their first match. They opted for young Josh Philippe as their wicket keeper over Parthiv Patel, a move which helped them to play Padikkal as opener. They also opted for experienced Dale Steyn as Chris Morris was not 100% fit. They may continue with Steyn but in case Morris gets fit they may bring him in the eleven as Morris can provide better balance with his all-round skill.

Batting: RCB’s Devdutt Padikkal was really the standout performer for RCB vs SRH’s good bowling lineup. One thing worth noting is that Aaron Finch always is slow in his start to the innings. Only when he gets settled does he go for the big shots. So, Padikkal should have a similar attacking approach to this game that he had to the last one to remove early pressureon Finch to score at a fast rate.

One more thing that went well for RCB was that AB Devilliers batted until the end of the innings to raise RCB’s total to a respectable total. So, one of either Virat Kohli or ABD should bat until the end on a difficult Dubai pitch for RCB’s score to be a challenging one as they are batsmen who can keep the scoreboard ticking without taking too many risks.

Bowling: It’s fair to say that Umesh Yadav didn’t have a good time with the ball last time around. One thing RCB could do is bring in a spinner for Umesh possibly Pawan Negi (or drop Phillipe and bring in Zampa) because it is very difficult to face a spinner on the Dubai pitch as Yuzvendra Chahal proved against SRH. The other bowlers were good and should retain their place in tomorrow’s match.

As I stated earlier RCB need a spinner in for a fast bowler hence, Negi’s selection as he’s a decent left arm spinner who will be difficult to face in the Dubai pitch. The selection of Morris is because RCB didn’t have a proven and experienced finisher in case of a batting collapse. Phillipe and Dube can hit the ball a long way but Morris has proven himself under pressure that he can score a 10 ball 30 easily and is also a handy bowler who can bowl in case one of the bowlers have an off day. So, this means Devilliers will have to keep wickets which may seem a bit of a risk but he has proven himself behind the wickets so he should be up to the task.

Two teams have played 24 matches so far with a tally of 12 wins each. This match at Sharjah will take one side ahead of another. No wonder this will be an exciting encounter.

Glen Maxwell: Maxwell scored just one run before being dismissed as part of a KXIP mini-collapse during the first match. However, against RCB he would like to stamp his authority. His battle against Chahal should be fascinating to watch. However, the first match in Sharjah resulted in 33 sixes and if Maxwell gets set and receive few deliveries in his arc, we should be in for quite a few maximums.

Mohammad Shami: Against Delhi capitals Shami’s fiery first spell ensured that the top order was blown away and Shreyas Iyer and Rishabh Pant had to do consolidation job for a long time. With even bigger names in RCB line up how Shami’s four overs go should have an impact on the match result.

AB de Villiers: de Villiers started the tournament with a nice fifty and maintained a strike rate of 170 in that innings. Along with Virat Kohli he is one of the batting maestros for RCB. With the small boundary in Sharjah there should not be any surprise if he can go to his blistering best.

Navdeep Saini: With Umesh Yadav not having a great start of this year’s IPL, there would be more responsibility on the young shoulder of Navdeep Saini. The young pacer has progressed quite significantly over last 12 months but RCB management would like to see him perform consistently to get the dependable tag.

Captain/ Vice Captain: With both teams having quite a few superstars it will be a tricky choice between Kohli, Rahul, and Chahal. Based on first match performance picking Chahal as a captain will be safer. Mohamamd Shami from Kings XI Punjab can be allotted the designation of Vice Captain.

Grand League Captain: Tomorrow’s match is going to be very important for Kings XI Punjab. KL Rahul is expected to score a big knock and lead from the front especially after his poor first match show.

Can KXIP get back to winning ways against RCB?