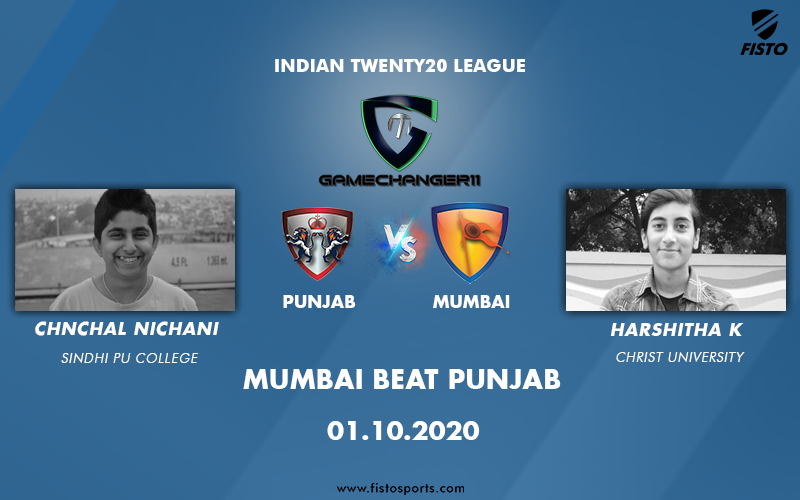 Mumbai Indians Vs Kings XI Punjab turned out to be a one-sided affair after men-in-blue completely outmaneuvered Punjab, beating them by 48 runs in Abu Dhabi.

On Thursday, Punjab’s killer instinct was missing while chasing Mumbai’s big total of 191. At the end of 20 overs, KXIP could manage only 143/8 with none of their batsmen crossing the 50-run mark. This was the same team that scored over 200+ run in their previous match against Rajasthan Royals.

Thanks to MI’s disciplined bowling and fielding that denied Punjab any opportunity to make a comeback into this game. After KL Rahul’s early dismissal, it seemed that KXIP were playing for formality.

They weren’t even attempting big sixes and boundaries apart from Nicholas Pooran’s heroic knock of 44 down the order.

Earlier, Kings XI Punjab won the toss and opted to field first. Mumbai Indians played attacking yet sensible cricket. Their intent was clear – to put a big total on the scoreboard, which they eventually did.

Barring De Kock, Mumbai batsmen were in complete control today and got plenty of runs. De Kock once again struggled with the bat. He couldn’t get off to the mark in the first four deliveries before Cottrell got him out for a duck.

MI lost their first wicket in the very first over at 0.5 overs. The next man in, Surya Kumar Yadav (10), was expected to play a big knock for the side, but Shami’s direct throw got him run out when he was attempting a short run.

After losing a couple of quick wickets at 21/2 in 3.5 overs, Mumbai Indians were in deep trouble. They were looking for a big partnership. Soon, left-handed Ishan Kishan joined Rohit Sharma, and both of them tread cautiously with singles and doubles.

Ishan Kishan 28 (32b, 4s x 1, 6s x 1) once again proved useful with the bat while adding a 62-run partnership for the third wicket with Captain Rohit Sharma. Meanwhile, the MI skipper kept on hitting good boundaries and sixes.

Rohit Sharma 70 (45b, 4s x 8, 6s x 3) was at his best today. He made the complete mockery of KXIP bowling producing one fantastic shot after another all across the ground, and into the stands as well.

Before Shami sent Rohit Sharma back to the pavilion, MI skipper already smashed 22 runs in James Neesham’s over.

Once Rohit Sharma got out, MI’s scorecard came down to 129/4, with Pollard and Pandya at the helm of the remaining 18 balls.

They were in good form and went on a rampage against the Punjab bowlers.

Both the right-handed pair accumulated around 61 odd runs in the next 3 overs at around 20-RPO. It was a pure carnage, with raining boundaries and sixes.

Earlier, we talked to Chnchal Nichani, Sindhi PU Collge, Bangalore, about this match.

As she pointed out that Pollard and Pandya can be a great danger to Punjab, the same happened at tonight’s match. Both the right-handed batsmen went on the beast mode and put a formidable total on the scoreboard for their side.

She also stated that KXIP Punjab bowlers have to contain runs at the death overs, which they eventually failed.

The vulnerabilities of Punjab bowlers at death overs came out in the open when Pollard and Pandya started hitting big shots all across the ground.

She also felt that losing Mayank and Rahul early in the innings can be ominous for the team Punjab.

As the result came out, KXIP lost the match by 48 runs!

KXIP never looked in form. They kept on repeating one mistake after another. The first mistake was Punjab skipper KL Rahul’s decision to opt for field first after winning the toss. Had KL Rahul opted to bat first, they could have easily put a big total on the scoreboard.

It might have made MI’s task difficult as any chase at a big ground like Abu Dhabi won’t be easy under any circumstances.

Once MI got to bat first, they made the best out of it by putting a big total on the scorecard at 9.5-RPO. Punjab bowlers were completely helpless in front of MI.

Except Cottrell (4-0-20-1), no other KXIP bowlers seemed to be posing any threats to Mumbai batsmen.

Chasing 192, Punjab faced a big blow when its in-form opener Mayank Agarwal 25 (18b, 4s x 3) was cleaned bowled by Bumrah at the fifth over. Soon, Karun Nair also departed for a duck.

Skipper Rahul had a big responsibility on his shoulder before succumbing under pressure. KL Rahul (17) tried a paddle sweep off Rahul Chahar, but the ball skidded through and disturbed the leg bail. And, thus, Punjab lost their skipper at 60/3 after 9 overs.

In Kings XI Punjab’s previous matches, its openers have contributed heavily with the bat, and its middle order didn’t get enough chance to play out in the middle. So, it was a big challenge for Punjab’s middle order to negotiate MI’s overs. But all of them failed.

Harshitha K, Christ University, Bangalore, said that MI executed its plan well. First of all, they posted a big total and also successfully dismissed Punjab’s openers early in the game. Once the openers were gone, Punjab fell into big trouble.

It was a good match from Mumbai’s point of view, as they claimed a victory after a couple of straight defeats. For team Punjab, they would like to forget this match at the earliest.

Apart from Nicholas Pooran’s 44 (27b, 4s x 3, 6s x 2), no other batsman showed guts to even fight against MI’s disciplined bowling.

After 16 overs, Punjab still needed 80 runs to win from 24 balls with 5 wickets in hand. With an asking rate of 20-RPO, Punjab didn’t pose any challenge to MI. Taking advantage of Punjab’s poor performance MI claimed a stunning victory against the men-in-red. Bumrah, Chahar, and Pattinson claimed a total of Punjab’s six wickets with two wickets each.

Can MI go all the way to clinch 5th IPL title this season?