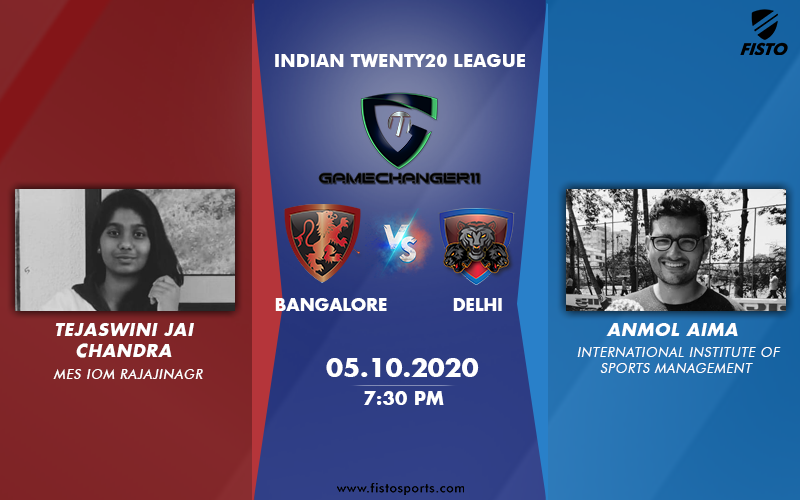 IPL table-toppers Delhi Capitals (DC) and Royal Challengers Bangalore (RCB) have set the temperature soaring with their impending clash tonight in Dubai. Over the last few days, both DC and RCB have been playing aggressive cricket keeping their opponents at bay.

Bangalore won their last clash against in-form Rajasthan Royals by 8 wickets thanks to Kohli’s magnificent 72* on Saturday. The same day, Delhi Capitals beat Kolkata Knight Riders by 18 runs despite some dramatic twists and turns in the late overs owing to Morgan and Tripathi’s quick-fire 78-run stand for the 7th wicket in just 5 overs.

Until now, both RCB and DC have accumulated 6 points each from 4 matches that they played so far. RCB Vs DC match will be a battle between the equals. Both teams can outwit each other at any moment of the game owing to the presence of some big match-winners in their teams.

In the last match, Shreyas Iyer proved how dangerous he can be in the middle overs. It was DC skipper’s swashbuckling 88* (38b, 4s x 7, 6s x 6) that literally took the game away from KKR. Nevertheless, Pant’s blinder of 17-ball 38 at the crucial time is equally praiseworthy.

Obviously, with a gigantic total of 228 runs on the board, DC literally won half of the battle then and there.

Likewise, even Prithvi Shaw’s flamboyant 66-run knock up the order was extremely crucial for his team. His innings contributed towards a couple of big partnerships for DC in the form of a 56-run stand for the 1st wicket with Dhawan, and then a 73-run partnership for the 2nd wicket with Iyer.

If DC’s top order once again create a run-riot in Dubai, then things won’t be too easy for RCB.

Regarding Delhi Capitals’ team strategy, we discussed with Anmol Aima of IISM, Mumbai. He said that DC Vs RCB will be an interesting clash with Delhi having a slight edge over RCB. He further opined as follows;

Delhi capitals have had a good start but found it difficult to deal with Rashid khan against SRH, which handed them a defeat.

Now against RCB they face a similar challenge in Yuzvendra Chahal and an in-form Washington Sundar. DC have the option to get in Carey who plays spin very well and will get that experience.

In terms of bowling, Delhi have a well-rounded attack and will have to try and pick up early wickets against the top-heavy batting lineup of RCB while Ashwin and Axar will look after the middle overs. DC will have to make sure that they don’t let Kohli settle and attack De Villiers early.

From the batting, bowling to fielding, Delhi Capitals are playing like a soon-to-be champion. With Shaw, Pant, Iyer at the top, and Stoinis plus Hetmyer down the order, it would be too difficult for RCB to get all of them dismissed at a low score. If a couple of them strike, and hit runs, then RCB bowlers will be at the receiving end.

Not to forget Delhi’s fabulous bowling. They have been doing a fantastic job for the side picking up important wickets at the crucial times. If Harshal Patel hadn’t taken a couple of consecutive wickets on Saturday against KKR, then Kolkata might have won the match.

Similarly, Nortje’s sensible bowling at the death overs is an asset to any side. His dismissal of Eoin Morgan literally sealed the fate for Delhi against Kolkata.

Last but not the least, Kagiso Rabada, with 8 wickets under his kitty, is already in good. He’s currently one of the leading contenders for the IPL purple cap. He’ll be a big threat to RCB’s much-decorated top-order batsmen

In an exclusive chat with Tejaswini Jai Chandra, MES IOM Rajajinagr, Bangalore, the aspiring player felt that RCB Vs DC will be a challenging game as it has strong players from both sides.

He further stated it will be all about RCB 's strength – batting order. They have got some big names starting from Padikkal and Aron finch – the best combo to bat on top and build a good partnership.

The rest of their batsmen are equally strong enough. With AB Devillers and run-machine Virat Kohli at the helm in the middle order – no target is too big for them. Also, Shivam Dube is in good form and he can contribute well with the bat.

When it comes to bowling, Both Navdeep Saini and young Udana can deliver fiery spells from the start. Both can easily restrict DC’s flow of runs. RCB can then bring in Chahal and Washington Sundar into the attack in the middle overs

Devdutt and Aaron Finch are likely to give a flying start to RCB against DC. They can dismantle DC’s well-balanced bowling attack while setting the tempo of RCB’s batting. RCB have some of the finest finishers in the squad including Kohli and AB Devilliers, who know how to amplify the run-rate when needed.

RCB speedsters Saini and Sunder are likely to start the innings with some Yorker-length deliveries straight into Dhawan and Shaw to trouble them from the very first over! Then, Chahal, the IPL purple cap holder, will be entrusted with the task of restricting DC’s batsmen in the middle order.

Key Players To Watch Out For

Shreyas Iyer (Delhi Capitals): Shreyas Iyer is a batsman of repute. He leads his side from the front. Moreover, he’s likely to play consistently well at this IPL. He’s already accumulated 170 runs from 4 matches with at an average of 57 and a strike rate of 150+. He’s never got an IPL ton, maybe he will get that against RCB tonight!

The Protea’s pace battery has been bowling exceedingly well throughout this season. He’s already got 44 IPL wickets under his kitty from 22 matches. Rabada knows how to give a breakthrough to his team in crucial times. He was a bit unsuccessful on Saturday leaking 51-runs against KKR for 1 wicket. But, the 25-year-old has a fantastic record against RCB with a tally of 6 wickets from two matches!

Virat Kohli has 5502 IPL runs and 5 centuries to his credit. Every time, he goes out to bat, fans want him to score big against his opponents. This IPL, his performance has been very ordinary so far. He got just 90 runs from 4 matches. However, Kohli scored 849 runs at an average of 65 against Delhi.

Fans drool over his excellent flexibility while he bats or fields. South Africa’s very own Mr.360, is capable of hitting plenty of sixes against any bowlers. This year, ABD is absolutely phenomenal. He already got 146 runs at an average of 73. Don’t forget Ab De Villiers also has 430 runs against team Delhi at an average of 61.