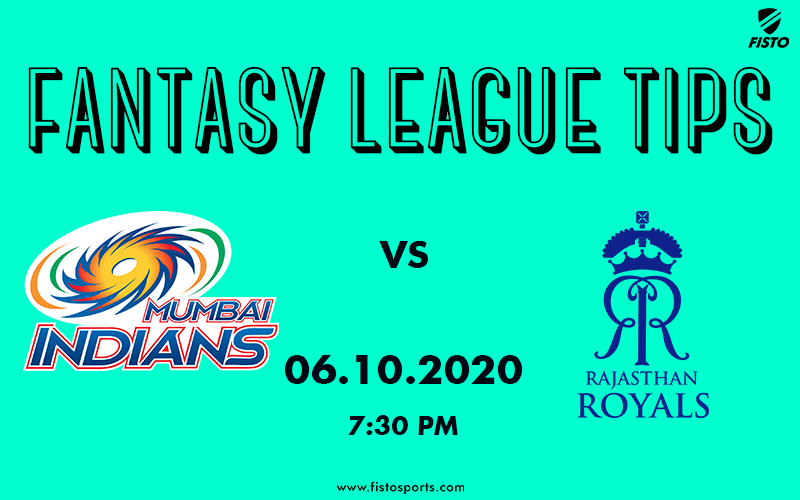 Here's everything you need to whip your team into shape ahead of MI vs RR of IPL Fantasy League.

The 20th match of the Indian Premier League (IPL) will be played between Mumbai Indians and Rajasthan Royals at the Sheikh Zayed Stadium, Abu Dhabi.

Mumbai Indians are looking dangerous with every passing game. They are a settled side with depth in their batting with Pollard and Pandya finding form and their bowling has looked sharp as well. Mumbai being the only team to not have conceded 200 runs in Sharjah, it will be difficult for Rajasthan to score freely against this formidable bowling attack.

Rajasthan Royals come into this game having lost to RCB, and will be looking to find a way to overhaul this strong MI side. They haven’t looked comfortable at all barring their games in Sharjah. Their top order will have to take responsibility and do bulk of the scoring.

The pitch at sheikh Zayed stadium is pretty even when it comes to contests between bat and bowl. There have been a couple of high scores. Teams batting first and teams chasing have won 3 games apiece.

The average score in the first innings is 168. Spinners have taken 34.84% while pacers have taken 60.60% of the total wickets that have fallen here.

Rohit Sharma is in good form. He has already score 176 runs in the tournament so far at a strike rate of 144.26 in 5 innings. Having missed out in the previous game, he would like to bat responsibly in this game.

Ishan Kishan has been playing amazing cricket. He has already score 158 runs at an average of over 50 in just 2 innings. He is likely to give you those extra points.

Kieron Pollard, the big West Indian is in serious form. He has mustered 163 runs at an average of 163 and strike rate of over 200.

Hardik Pandya, along with Pollard, has found his touch and look in great hitting form. They both can destroy any bowling line up on any given day.

Steve Smith has missed out in the last 2 games and will be eager to some runs under his belt. He has scored 127 runs so far at a strike rate of 147.67.

Jofra Archer is in good form both with bat and bowl. He has picked up 4 wickets at an impressive economy of 6.75 runs per over and has hammered 8 sixes in just 25 balls he has faces so far in this IPL.

Sanju Samson missed out in the previous game. He will consider himself unlucky but the wicket keeper batsman will have to play another impact innings if RR has to overhaul MI.

Jos Buttler has looked good although he hasn’t been able to convert his starts into a big score. Today will be an opportunity for him to do so against the best team in the tournament.

Can RR make a comeback statement?