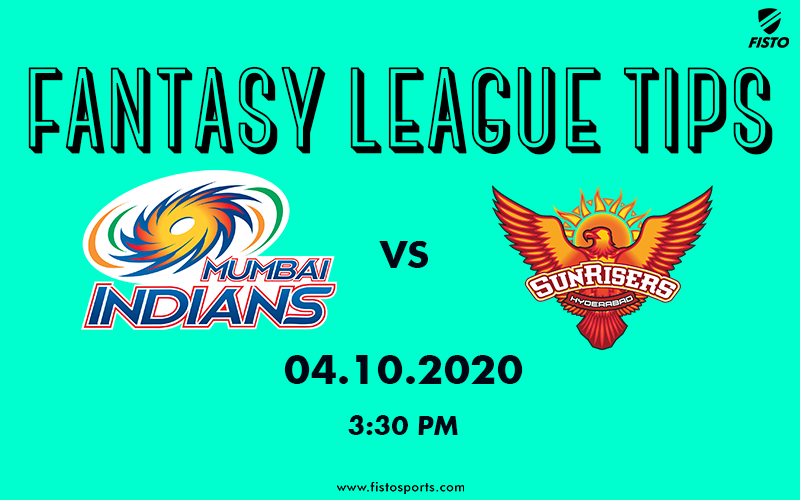 The 17th match of the Indian Premier League (IPL) will be played between Mumbai Indians and Sunrisers Hyderabad at the Sharjah Cricket Stadium, Sharjah.

In what should be an exciting encounter, Mumbai Indians will take on Sunrisers Hyderabad. It’s the battle between best batting side and the best bowling side in IPL. Both these teams have found the right combination and have gained momentum after a slow start. But who will overcome this enticing battle? To make it more interesting, both of them have won an equal number of encounters against each other and this will be a battle to prove their supremacy.

While MI and SRH figure out a way to overcome each other, we are here to help you overcome your friends in your fantasy battle for this exciting match.

Before we start, for those of you still wondering which will be a suitable platform among many to play fantasy cricket this IPL season?  Don’t worry, we have it covered for you.

It is a belter of a pitch at Sharjah with every game producing over 400 runs and close finishes. The average first innings score is 222.

With small boundaries in Sharjah, it’s tough to be a spinner. Out of the 33 wickets that have fallen here in three games, spinners have accounted for only 8 wickets which is a mere 24.24%. Teams might consider this fact and go with more pace bowling options.

Rohit Sharma is in good form. He scored a He scored a brilliant fifty in the last game and will be looking to continue from where he left. He has scored 170 runs with 2 fifties. He will be my captain for this game.

Ishan Kishan, has just played two games and is already in the top 10 run getters in the so far. The left-handed batsman is in ominous touch and will be looking to maximize is current run of form.

Kieron Pollard, the big West Indian has found his touch and is at his destructive best. He has already smoked 10 sixes in the tournament so far and with smaller boundaries in Sharjah, you can expect some more.

Hardik Pandya, the Indian all-rounder looked in great touch in the previous game. If he gets an opportunity to bat, we can see some real carnage at Sharjah.

Jonny Bairstow, after having a good start to the season, hasn’t capitalized on his form. He will be looking to make the most of the short boundaries here in Sharjah.

David Warner would be itching to get a big score after failing to convert his starts in the last two games. He is getting closer to his form with each innings and Sharjah might just help his cause.

Kane Williamson looked good in both the games. He was unlucky to have been run-out in the last game but he is surely a safe pick for your fantasy team.

Rashid Khan is one of the most economical bowlers in the season so far. Although he has only picked up 4 wickets he has kept the batsmen quiet in the middle overs.