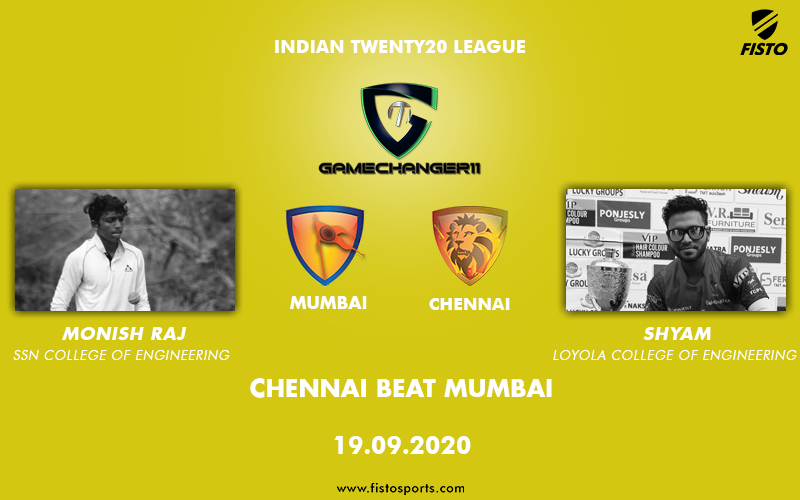 It's a first win in five for the Chennai side.

Chennai Super Kings get off to the best possible start in their Indian Premier League campaign as they beat defending champions Mumbai Indians by five wickets in the season opener.

CSK had lost their last five matches against Mumbai Indians (four in 2019, one in 2018) but started off the 2020 campaign with a win against defending champions as Faf du Plessis and Ambati Rayudu hit half centuries while Sam Curran played a crucial cameo.

Chennai Super Kings beat Mumbai Indians by five wickets at the first match of IPL 13. Faf du Plessis 58* (44b, 4sx6) and Rayudu 71 (48b, 4s x 6, 6s x 3) had played a fantastic knock before riding their team to an empathic victory against their arch-rivals Mumbai Indians. Initially, it seemed to be a cakewalk for CSK as they restricted MI for just 162, but losing a couple of early wickets made the match quite interesting.

Ambati Rayudu’s blitzkrieg knock of 71 under tough conditions was the highlight of this match. Rayudu 71 (48b, 4s x 6, 6s x 3) amassed runs at an impressive strike rate of 148, and he was well set for his second scoring his second IPL before getting dismissed. Also, Sam Curran’s 6-ball 18-run knock with a couple of big sixes was the need of the hour that brought CSK to the doorstep of breaking MI’s 5-0 winning streak against them.

Winning the toss, MS Dhoni opted to bowl first. CSK skipper’s idea was to restrict MI within 140 while taking advantage of the early seam movements. Both Curran and Deepak Chahar started off aggressively with their left-arm and right-arm seam movements and swings.

But, MI’s dependable combo of Quinton De Cock and Rohit Sharma had a different strategy from the very start. Rohit Sharma got off to mark in style hitting a splendid cover drive outside the off stump off Chahar. But he couldn’t prolong his innings and got out for 12 when Sam Curran took an easy catch off Chawla.

Mumbai Indians lost their first wicket at 46 (4.4 overs). De Cock 33 (20b, 4sx5) was in sublime form. Unfortunately, he too went back to the pavillion just within three deliveries after Rohit Sharma’s dismissal.

Saurabh Tiwary, the next man, showed good temperament with the bat and remained the top scorer for his team. Saurabh Tiwary 42 (31b, 4s x 3, 6s x 1) played a fine knock but got out in the 15th over, when Faf Du Plessis grabbed a magnificent catch at the boundary rope. After his dismissal, Mumbai Indians never looked settled. At the end of 20th over, Mumbai Indians set a target of 162 to win for CSK.

Monish Raj of SSN College, Chennai, predicted that Mumbai Indian’s victory at this match. He also stated that Mumbai Indians’ fiery batting line-up can be a real game-changer. However, MI set a very nominal total on the scorecard, and apart from Saurabh Tiwary and De Cock, all other batsmen failed to score big for the side. Pandya brothers were also expected to perform well with the bat, but unfortunately, both of them failed.

Monish Raj felt that CSK would be missing the service of its star players including Harbhajan Singh and Suresh Raina. However, Lungi Ngidi’s fast bowling came as a respite for CSK, as the Proteas cricketer perfectly dismantled Mumbai Indian’s backbone with three crucial wickets in quick succession. CSK’s bowling was disciplined.

Though Ngidi leaked a lot of runs, but dismissing the dangerous Pandya brothers within seven balls did the trick for CSK, and they successfully stopped MI at just 162-9 after 20 overs.

CSK lost their first wicket at the very first over when Kiwi pacer Trent Boult trapped Shane Watson LBW for 4 (5b, 4s x 1). This is what Mumbai Indians needed. As Monish Raj pointed out that two-three early wickets will make the task more difficult for CSK.

Soon, James Pattinson dismissed Murali Vijay LBW for just 1 in the very next over. And CSK were in deep trouble with 6 runs on the board at the loss of two wickets after the first two overs.

Not to forget a patient and well-matured knock of Faf du Plessis. Ambati Rayudu was focusing on boundaries and sixes, but du Plessis dealt in singles and doubles to keep rotating the strike without losing any more wickets.

Shyam GK, Loyola-ICAM College of Engineering and Technology (LICET), Chennai, clearly stated that CSK needed to save its wickets during the opening powerplay. They lost as many as 30 wickets in IPL 12, and once again, at this match too, CSK lost a few quick early wickets before Faf du Plessis and Ambati Rayudu took control of CSK’s innings.

They kept on rotating the strike and hitting occasional boundaries and sixes. Their strategy was to play cautiously, and not lose wickets. Had any one of them got out early, MI could have easily outwitted the Men-in-yellow.

He also added if CSK restricted Mumbai Indians to 130-140, they would have won the match very easily.

MI’s 12-20 extra runs on the board made things a bit difficult for CSK, but Sam Curran’s couple of big sixes down the batting order turned the game fully in CSK’s favor. Each run matters a lot in T-20 matches!

CSK Win It In Style

All is well that ends well. CSK fans kept their finger crossed until the last over when just 5 runs needed in the last over. 162 isn’t a fearsome total, but some breakthroughs in the crucial moments made the match quite exciting.

Faf and Rayudu negotiated Boult and Pattinson quite well that helped then men-in-yellow record their first win against MI in 6 matches.

Faf du Plessis hit a couple of boundaries in two consecutive balls and sealed the fate of CSK with a famous win. The only disappointment for CSK is Rayudu couldn’t score his well-deserved second IPL ton at this match. He fell short of 29-odd runs! His last IPL 100 came against SRH at PUNE in IPL 11.

How do you think CSK will fare this season?