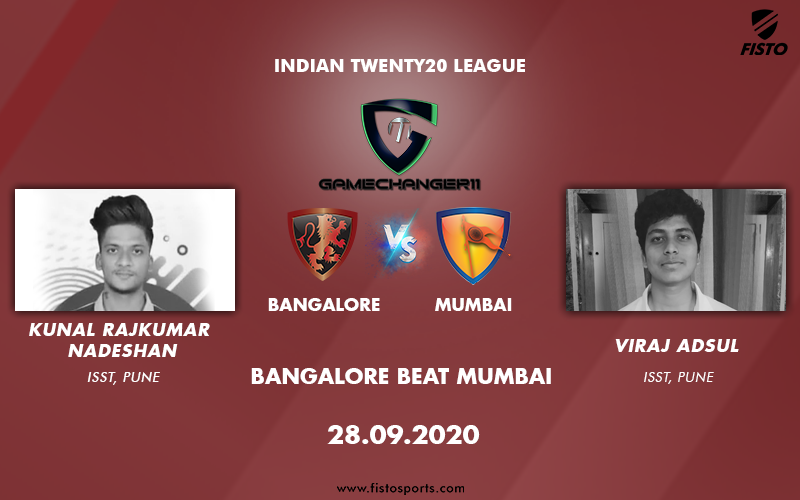 The Indian Premier League produced another jaw-dropping game of cricket on Monday night, as Royal Challengers Bangalore edged past Mumbai Indians in the super over thriller.

They did it the hard way but RCB eventually delivered clinical composure to down MI in the Super Over of their Indian Premier League match at the Dubai International Cricket Stadium.

There were so many twists and turns it is hard to know where to begin.

At one stage, Mumbai were languishing at 78/4 at the 12th over, but Pollard and Kishan helped the side made a dramatic comeback into the game. Both of them played outstandingly well under pressure and deserved full credit for that.

Earlier, Mumbai Indians opted to field first after winning the toss, but they had little idea about what was going to unfold before their eyes. RCB took MI bowlers for a ride before putting a huge total of 201/3 run on the scoreboard taking full advantage of MI’s lacklustre bowling.

RCB had an unwanted record at IPL history of not winning any two consecutive matches since 2014. They looked set to break that jinx against Mumbai Indians. Devdutt Padikkal and Finch gave a flying start RCB.

Finch 52 (35b, 4s x 7, 6s x 1) was looking extremely dangerous with his frequent strokeplay and big shots. He compelled MI to bring Krunal Pandya and Bumrah after five overs. The gamble paid off as Pandya and Bumrah gave 6-6 runs each in their first overs giving some resistance to RCB’s free flow scoring.

Finch completed his well-deserved fifty with a sweep shot off Chahar. However, in the very next over, Kiwi bowler, Trent Boult, removed the Aussie opener when he tried a lofted shot against him, but ended up into the safe grab of Pollard at long-off.

RCB lost their first wicket at 81-1 after 9 overs. Virat Kohli looked shaky from his first ball. He scored just 3 off 11 balls before Chahar struck and got him caught out at Rohit Sharma’s hand. This was RCB captain’s third straight failure with the bat at IPL 2020.

Once Ab de Villiers came in, RCB’s batting scenario completely changed. He not only played attacking cricket but also added the crucial 62-run partnership with the youngster Devdutt Padikkal for the third wicket, which literally took the game away from MI.

Both Padikkal and De Villiers went on rampage hitting boundaries and sixes at ease. Padikkal was highly impressive in his 40-ball 54-run knock including 5 fours and 2 sixes. He got his fifty in style with a cut short off Pollard.

It was Padikkal’s second half-century in the last three matches, which clearly indicates his sublime form with the bat. De Villiers pat his head as a mark of respect and appreciation for the left-hander’s outstanding batting over the last few innings.

Viraj Adsul remarked that Bumrah was quite expensive with the ball tonight. Bumrah’s good form with the ball is important to MI’s victory. A target of 201 runs won’t be easy. It was MI’s mistake that they gave away too many runs to RCB in the 1st innings.

De Villiers 55* (24b, 4s x 4, 6s x 4) played a vital knock for his side. Cricket fans were waiting for such an innings from the legend. The Protean batsman was unstoppable. He hit sixes and boundaries at ease at a strike rate of 229.

Mumbai Indians made a very bad start as they lost their first wicket in the form of skipper Rohit Sharma for just 8. He looked in good touch as he hit a six off Udana in the third ball of Mumbai’s innings. Soon, Surya Kumar Yadav also departed for a duck.

The new pair of Quinton De Kock and Ishan Kishan was at the helm. But, Mumbai’s woes continued as De Kock 14 was also caught by Negi off Chahar. Now, Mumbai were in deep trouble with 39 runs on board at the loss of 3 wickets.

Ishan and Pollard ramp up pressure

We chatted with Kunal Rajkumar Nadeshan, an emerging cricketer, Institute of Sports Science & Technology, Pune, about the  match. He said RCB looked much more comfortable on the field today. All their bowlers bowled well today with Washington Sundar deserves a special mention as he gave just 12 runs in his 4 overs at 3-RPO and a prized wicket of Rohit Sharma.

Gradually, Ishan Kishan and Hardik Pandya tried to rotate the strike. But Pandya (15) made a blunder when he tried to hit Zampa over deep mid-wicket but Negi safely caught him out. Virat Kohli and Co. were extremely happy once Pandya was dismissed. They knew the value of this wicket. Now, Mumbai were in deep trouble with 98 runs on the scoreboard at the loss of 4 wickets.

However, the silver lining of MI’s innings was Ishan Kishan and Kieron Pollard. At the end of 15 overs, Mumbai Indians still needed 90 runs in 5 overs at an asking rate of 18-RPO. But, Pollard and Kishan started hitting sixes and fours to help MI inch closer to a famous win. Initially, they dealt with singles and doubles, but when the asking rate climbed up they went on a six-hitting spree.

Will we see a new champion rise to the occasion in IPL 2020 and lift the trophy?