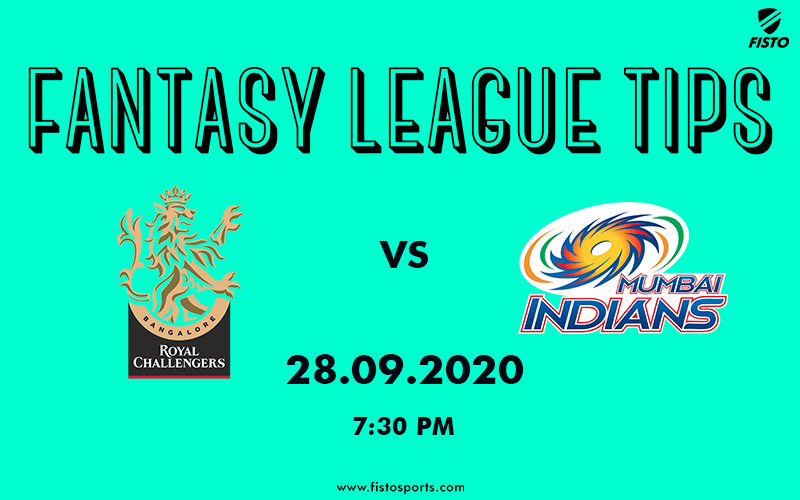 As another week of cricket looms, there's plenty to ponder for fantasy league managers up and down the land following the first two rounds of IPL 2020 fixtures.

Match 10 of the Indian Premier League (IPL) will be played between Royal Challengers Bangalore and Mumbai Indians at the Dubai International Cricket Stadium in Dubai.

The Royal Challengers Bangalore will take on the four-time Champions, Mumbai Indians. The defending champions will be high on confidence coming into this game after beating KKR by 49 runs. Royal Challengers, on the other hand, faced an embarrassing 97-run defeat at the hands of Kings XI Punjab. They will have a few concerns regarding team combination as they come into this all-important game.

While RCB sort their team combination woes, we are here with our fantasy tips to help you make your winning team.

It’s week 2 of the IPL and if you are still wondering which will be a suitable platform among many to play fantasy cricket this IPL season?  Don’t worry, we have it covered for you. Download GameChanger11 and explore fantasy cricket like never before.

The pitch at the Dubai International Cricket Stadium has been good for batting. The average score in the four matches that has been played here so far is 175.

It’s strange that captains, after winning the toss, decide to chase when the records suggest otherwise. In the four matches, teams batting second have lost all four games.

Virat Kohli, having failed twice in a row, would be itching to get some runs under his belt. His form would be crucial for RCB’s chances this year. We can expect a solid comeback from India’s best batsman.

AB de Villiers is in great touch. He looked good in the last game as well before pressure got the best of him. With Kohli not firing so far, the onus of scoring runs is on him in the middle overs.

Aaron Finch has been in form and he showed glimpses of it in the two games but he hasn’t really capitalized on the starts he has gotten. If he gets going, we can expect some real power hitting display from him.

Yuzi Chahal has been the best RCB bowler by far. He has picked up 4 wickets in the tournament so far at an economy of under 6 runs per over. He will be the key man to provide RCB with breakthroughs when the going gets tough.

Rohit Sharma, the hitman was doing what he does best, hitting sixes all around the park. He scored 80 runs of 54 balls clobbering 6 sixes in the process. He is going to be my captain for this game.

Hardik Pandya was going great before he got himself out hit-wicket. Pandya has been in great hitting form and if he gets an opportunity, he can really destroy any bowling line-up.

Suryakumar Yadav has been a consistent performer over the years. He scored a valuable 47 in the last game. He could be a good bet for vice-captain.

Jasprit Bumrah, after missing out in the first game, found his rhythm. He bowled exceptionally well and picked up two wickets before Pat Cummins decided to ruin his figures.