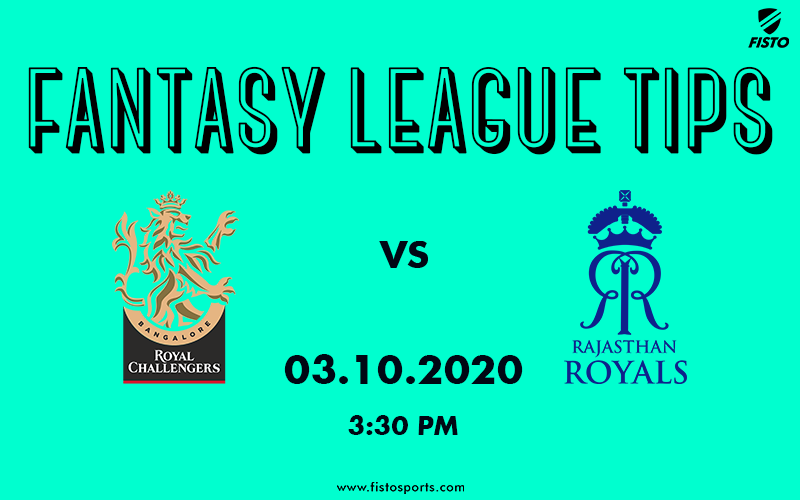 Here's everything you need to whip your team into shape ahead of RCB vs RR of IPL Fantasy League.

Match 15 is a double-header! So, without further ado, let’s get into it, so here’s our preview, star players and predictions as RR look like their struggling, but…

Match 15 of the Indian Premier League (IPL) will be played between Royal Challengers Bangalore and Rajasthan Royals at the Sheikh Zayed Stadium, Abu Dhabi.

It’s the Battle of the Royals in the first match of this season’s first double header. Rajasthan Royals will take on the Royal Challengers Bangalore in the first day game of the season. Rajasthan Royals’ dream run was cut short by the Kolkata Knight Riders in the previous game. They were beaten in all departments and will be looking to resurrect their mojo.

Royal Challengers Bangalore, on the other hand, showed glimpses of their previous selves while defending a mammoth total against Mumbai Indians. Although they walked away with two points, winning the super over, their death bowling remains a concern.

We are back with our fantasy tips to help you make right choices for your fantasy teams for this Royal battle.

Week 2 of the IPL 2020 is coming to an end and if you are still wondering which will be a suitable platform among many to play fantasy cricket this IPL season?  Don’t worry, we have it covered for you. Download GameChanger11 and explore fantasy cricket like never before.

Preview: Preview: RR and RCB square off in battle of heavy hitters

The track at Abu Dhabi has been well maintained. It looked a bit slow initially but we have seen some high scoring games as well. The average first innings score at this venue is 170 this season.

Teams batting first have won 3 games and teams batting second have won 2 out of the total 5 matches played here this season so far.

Devdutt Padikkal, the youngster from Karnataka is letting his bat do all the talking. He has amassed 111 runs from three innings including 2 fifties.

AB de Villiers is doing what he does best, smoking bowlers out of the park. He has mustered 134 runs with 2 half centuries at a strike rate of 186.11 in 3 innings.

Aaron Finch, after missing out on the two occasions, converted his start into a fifty. He was at his destructive best and will look to carry his form in the next game.

Yuzi Chahal has been bowling brilliantly and remains the best RCB bowler in this season. He has picked up 5 wickets in the tournament so far. He will certainly to give you points.

Steve Smith has been in great form. He has scored 122 runs at a strike rate of over 150. After missing out in the previous game, he would want to take some responsibility at the top of the batting order.

Jofra Archer added another six to take his tally to 7 sixes in the 15 balls he has faces so far in this IPL. He also returned with figures of 2 for 18 in the last game.

Sanju Samson, the wicket-keeper from Kerala is in ominous touch. Although he missed out in the previous game, he will want to spend some time at the crease before going bonkers as the pitch here is not as good as it is in Sharjah.

Jos Buttler looked good in this short stay at the crease against KKR. He will be looking to convert his start and get a big score for his team.