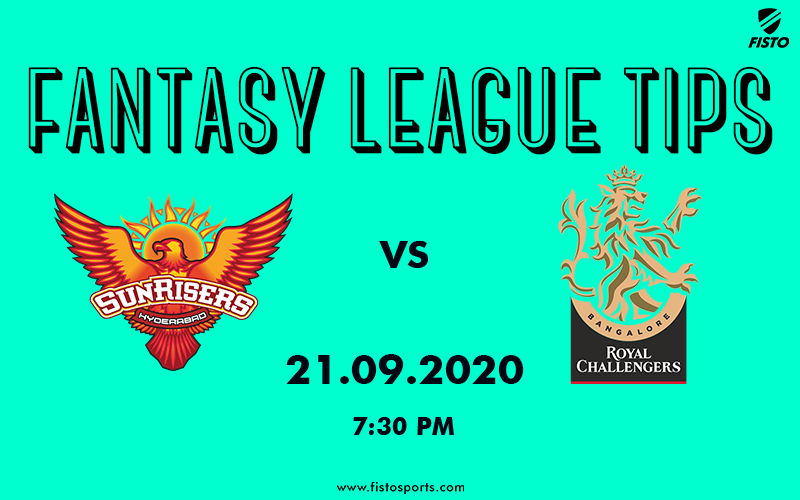 Wait – Don’t play that wildcard just yet! Here’s some quick tips to tweak the squad in time for RCB v SRH.

The 3rd match of the Indian Premier League (IPL) 2020 will be played between the Sunrisers Hyderabad and Royal Challengers Bangalore at the Dubai International Cricket Stadium in Dubai.

In what should be an entertaining clash, Royal Challengers Bangalore (RCB) face off Sunrisers Hyderabad (SRH) on Monday as the two kick off their IPL 2020 campaigns, with both sharing ambitions of finishing high this season.

Also Read: SRH vs RCB Preview – Both sides look to start with a bang in eye-catching encounter

The first weeks of the season are crucial as you look to get off to a fast start.

Here are our tips in order to help make those difficult decisions a little easier!

Before we start, for those of you who are thinking about playing this year, why not join the Gamechanger11 Fantasy Cricket League?

There will be plenty to play for throughout the course of the Fantasy IPL season.

The average first-innings score at the venue across those 51 matches is 152.

So, the pitch is good for batsman. It is also good for pace bowler and spinners. This is what we called as neutral pitch.

Virat Kohli:  The run machine, he is the first option to pick the caption.

ABD: The player who can hit 360’. Solid batsman. There is no question about his fitness but last year wasn’t good enough like earlier seasons. He may fail in this match. Keep him as a caption in Grand league.

Aaron Finch: Excellent player in a very good form. Can be good option for caption. Either he can score big or flop completely. Can drop few teams in small league. He has played in all 8 franchises in his 10 years of IPL career.

Chahal: I am not kidding you! Even though the pitch support pace last match Ravi Bishnoi and Ashwin bowled really well for me Chahal is the only reliable bowler in RCB team past few years.

David Warner and Johnny Bairstow: These two can be good captain pick in small league. They may be rival in their own country teams but when it comes to IPL they play together very well. Good understanding partners. Can be good option to keep both of them as C and VC in the same team.

Rashid Khan, Mohammed Nabi: This spin duo can pick wickets in any sort of ground. Nabi can do the finisher role with the bat. Can expect some quick fire in the death overs. Rashid number one spin bowler in the world. Can bat but this match he won’t get chance to bat on.

Manish Pandey: A perfect middle order batsman who can switch to hitting role when needed. Can be good VC option as there are lot of Captain options available.

This is gonna be a tough one... Who do you think will win?