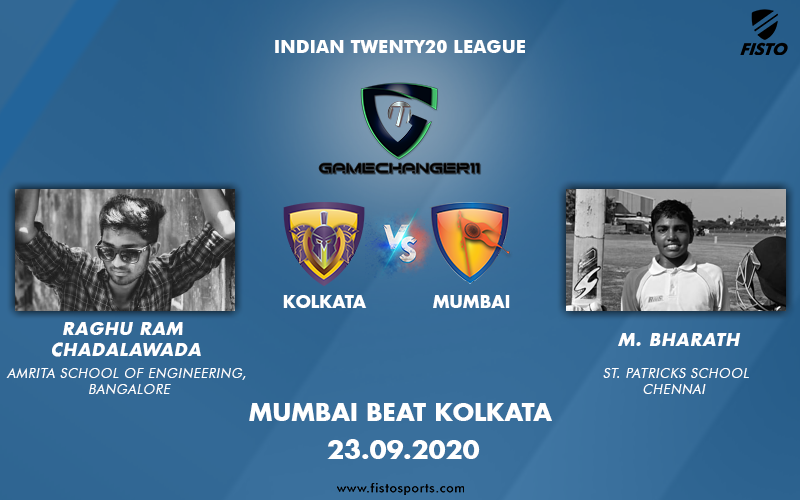 Reigning champions Mumbai Indians were in sparkling form in Abu Dhabi, thumping of Kolkata Knight Riders by 49 runs, and registering first win of the IPL 2020.

A forgettable night for Kolkata Knight Riders (KKR) as they were completely crushed by their nemesis, Mumbai Indians (MI). It seems like last years problems are resurfacing for KKR. The middle order again looked rusty in spite of its enormous talent. The over dependence on Russell, the rusty opening pair consisting a pinch-hitter Sunil Narine and the inexperience of the bowling department of KKR, except Cummins.

MI, on the other hand will be brimming with confidence after his gigantic win. They needed a win to get their campaign back on track. KKR’s bowling woes still continue and they will also be wary of Cummins’s form. Meanwhile, MI would be absolutely ecstatic as two of their main players, Rohit Sharma and Jasprit Bumrah have got back in form. It was always going to be a tough chase for KKR, and the slow start courtesy of Trent Boult and James Pattinson’s brilliance with the ball.

Pat Cummins's IPL homecoming party was crushed as he was whacked for boundaries all across the park by the MI batsmen. The burden of expectations took a toll on him. KKR broke the bank to secure the services of Pat Cummins in the auctions. Getting bought for 15.5 crores in the auction, everybody expected Cummins to deliver from ball 1. Conceding 30 runs in the first 2 overs, Cummins was low on confidence. The final nail in the coffin for him was his 19 runs over which ultimately made his spell read 0/49 in just 18 balls. However, one must really give him space as this might just be an off-day or an aberration considering the kind of expertise the man from Australia possesses. The 15.5 crore tag did weigh down his label as there were a burden of expectations surrounding his performance.

Rohit Sharma’s masterclass of an innings

.@ImRo45 now holds the record of most Man Of The Match awards by an Indian in IPL. #IPL2020 pic.twitter.com/VUyaqjpPxF

Rohit Sharma criticized all his haters who were questioning his fitness and form after the first match by scoring a superb 80 off just 54 deliveries. Opening the batting for MI, Rohit got off to a slow start but capitalized on the dismal bowling of Cummins and eventually wreaked havoc on the bowlers of KKR. The 90-run partnership between Yadav and Sharma provided a perfect platform for MI to score a big and imposing total. Even after Yadav’s wicket, runs kept flowing from Rohit’s bat and his fluent knock powered MI to a gigantic 195.

KKR captain Dinesh Karthik took a good decision when he promoted himself up the order upon the dismissal of Shubman Gill. Gill tried to pull the ball towards deep midwicket, and ended up getting caught by the fielder at short midwicket. DK who has tremendous experience under his belt would have been a better option than Nitish Rana who is still young and not as experienced as DK.

Jasprit Bumrah who had a torrid 2020 after coming back from injury, swung back into form with his exceptional bowling, mostly good lengths and pace variations. Bumrah removed the duo of Andre Russell and Eoin Morgan and maintained exceptional figures. With an economy rate of 1.7, Bumrah proved everyone that form is temporary but class is permanent.

Kolkata Knight Riders got off to a blistering start, courtesy some exceptional bowling from uncapped colts Shivam Mavi and Sandeep Warrier. Shivam Mavi brought the early breakthrough for KKR by getting rid of the danger man Quinton de Kock for just 1(3) but the class and elegance of the duo of Rohit Sharma and Suryakumar Yadav eclipsed that dream start. The ball was swinging immensely and Mavi looked really pumped up. KKR really missing Suryakumar Yadav's services. What a player he has evolved to after leaving KKR in 2018.

We had a chat with Raghu Ram Chadalawada of Amrita School of Engineering, Bangalore and he mentioned that Pat Cummins would be a good, positive influence on the other young bowlers because of his truckload of experience. He was spot-on. Once the young, uncapped Warrier got struck for a six in his first over after a brilliant display of accurate bowling, he was seen patting his back to bring in some motivation to the young bowler. He also predicted that the team winning the toss would choose bowling because of the dew factor. Yes, that prediction was absolutely right as well. Dinesh Karthik, the skipper of KKR won the toss and elected to field, keeping in mind the dew factor. It should be noted that dew makes it extremely difficult for the spinners to grip the ball and deliver their deliveries. As stated by Aaron Finch of Royal Challengers Bangalore (RCB), the ball eventually becomes a "cake of soap".

We had a conversation with M Bharath of St. Patrick's School and Young Cricket Academy and he opined that both Rohit Sharma and de Kock were rusty in the previous match. While the analysis is true for De Kock, Rohit Sharma didn't look rusty at all today. He was exceptional with the bat and notched up a brilliant 80. He also opined that MI's middle order is as good as KKR. The middle order of MI performed decently against the bowling of KKR.

Yes, it was a tough game for KKR, but one must also not forget that Eoin Morgan and Pat Cummins finished their quarantine yesterday evening and it is absolutely not easy to get accustomed to the hot UAE conditions in less than a day. KKR next face off against SRH on the 26th while MI square off against RCB on the 28, September.

RoHIT Sharma and aspreet Bumrah back in form?