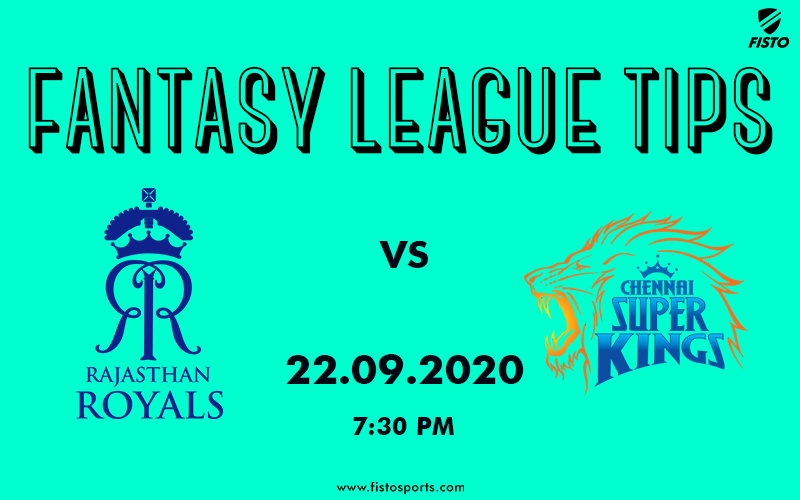 It’s crucial to get off to a fast start in the IPL Fantasy League 2020 season. Picking these players could help you do exactly that!

.@rajasthanroyals skipper @stevesmith49 has recovered from his concussion and is set to lead #RR in their opening game against #CSK on Tuesday. #RRvCSK #IPL2020 https://t.co/KAZI7YIUsf

The fourth match of the Indian Premier League (IPL) 2020 will be played between Rajasthan Royals and Chennai Super Kings at the Sharjah Cricket Stadium in Sharjah.

Rajasthan Royals will be starting their campaign against a balanced Chennai side who already have a win under their belt. The Royals have some concerns regarding the unavailability of some of their players. Can they find the right combination under challenging circumstances to beat Dhoni’s men and start the season on a high?

While that answer is yet to be known, we are here to help you make the right choices for your fantasy teams.

Before we start, for those of you still wondering which will be a suitable platform among many to play fantasy cricket this IPL season?  Don’t worry, we have it covered for you. Download Gamechanger11 and explore fantasy cricket like never before.

Sharjah has a different track than Dubai and Abu Dhabi. Unlike the two venues, the ball comes on to the bat nicely in Sharjah. We can expect some a high scoring match tomorrow.

The average first innings score is 150 in the 14 T20Is played at this venue. Teams batting first have won 9 games while teams chasing have only won 4 games while one match was tied.

The highest total at Sharjah is 215/6 by Afghanistan.

Steve Smith has cleared his concussion test and is ready to kick start this IPL with a bang. In the absence of Ben Stokes, he has a major role to play for the Rajasthan Royals.

Shreyas Gopal has been very impressive with his wrist spin in the last two seasons. He has picked up 33 wickets in 25 matches at an economy of 7.37 during this period.

Sanju Samson, the wicket-keeper from Kerala has been scoring runs consistently in the IPL. He has scored more than 300 runs in each of the last three seasons including 2 centuries and an unbeaten 92.

Robin Uthappa did not have the best of IPLs last year but a player of his caliber can turn things around. He will back at his favorite batting position, opening the batting with the U19 sensation Yashasvi Jaiswal.

Faf du Plessis scored an unbeaten 58 in the opening game against MI, anchoring the innings beautifully. He can be a safe vice-captain option for any fantasy team.

Ambati Rayudu is on a mission to prove his non selection in the CWC 2019 wrong and so far, he has been successful. He scored a brilliant fifty in the last game and will be looking to continue his merry way round.

Shane Watson is very destructive at the top. He has shown time and again why he is rated so high in world cricket still at the age of 39. He can give you points as he bowls as well.

MS Dhoni can be the captain of any cricket team in the world, let alone be your fantasy team.

Can CSK put together consecutive wins and defeat Rajasthan Royals when they square off on Tuesday night?