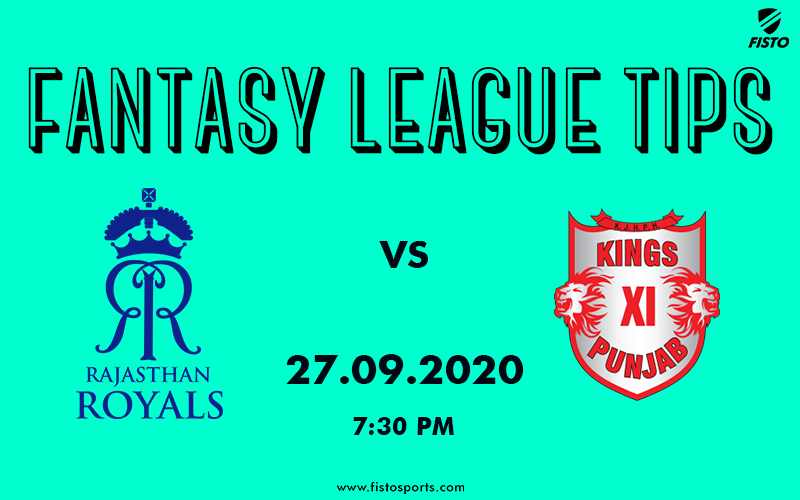 Match 9 of the Indian Premier League (IPL) will be played between Rajasthan Royals and Kings XI Punjab at the Sharjah Cricket Stadium in Sharjah.

In what should be an interesting encounter, Rajasthan Royals lock horns with Kings XI Punjab to fight for a potential top spot on the points table. Both the teams scored in excess of 200 runs in their last game and are coming off from a win. It is expected to be a run feast here at Sharjah as the two teams have some hard-hitting batsmen in their ranks.

We are here with our fantasy tips to help you maximize your chances of winning in this exciting clash.

Before we start, for those of you still wondering which will be a suitable platform among many to play fantasy cricket this IPL season?  Don’t worry, we have it covered for you. Download GameChanger11 and explore fantasy cricket like never before. (Create a hyperlink for GameChanger11 while posting)

The average first innings score at Sharjah is 150 in the 14 T20Is played at this venue. Teams batting first have won 9 games while teams chasing have only won 4 games while one match was tied.

More than 400 runs were scored in the previous game here between RR and CSK. We can hope for another run feast as both the teams are in great form.

Steve Smith has found form in the first match of the season and it is a great news for Rajasthan. He opened the batting for RR and scored a fine 69 off 47 balls.

Jofra Archer, we all know, is lethal with his bowling but he also showed how destructive he can be with his batting. He hit 4 consecutive sixes in the final over against CSK which proved vital at the end of the match.

Sanju Samson, the wicket-keeper from Kerala was in a destructive mood against Chennai. He scored 74 off just 32 balls hammering 9 towering sixes.

Jos Buttler will return to the RR side after completing his quarantine period. He had a good series against the Aussies and given that the track at Sharjah is a batting paradise, expect some big hits from him up the order.

KL Rahul fighting his inner demons, surely proved that form is temporary but class is permanent by scoring a scintillating hundred. Aided by his former IPL Captain, Rahul struck 14 fours and 7 sixes to help his side cross the 200-run mark.

Mayank Agarwal, the Karnataka batsman has scored 115 runs at an average of 57.50 in 2 innings. He is in good nick and could be a valuable pick.

Mohammad Shami is in great form with the ball. He has picked up 4 wickets at an impressive economy rate of just 4.36 in two games. He could be a good choice for the vice-captain.

Ravi Bishnoi, the U19 leggie, has been impressive in his two outings. Under the guidance of former India Captain and Coach, Anil Kumble, he could well be the find of the tournament. Look out for this young lad.

Will Rajastan Royal make it 2 in a row?