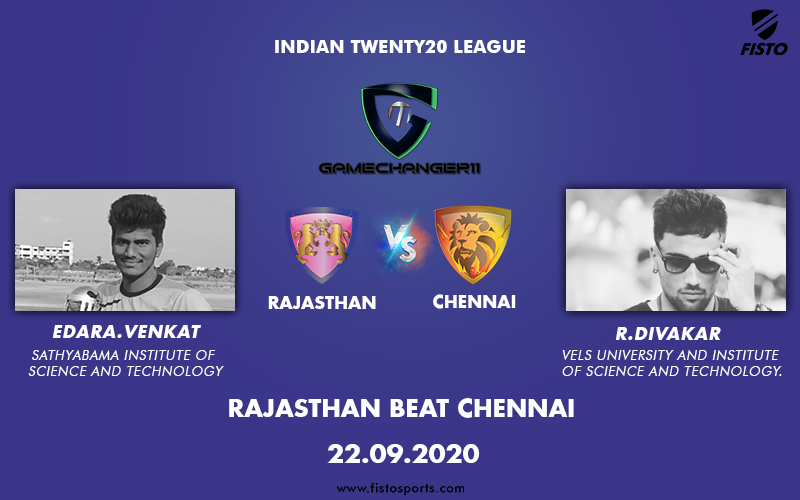 Sanju Samson and Steve Smith put on an impressive display as Rajasthan Royals cruised to a 16 runs victory against Chennai Super Kings, as they picked up first win of the IPL 2020 season.

Rajasthan Royals started their IPL campaign with a convincing win against the mighty Chennai Super Kings by 16 runs at Sharjah. CSK batsmen were never into the game barring Faf du Plessis’s solitary battle against Rajasthan Royals with a 37-ball 72-run knock with seven sixes and one four.

Dhoni 29* (17b, 6s x 3) came quite late in the innings when CSK almost lost the match. In hindsight, it feels now that if MS Dhoni had come out to bat at number 4 or 5, then CSK might have pulled off a stunner. Overall, it was a good contest for both teams with 32 sixes and 18 hits to the fence.

Earlier, Dhoni once again opted to field first after winning the toss. But, his decision didn’t pay off as Royals came out heavily with the bat against them. At the end of 20 overs, they set a target of 216 runs for CSK. Dhoni-led CSK didn’t expect this sort of batting carnage from Rajasthan Royals.

Edara Venkat of SATHYABAMA INSTITUTE OF SCIENCE AND TECHNOLOGY stated that RR have a strong batting line up with plenty of batsmen who can accelerate the innings of the match at any time. Batting first, Royals went into a beast mode. Though they lost opener Yashasvi Jaiswal for just 6, but never looked back since then. Royals’ Captain Steven Smith and Sanju Samson accelerated the innings in their own hard-hitting style with boundaries and sixes.

Steven Smith 69 (47b, 4s x 4, 6s x 4) was fabulous with the bat alongside Sanju Samson. The attacking right-handed duo hit half-centuries while dominating CSK’s spin bowling by hitting maximum sixes against Jadeja and Chawla. Their bowling spells leaked over 10-RPO.

There were a couple of big disappointments as well apart from its opener Yashasvi’s early dismissal. Both Miller (0) and Uthappa (5) were dismissed early after Samson’s fireworks. They got the stage to show their batting prowess, but failed.

As Edara pointed out early that Royals’ strength rests with its youngsters. The team has a good combination of young blood and experience. Its star-studded batting and bowling lineup have players who are meticulous in their respective departments. That’s the primary reason that helped RR beat CSK too easily in their very first match.

CSK, a three-time IPL winner, was expecting something around 160-170 to chase on batting second. But, Dhoni’s idea backfired as Rajasthan Royals were never seemed to be facing any challenges from CSK bowlers. Apart from D. Chahar and Sam Curran, CSK’s bowling was totally lackluster.

Chennai bowlers looked fully helpless in front of RR. Dhoni’s bowling and fielding strategies had failed one after another once Smith and Samson took hold of the match.

We discussed with R. Divakar, an emerging cricketer of University and Institute of Science and Technology about Royals batting.

Divakar exclaimed that CSK’s main strength lies in its opening slot. But once again, its openers failed after a good start. CSK scored 53/0 after 6 overs with Murali Vijay 19* and Shane Watson 32* (19b, 4s x 1, 6s x 4) were at the crease. CSK still needed 164 runs to win from 84 deliveries, the match was poised for a spectacular fight altogether.

Initially, it seemed that Dhoni and Co. would leave no stone unturned to repeat another heroic performance here at Sharjah. Watson and Vijay gave a good start while adding the crucial 56 runs for the first wicket.

But, Watson who had hit four maximum, got out when Tewatia’s ball straightaway hit his stump at the seventh over.

Soon, Murali Vijay’s run-a-ball knock of 21 also came to an end when Shreyas Gopal caught him out at the hands of Curran. Murali Vijay never looked at ease against the RR’s pace attack. Even though CSK were chasing a huge total, he was playing quite slow. A batsman of Murali Vijay’s caliber was expected to play faster so as to take the pressure off from CSK’s head.

Then a couple of consecutive stumpings by Samson off Rahul Tewatia in the 9th over successfully removed the dangerous Sam Curran 17 (4s x 1, 6s x 2) and Ruturaj Gaikwad (0) to buildup more pressure on CSK.

With 77 runs on the scorecard at the loss of 4 wickets, CSK’s probability of winning the match was slowly slipping out of their hands. And, the dismissal of Kedhar Jadhav (22) literally shattered all hopes for fans. However, du Plessis and Dhoni’s presence on the ground still kept them glued to their TV sets.

The veteran batsmen were expected to produce spectacular knocks without losing any further wickets. And, they did play some good shots towards the end of the CSK innings, but it was already too late.

CSK’s chance of winning the match was literally over when they needed 86 runs to win from the last 30 balls at 17-RPO.

It was one of those rare occasions when the yellow brigade completely gave in to their opponent. Dhoni will definitely try to come back hard in their next outing. But, for the victorious Rajasthan Royals, it’s a dream start to their IPL 2020 campaign!