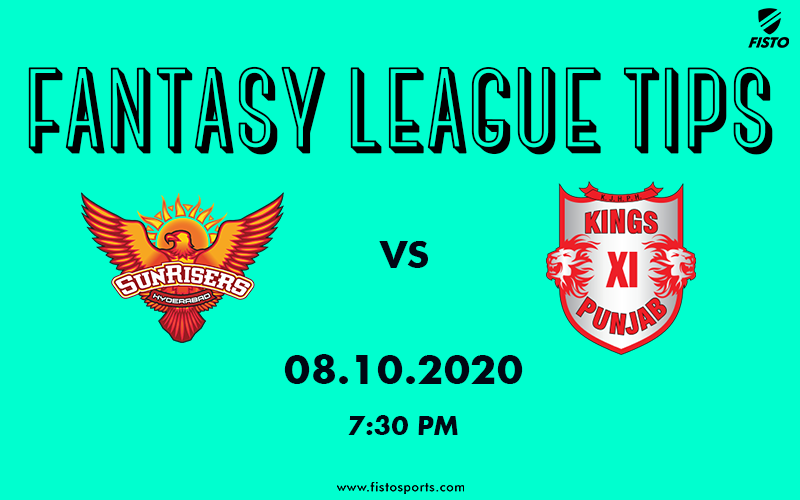 Don't let your boredom get the better of you and read on to find out everything you need to whip your team into shape ahead of SRH vs KXIP.

The 22nd match of the Indian Premier League (IPL) will be played between Sunrisers Hyderabad and Kings XI Punjab at the Dubai International Stadium Dubai.

Kings XI Punjab will take on Sunrisers Hyderabad in this exciting battle. Hyderabad, after having a slow start won two consecutive games while Punjab have only managed to win one. The two teams are coming from a loss and would be desperate to turn things around as quickly as possible.

Both, Punjab and Hyderabad face a similar problem heading into this game: Bowling. While Punjab was already struggling with the ball, Hyderabad suffered a major blow with the injury of Bhuvneshwar Kumar. It will be interesting to see what bowling combination these two teams come up with for this match.

This will be the 10th match in Dubai for this season and in the previous 9 matches the average first innings score so far is 179. Teams batting first have won 6 times while teams chasing have only managed to get past a total once. Two games have been tied.

Jonny Bairstow, after having a good start to the season, hasn’t capitalized on his form and the starts he has gotten. He will be looking to score a big one today against a weak bowling line-up.

David Warner had a slow start to the season and finally scored a fifty in the last game. Now that he is back in form, expect some fireworks from him at thr top of the order.

Kane Williamson, looked good but hasn’t yet converted any of his starts so far. He will play a vital role in the SRH middle order.

Rashid Khan returned with figures of 1 for just 22 runs in his 4 overs in Sharjah where every other bowler was taken to the cleaners. He is one of the most economical bowlers in the season so far.

KL Rahul, the Punjab captain is the leading run scorer with 302 runs at an average of 75.50 in 5 innings. His strike rate dipped in the last 2 games because of too much pressure of scoring runs at the top. He would want to play with freedom and that’s where he can be dangerous.

Mayank Agarwal, the Karnataka batsman, has been in tremendous form and as complimented his captain at the top. He has amassed 272 runs at a strike rate of 162.87 in 5 innings.

Nicholas Pooran has found his groove and has chipped in with cameos every now and then. He is yet to play a big innings which is needed in the middle order for Punjab. He would want to give that stability to his side.

Mohammad Shami had an off day in the last game but he has had a good IPL so far picking up 8 wickets in 5 matches.

Who will emerge victorious in the battle of equal?