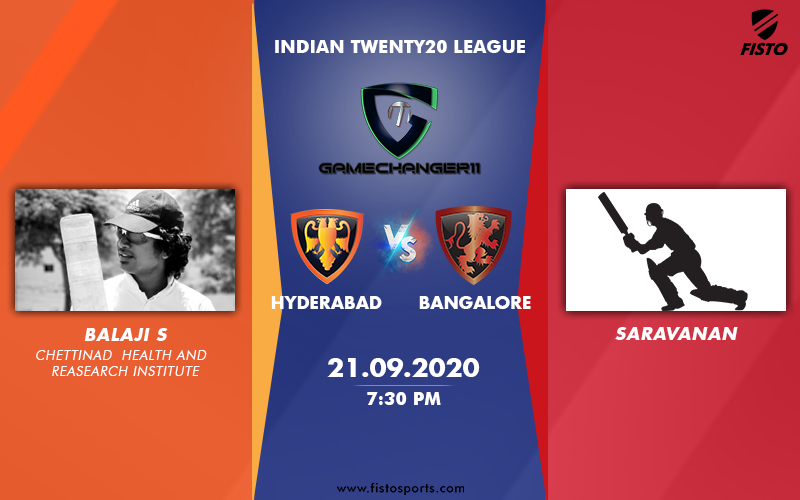 IPL 2020: Sunrisers Hyderabad vs Royal Challengers Bangalore Preview – Both sides look to start with a bang in eye-catching encounter

In what should be an entertaining clash, Royal Challengers Bangalore (RCB) face off Sunrisers Hyderabad (SRH) on Monday as the two kick off their IPL 2020 campaigns, with both sharing ambitions of finishing high this season.

Cast your mind back to the finals of the 2016 edition of the glamorous Indian Premier League (IPL). Sunrisers Hyderabad (SRH) locked horns against the Royal Challengers Bangalore (RCB) in a cracker of a final. Undoubtedly that was one of the most high-octane encounters between the two sides, which resulted in euphoria for the SRH and absolutely agony for the men in red. But since that final, RCB have mostly warmed themselves in the bottom half of the table while SRH have been extremely consistent.

This year's IPL will be different. After cricket was brought to a screeching halt by the deadly Covid:19 virus, the organisers and stakeholders have figured out a way to organise something, which is arguably the greatest carnival on earth, the IPL. Fans are extremely elated for IPL to begin and so are the two teams which love facing against each other.

The Sunrisers Hyderabad have a pretty decent and balanced side with an extremely strong and belligerent batting line-up. Their primary strength has been the fiery opening duo of David Warner and Johnny Bairstow along with the charismatic Kane Williamson who usually comes in at number 3. They also have some experience in the middle order in the ranks of Manish Pandey, Wriddhiman Saha and Indian seam bowling all-rounder, Vijay Shankar.

There is a slight loophole in this very middle order. Due to the over-dependence on the openers, the middle order was a little rusty last season, except of course Manish Pandey. The Indian middle-order maverick scored 344 runs at a staggering average of 43.00. The rest of the batsmen were average in their ranks and the onus was completely thrusted on the openers, all throughout the tournament.

We believe the conditions of UAE are going to be slow and sluggish, with an ample amount of grass on the surface. This will thus favour the spinners and the wickets will be spin-friendly on most of the occasions. SRH have Rashid Khan, Mohammed Nabi, Abhishek Sharma and Shahbaz Nadeem who would be itching to bowl on these UAE conditions.

Looking at the seam bowling options, Warner who is the skipper of this energetic and talented SRH contingent, will have a smile on his face. Bhuvneshwar Kumar shall be leading the pace attack and will be an invaluable asset for Warner. He can take full advantage of such playing conditions and can deliver off-cutters and leg-cutters at regular intervals, which are very much needed for such conditions. Warner has plenty of other options in the form of Mitchell Marsh, Khaleel Ahmed, Billy Stanlake, Basil Thampi and Sandeep Sharma.

Overall, the side looks pretty balanced and composed except for that fragile and rusty middle order. For SRH to bank on their biggest strength that is consistent performances from everyone in the squad which has made them qualify to playoffs at a regular interval, the middle order has to step up and take the load from the swashbuckling openers and Kane Williamson.

Fistosports had an exclusive conversation with Balaji S from Chettinad college and he had these opinions:

This match between SRH and RCB will be a run-fest looking at both the batting departments of the sides but for SRH to win the match they need to heavily depend on their openers who have consistently performed for them and Williamson who has led them beautifully last season. Khaleel Ahmed could prove to be deadly for Virat Kohli. Getting him out alone won’t do the job since they have got some pretty good batting in the likes of ABD Villiers, Aaron Finch and even Devdutt Padikkal might play in place of Parthiv Patel and maybe ABD Villiers might don the role of a wicketkeeper. In the presence of all-rounders like Rashid Khan and Vijay Shankar, SRH might prove to be a threat for RCB.

Led by one of the influential and talented cricketers around the world and arguably the greatest batsman to ever don the sport, RCB have a point to prove to everyone. Failing to win the trophy even once in all these 12 editions, RCB mostly have languished at the bottom of the table after their fairy-tale 2016 sojourn. With a new team management and some fiery additions to their squad, Virat Kohli and company might just target the elusive trophy with a lot more confidence and clarity compared to the other seasons.

Their batting line-up needs no introduction at all. With the likes of Aaron Finch, Virat Kohli and ABD Villiers forming the core of their batting line-up, the team is assured to go all guns blazing in most of the matches. Mike Hesson, the director of cricket operations of RCB has also dropped a giant hint that ABD might keep wickets which will give Virat the liberty to play an extra batsman like Devdutt Padikkal who has been in hot-blistering form in domestic cricket. In the 2019 edition of the Syed Mushtaq Ali Trophy, Padikkal amassed 580 runs at a mind-boggling average of 64.44. This speaks volumes of his ability as a batsman. RCB also have Shivam Dube, Gurkeerat Singh Mann, Chris Morris, Moeen Ali who would be vital cogs in the middle order.

Wily leg spinner Yuzvendra Chahal, off-spinners Moeen Ali and Washington Sundar would be gearing up to play in the spin-friendly UAE pitches. With larger stadiums and pitches that have a stark contrast to the batting-friendly Chinnaswamy pitches, the spinners will have a large role to play if RCB are to lift the trophy this season.

Perhaps the biggest chink in their armoury all throughout these years has been their shallow pace bowling attack. With some handy buys at the auction, RCB have more or less plugged those holes but it will be interesting to see how the combination of the experienced Dale Steyn, Umesh Yadav pair up with the young colts Navdeep Saini, Mohammed Siraj.

If the death bowling issues can be resolved and if they get off to a blistering start in the tournament, then this might well be RCB’s golden year.

Fistosports had an exclusive conversation with Saravanan and he had these opinions:

Royal Challengers Bangalore should try to take the wickets of openers David Warner and Jonny Bairstow within the first six overs. As both of them are the backbone of SRH’s batting line-up, they can use Washington Sundar in the power play as a surprise weapon to counter the threat of the experienced openers.

Virat Kohli or Ab de Villiers should take up the role of a sheet anchor, so the other batsman in RCB can express themselves freely which can power them to a high score. It is very important for one of them to play out Rashid Khan, so they can get the opportunity to showcase their potential against the other bowlers.

One of the most aggressive and swashbuckling batsmen in modern-day cricket, Warner has evolved into a run-scoring machine in every format of the game. The buccaneering batsman from Australia will be raring to go in this carnival event as he has already been the recipient of three orange caps in the past.  Named as Captain for the 2020 edition, Warner will be looking to stamp his authority this year as well.

Virat Kohli has got the Midas touch. There is no denying the above statement. Unarguably the greatest player to ever don the RCB jersey, Virat has been the backbone of RCB's batting line-up since a considerable period of time. The highest run-getter of IPL, captain Kohli will have to play a pivotal role if RCB have to qualify this season.

Be it in the IPL or in the matches between them, SRH have been the more consistent and successful team. A total of 15 matches have been played between these two sides. While SRH have won 8 of the 14, RCB have managed to win only 6 and one game in 2017 had been abandoned. Last season they faced off against each other twice, with both of them winning 1 game each.

My prediction is that, RCB will win the match.

This is gonna be a tough one... Who do you think will win?