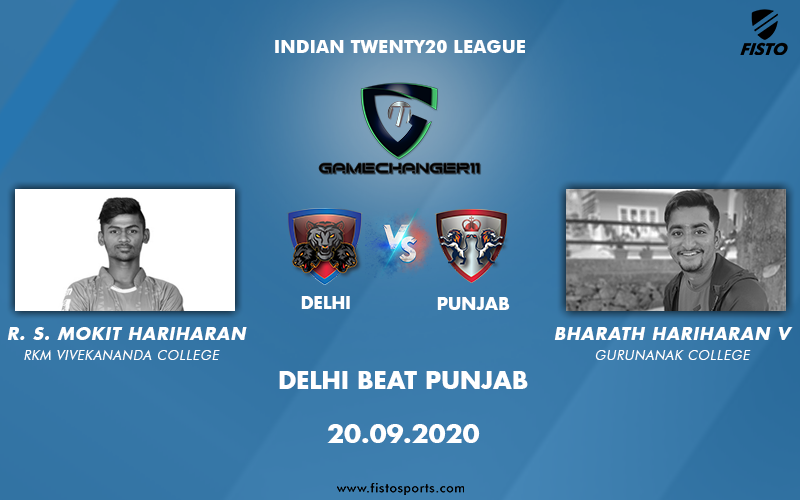 The excitement went to overdrive in the second match of the Indian Premier League 2020 as the match between Delhi Capitals and Kings XI Punjab went to a super over where Kagiso Rabada proved his mettle to deliver a win for Capitals.

An early blow for Delhi

Diving on his right, R Ashwin injured his left shoulder and left the field immediately. That would have hurt.

Both the teams started poorly during batting and looked shaky at various points of time during the match. It was primarily a match of two great innings and two great spells from the two opposition teams. For Delhi Capitals it is their overseas players Marcus Stoinis with his all-round contribution and Kagiso Rabada with his death over and Super-over bowling, who made the telling impact, whereas for Kings’ it is their Indian stars Mayank Agarwal and Mohammad Shami who made all the difference with bat and ball respectively. It was a tight match for both set of fans and with only 1 run required of last two deliveries it looked like KXIP has sealed the match. But some inspiring fielding placement from captain Shreyas Iyer ensures that Stoinis picked up two wickets in last two balls to take the match to a Super-Over and eventually Delhi got the win.

There was some controversy regarding a short run in the 19th over when a desperate attempt for a quick double was only considered as one run as the umpire called one short for Chris Jordan for not putting the bat behind the line. The replays were not conclusive, and that one run became crucial in the final analysis.

Another key talking point of the match was Ashwin’s injury while bowling. Ashwin, who had a great start against his old team to pick up 2 wickets in his first 5 deliveries, got injured while diving to get the ball. The extent of his injury is still not clear, and a medical report should give clarity regarding his participation in the upcoming matches.

Delhi Capitals faced a huge blow even before the match as their experienced Indian fast bowler Ishant Sharma was deemed unfit due to a last moment injury. They had to opted for Mohit Sharma, who although has lots of IPL experience but played only 1 match in the 2019 edition. They also had a terrible start as experienced Shikhar Dhawan was run out for a duck. Soon they were 13 for 3 as both Prithvi Shaw and Shimron Hetmyer played horrible shots to get out. Mohammad Shami was breathing fire at that point and created various problems for all the batsmen. Iyer and Rishabh Pant built a slow recovery as the pair added 73 runs in next 10 overs before Pant became the young leg spinner Ravi Bishnoi’s first IPL victim. The under-19 Indian spinner made an impressive debut to finish with 1/22 in his four overs. Shami returned immediately and got dangerous-looking Iyer for 39. He finished with 3/15, his best ever bowling spell in IPL. When Capitals lost Axar Patel on the first ball of the 17th over, it looked they will struggle to reach even 125 but that’s when Marcus Stoinis took charge. The Australian dasher was in great form and scored a brilliant 21-ball 53 with 7 fours and 3 sixes. Thanks to him, Capital added 57 runs in last 3 overs including a 30-run last over off Chris Jordan who finished with the sorry figure on 0 for 56 in his four overs.

Bharath Hariharan V from Gurunanak College, Chennai predicted a win for Delhi. He trusted the Indian-heavy batting line up of Delhi Capitals to deliver and although Iyer and Pant played a key partnership, the main push in their innings came from their overseas star Marcus Stoinis. Ashwin had a great start, but his injury would be a concern for Delhi Capitals. They would wait anxiously on his final fitness news who might miss next few matches.

Kings XI Punjab started enterprisingly as their captain KL Rahul looked in form immediately. However, a 30-run opening partnership was broken by Mohit Sharma’s inswinger in the fifth over. This started a collapse as Ravichandran Ashwin came to bowl the next over and got two wickets in his first over against his old team. Kagiso Rabada picked up Glenn Maxwell in the next over and suddenly Punjab was 35/4. Mayank Agarwal held the other end up and built small partnerships to take KXIP near victory. His 89 was the best innings of the match as he displayed his full range of shots with 7 fours and 4 sixes in the 60-ball innings. There were small cameos from Sarfaraz Khan (12) and Krishnappa Gowtham (20) but it was Mayank who took them to the brinks of victory. Ashwin’s injury looked critical for Capitals who were forced to bowl Stoinis for three overs. But like first innings, Stoinis again shone in the last over and his back-to-back wickets in last two ball took the match to a super over.

R. S. Mokit Hariharan from RKM Vivekananda college predicted a KXIP win. His prediction regarding Mayank and Shami came true, but the overseas players disappointed. Maxwell scored just one run and Jordan had a horrible match whereas Mujeeb ur Rahman and Chris Gayle did not even start the match for Punjab.