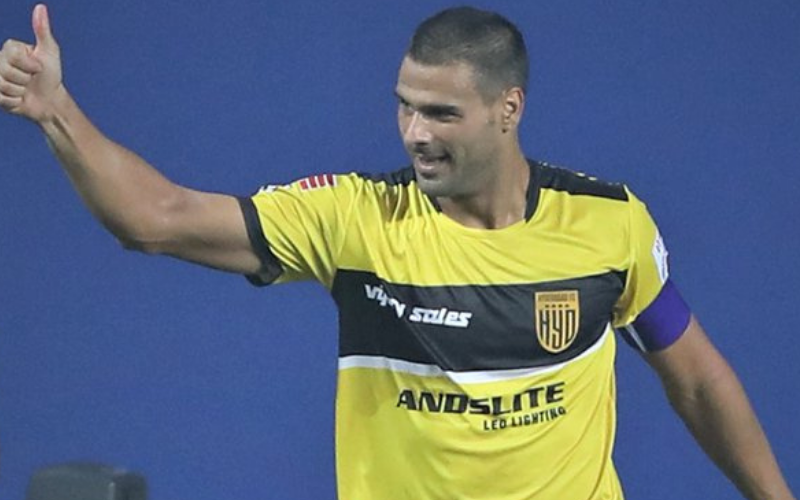 Tilak Maidan witnessed a captivating and eventful affair that saw Robbie Fowler's men impress early as they lead twice but they had no response once the Nizams finally took charge.

Hyderabad FC maintained their unbeaten start to the Hero ISL season 7 with a 3-2 win against SC East Bengal thanks to a quick-fire double from Aridane Santana, condemning SC East Bengal to yet another defeat in the legue at the Tilak Maidan, on Tuesday.

Robbie Fowler's men took the lead with their first goal of the season through Jacques Maghoma (26'). But Aridane swept aside any hopes of a first win with a 56th-minute brace that was separated only by 39 seconds. Halicharan Narzary (68') put the Nizams further ahead. Maghoma scored again (81') but Hyderabad held on for a 3-2 win.

Hyderabad were clearly the better side in the opening quarter and kept their opponents limited to their own half. The Nizams nearly opened the scoring in the 13th minute when an attempted clearance from East Bengal keeper Debjit Majumder hit the onrushing Nikhil Poojary and nearly looped into the net. Mohamed Irshad headed it out for a corner.

The home side created a number of chances but their frontline of Aridane and Poojary couldn’t get the ball in the back of the net.

Then, in the 26th minute, East Bengal scored their first goal of the season with their first shot on target, totally against the run of play. Anthony Pilkington played Matti Steinmann through on the flank, who squared it for Maghoma. Subrata Pal got a hand to Maghoma's shot but it was too powerful for him to keep out.

The Nizams must have thought they restored parity minutes before halftime when they were awarded a penalty for Sehnaj Singh's foul on Mohammed Yasir. But Majumder guessed right and pulled off a stunning save to keep Santana’s penalty out.

Soon after that, SCEB had a chance to double their lead but with only the keeper to beat, CK Vineeth dragged his shot wide.

Hyderabad coach Manuel Marquez threw on Liston Colaco at halftime and he ended up having a significant influence on the game.

In the 56th minute, Aridane scored the first of his goals. Yasir dipped in a perfect free-kick to Santana, who leapt highest to flick the ball into the back of the net. Then 39 seconds later, he was at it again, this time Liston turning provider. The substitute drilled in a low cross at the far post to an unmarked Santana, who put the Nizams ahead.

Then, in the 68th minute, Hyderabad scored again. It was Colaco once again with a fine assist. The Goan lad danced his way past two SCEB defenders and played a low cross at the far post to an unmarked Narzary, who tapped the ball into empty net.

There was still time for Maghoma to score a second for SCEB, but it was too little too late.