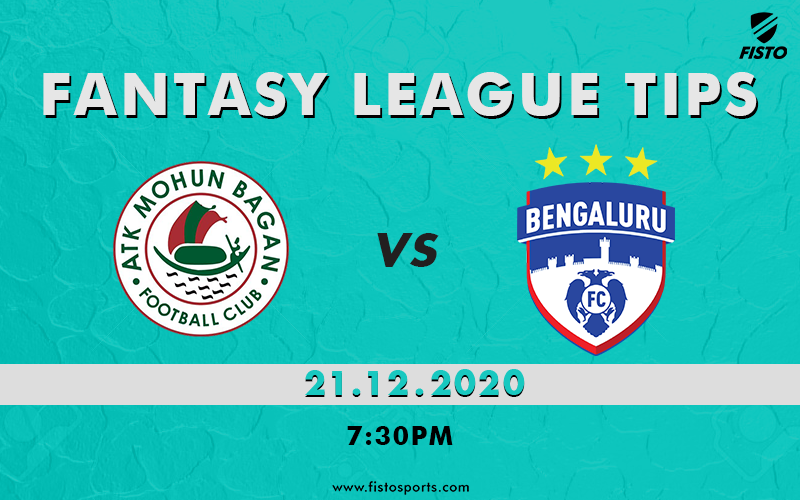 Here's everything you need to whip your team into shape ahead of ATKMB vs BFC of Hero Indian Super League.

Arindam Bhattacharya (ATKMB): ATK Mohun Bagan is a team that plies on counter-attacks and is less likely to take more shots on target compared to Bengaluru FC, who, always tends to shoot on goal. So, we feel Arindam Bhattacharya is a good pick for today's match.

Juanan (BFC): He has two goals to his name already and is always an aerial threat in set-pieces. Considering the fact that Bengaluru FC is good in converting set-pieces, it is important to have someone like Juanan in our team.

Harmanjot Khabra (BFC): He has started to impress a lot after being played at RB in the past few matches. He has delivered 2 assists in the last 2 matches, and both of them have found their captain Sunil Chhetri.

Tiri (ATKMB): He is an experienced centre-back. He is so impressive while defending. He is also a great set-piece threat for ATK Mohun Bagan.

Sandesh Jhingan (ATKMB): Just like Tiri, he is an experienced centre-back and an able leader at the back. Ever so trustable with his defending skills and also scores some good header goals at times.

Dimas Delgado (BFC): If you are selecting a team from Bengaluru FC, then you can't miss out Dimas. He is the core in their midfield, who threads in some amazing through balls with ease. He takes the set-pieces for Bengaluru FC as well.

Cleiton Silva (BFC): He is having an amazing season so far. He already has three goals and an assist to his name and is threatening to score in every match he plays.

Carl McHugh (ATKMB): Another player who is a set-piece target for ATK Mohun Bagan. Apart from his headers, he is very good with defensive tackles and clearness as well.

Erik Paartalu (BFC): There is a reason why we are choosing tall players from both the teams. Both these teams are extremely dangerous through set-pieces and it is safe for us to pick all of their intended targets, so that, if either one of the goal scored is through a set-piece, then we get the maximum points. Carl McHugh and Erik Paartalu has the same attributes.

Roy Krishna (ATKMB): We are seeing him score goals from the last season. Roy Krishna is always in end of a great cross or through balls threaded in by their midfielders or full backs. He is a major threat to any opposition's defense.

Sunil Chhetri (BFC): He was struggling for form in his first 4 matches as the only shot he registered on target was the penalty against Chennaiyin FC. But after he missed the penalty against Kerala Blasters FC, he has scored twice and two amazing headers. He has three goals to his name and will surely score more goals in future matches as well.

Note:  The Fisto's Fantasy 11 is based on predictions and analysis from the previous matches and Fisto Sports won't take any responsibility if the Selected team doesn't perform well. The Team Selection can vary depending upon the Starting 11 of the teams as well.