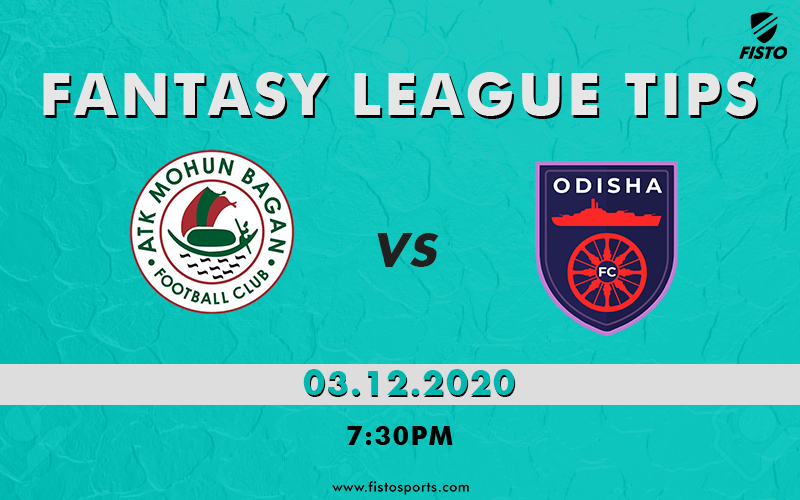 Fisto’s handy Fantasy 11 Hero ISL guide aims to assist your team selections over the course of the 2020-21 campaign.

It is match 15 of the Hero Indian Super League and it is the match between the table-toppers ATK Mohun Bagan and the struggling Odisha FC.

ATK Mohun Bagan has a perfect record in this Hero Indian Super League so far, whereas, Odisha are still searching for their first victory of their Campaign.

Will either one of those records be broken today? Or will the streak continue for both the teams? We will know it by 9:30 P.M. today.

Kamaljit Singh (OFC): ATKMB are so strong in attack, that, they will have a lot of shots on target. Even if they score a goal through such attempts, we expect Kamaljit Singh to make few saves to help his team rescue a point at least.

ATK Mohun Bagan has 2 clean sheets so far, thanks due to the presence of three wonderful centre-backs available in the league, in their side.

Odisha, on the other hand, have conceded 3 goals so far across the two matches.

Tiri (ATKMB): He is a defender with amazing calibre. He is tall and strong and does a lot of clearances as a result. He would be important if ATK Mohun Bagan finish the game with another clean sheet to their name.

Sandesh Jhingan (ATKMB): Another important centre-back for ATK Mohun Bagan side. He is a leader at the back and is quite strong at what he is doing. He is one of the set-piece threats for the Kolkata-based side.

Pritam Kotal (ATKMB): The third centre-back we are having from ATKMB in our team. Unlike the other two, he isn't tall, but he does timely interceptions and tackles. He had the most number of interceptions in the match against SC East Bengal.

Steven Taylor (OFC): He was very good at the back for Odisha in both of their games so far. If not for his blocked shots and interceptions, Odisha would have conceded a lot more goals against Jamshedpur FC. Apart from defending, he also contributes in attack, as it is evident from his "3 key passes" against Jamshedpur FC.

ATK Mohun Bagan is a side who will not tend to have much of a possession to their names. Whereas, on the other hand, Odisha FC maintains a possession-based game. It will be an interesting battle in the midfield between these two sides.

Marcelinho (OFC): Undoubtedly, the star player of Odisha FC. The player with most number of assists in Hero ISL (tied with Boumous). He has been quite in both of his games so far, but he will require just one moment of magic to turn everything around.

Cole Alexander (OFC): Played a crucial role in stopping the Jamshedpur's attacks and quickly helped in some attacking transitions. He will be a much important player for Odisha FC to stop the counter attacks of ATKMB.

Carl McHugh (ATKMB): "He is seen everywhere on the pitch". This was said by one of the on-air commentators. He is an exceptional CDM for ATK Mohun Bagan. Due to his height, he is also the set piece target for them.

ATK Mohun Bagan has one of the relentless attackers in the league. With Roy Krishna, David Williams, Edu Garcia, Manvir Singh, The list just goes on.

Roy Krishna (ATKMB):  He is the key player for ATK Mohun Bagan. Two-goals-in-two-matches and more to come, he is definitely one of the contenders for the Golden Boot this season.

Edu Garcia (ATKMB): Having him in our fantasy side has its own advantage. Firstly, he takes the set pieces for Antonio Habbas's side and secondly, he is the main play maker for them as well. Also, he is not hesitant to take some shots from outside the box as well.

Manuel Onwu (OFC): He had a tremendous turnaround to his ISL career last year after his switch to Odisha from Bengaluru FC. He is tall, fast and is hungry to score more goals match after match. Would possess a big threat to the strong and reliable ATKMB's defense.

Changes That can be made

If Diego Mauricio starts, having him instead of Edu Garcia is recommended. Although it will be a risk of dropping the playmaker of ATK Mohun Bagan, taking an in-form striker instead will be worth taking that risk.