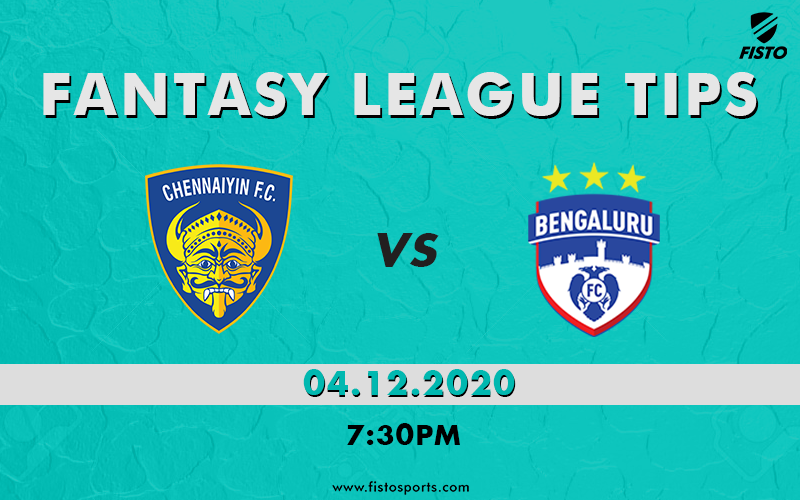 Well there we are. This is a biggie, as Chennaiyin FC and Bengaluru FC take each other on in their head-to-head league, in an epic contest to see who can seize the vital three points and bragging rights. We pop another quid in the fantasy football vending machine, and watch as our crisps inevitably get stuck against the glass, never to be dispensed.

Now let us look at our Fisto's Fantasy 11 Team Tips and Combinations for this Southern derby.

Gurpreet Singh Sandhu (BFC): It is always safe to have Gurpreet between the sticks. He is tall, his reflexes are top notch and makes some important saves in the game, as seen against their first match against FC Goa, where he made a crucial save in the 90th minute to make sure their one point remained intact. With Chennaiyin FC expected to have more shots compared to their counterparts, it is double safe to have GSS In between the sticks.

Both these teams were able to keep a clean sheet in their last match.

Juanan (BFC): He is the defender of Bengaluru FC without any doubts. He also scored in the first match to add to our justification of his selection.

Eli Sabia (CFC): Has been good with his performances so far. He has a very good ability to read the perfectly and defends accordingly. Another set piece target for the László led side.

Both the teams possess a bunch of talented midfielders and it will be very difficult to shortlist them.

Cleiton Silva (BFC): He scored the first goal of BFC's campaign this season. He is a major threat to the opposition defense.

Erik Paartalu (BFC): This tall Aussie is another important midfielder for BFC. He is a box-to-box player. He set up the assist for Juanan's goal in their first match. Just like Juanan, Paartalu is dangerous in set pieces.

Lallinzuala Chhangte (CFC): He is a winger with a great pace and calibre. Everytime he is on the ball; it gets nervy for the opponent defense. Although, he has to work a lot on his shooting and decision making in the final third.

Anirudh Thapa (CFC): He is an amazing talent. One of the best Indian midfielders available in the league as well. It is no surprise that people call him "Wonder Boy". He scored the fastest goal of Chennaiyin FC's history and made a match high 7 interceptions against the Kerala Blasters.

Rafael Crivelero (CFC): He is also known as the "Master". He is the main playmaker for Chennaiyin FC side. He was the second most-assist giver of the last season but he is yet to find his mark this season. But we all know that, once he gets going, then no stopping him back.

Bengaluru FC have struggled in this area of pitch this season, whereas, Chennaiyin F.C has been impressive.

Sunil Chhetri (BFC): The "Captain, leader, legend" of both BFC and Indian national team. He is yet to register a single shot on target this season, but it is not far away is what we sense. But nevertheless, he is surely not a player to be left-off completely.

Isma Gonçalves (CFC): He is considered as "Big Mendoza" by the local fans. He is pacy, physical and athletic. His dribbles are making defenders to break their ankles. Will be an important piece of puzzle for László against Bengaluru FC.