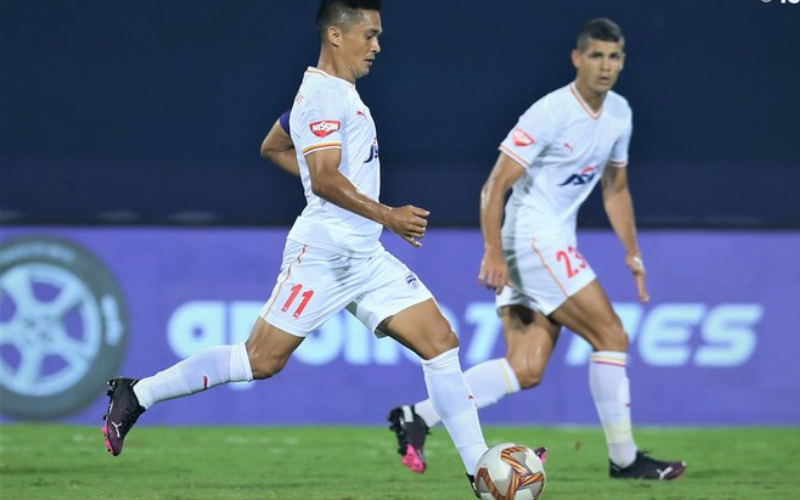 Bengaluru FC got their first win of the season, notching up a 1-0 victory in a heated affair with arch-rivals Chennaiyin FC in the Hero Indian Super League Season 7 at the GMC Stadium, on Friday.

A 56th-minute penalty by Sunil Chhetri was the difference between the two teams as Chennaiyin suffered their first loss of the season.

Chennaiyin made just the one change to the eleven that drew with Kerala Blasters as Jerry Lalrinzuala replaced Chhuantea. Bengaluru coach Carles Cuadrat made three changes — Kristian Opseth, Udanta Singh and Fran Gonzalez were replaced by Deshorn Brown, Dimas Delgado and Rahul Bheke.

The match was off to a physical start with Anirudh Thapa left limping in the fifth minute after a clash of heels with Ashique Kuruniyan. The latter picked up a yellow two minutes later for going in rough on Deepak Tangri. Then came a big blow for Chennaiyin. Thapa had initially continued after his clash with Kuruniyan, but by the 16th minute, he was asking to come off. Chennaiyin coach Csaba Laszlo had to replace him with Edwin Vanspaul.

Bengaluru began to take the upper-hand after Thapa's exit. Around the half-hour mark, Cleiton Silva found Bheke unmarked inside the box, but his header was off target. Seven minutes later, Juanan had a chance to head in from Silva's cross, but only managed to divert it into Chennaiyin keeper Vishal Kaith's hands.

The second period started with a flurry of fouls, freekicks and yellow cards. Rafael Crivellaro, Suresh Wangjam and Reagan Singh went into the book early on while both teams wasted freekicks from good positions. However, in the 54th minute, Chennaiyin committed one foul too much. Vanspaul lunged into Silva inside the box and the referee pointed to the spot. Kaith guessed correctly and dived to his right, but Chhetri's penalty was inch-perfect.

Bengaluru nearly had their second in the 60th minute when a powerful long-ranger from Delgado looked to be going in. Kaith, however, got the slightest of touches to it, diverting the ball from its path.

Laszlo responded to the goal by throwing on Fatkhullo Fatkhulloev and the Tajik nearly scored the equaliser, unleashing a volley off Jerry's cross only for Bengaluru keeper Gurpreet Singh Sandhu to block it. Chennaiyin thought they had a penalty in the 69th minute after Crivellaro's header struck Kuruniyan's hand on the way out. But referee Rahul Kumar Gupta instead pointed to a corner.

Chennaiyin dominated the final period, searching frantically for an equaliser. But they were unable to find a finish to the many chances they created as Bengaluru held on for the win.