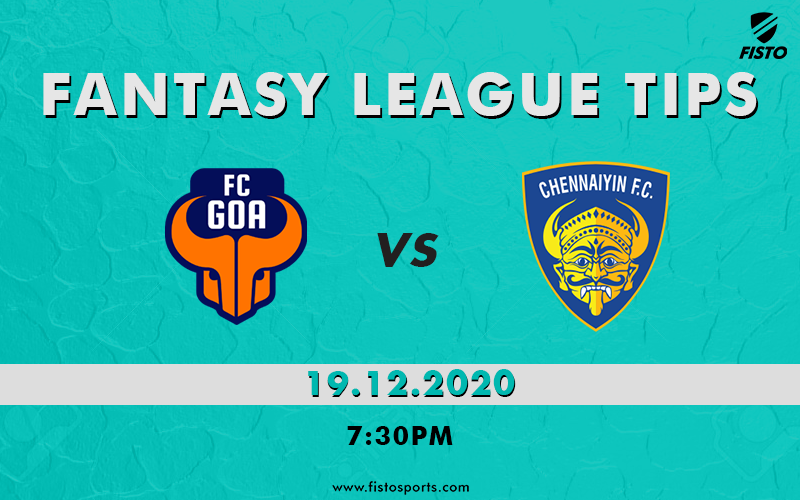 A tasty fixture this one so plan your line-up carefully.

Today FC Goa is taking on Chennaiyin FC at Fatorda, in what will be a rematch of last year's semi-finals which Chennaiyin won on aggregate.

Now, let's look at whom have we selected in our Fisto's Fantasy 11 Team for this match.

Vishal Kaith (CFC): FC Goa is a team that tends to take a lot of shots on target. So, we are expecting Vishal Kaith to be the busiest goalkeeper among the two.

Ivan Garrido (FCG): His performances has not been exceptional, but is decent enough to be part of our Fisto's Fantasy 11. He can earn us points by just passing the ball around.

Gama (FCG): He is the most improved player for FC Goa from the last season. Playing at left back, He has always delivered great crosses into the box and also Does defensive clearances and tackles when needed.

Eli Sabia (CFC): Probably the only defender from Chennaiyin FC side that can be proud of his performances in the last few matches. Had a great game against North East United defensively and also Uses his height to get onto to the end of set pieces as well. He will be a valuable addition to our fantasy 11 without any doubts.

Edu Bedia (FCG): He was rested against Odisha FC, but is most likely to start today. If he does, then he will be a compulsory addition to our team. He forms the core of FC Goa's midfield.

Ortiz Mendoza (FCG): He was rested against ATK Mohun Bagan but will surely start today. He has the great technique to shoot on target. He had a couple of shots on target even after coming in the last 20 minutes against the Champions ATKMB.

Alberto Noguera (FCG): He is performing way more than expected with his creative through balls. His influence in the midfield is important for FC Goa to win any match.

Anirudh Thapa (CFC): Back from an injury, Csaba László said in an interview that Thapa will play 90 minutes against FC Goa. Chennaiyin FC was performing well until the injury to Thapa and that's why he is inevitable to the side from Chennai. He is inevitable to our Fantasy team as well.

Igor Angullo (FCG) : The top-scorer of the league for a reason. He is exceptionally good in finishing. All he need is some Great through balls from the midfield or full backs, and he will pounce on to it.

Jakub Sylvestr (CFC): He is more like a centre forward than a striker. He drops deep to collect balls and interestingly, he helps while defending as well.

Note: In certain applications, the credits of players who have performed well, have increased drastically and it’s difficult to form the perfect Fantasy 11. But we have done our best to give you a team that can earn maximum points.

Also note that The Fisto's Fantasy 11 is based on Predictions and analysis from the previous matches and Fisto Sports won't take any responsibility if the Selected team doesn't perform well. The Team Selection can vary depending upon the Starting 11 of the teams as well.