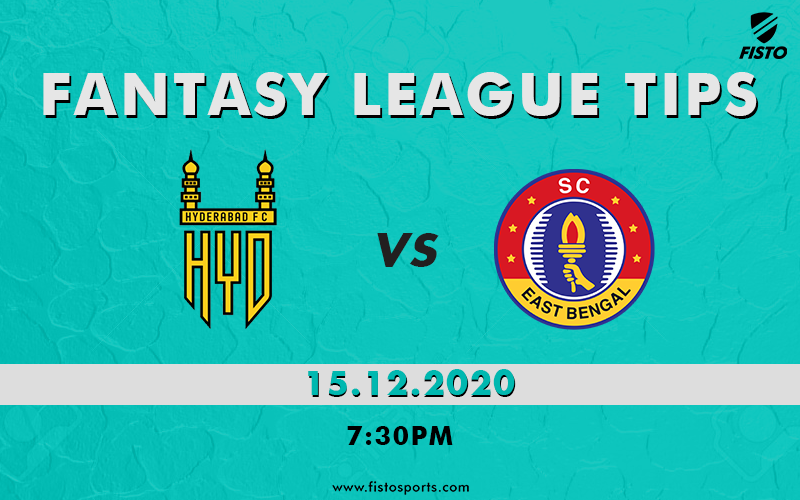 Let’s dig deep to find the players you should pick in Fantasy ISL for this Tuesday’s clash between Hyderabad FC and SC East Bengal.

Those who misjudged your players: Don’t worry, that is where Fisto Sports jumps in to guide you along the journey every day and provide the best possible players to scout.

Hello and welcome to match number 29 of Indian Super League in which Hyderabad FC takes on SC East Bengal in the Tilak Maidan stadium, Vasco.

It is the clash between a team which have never lost a match so far against a team, which has never won a match so far. Will the records change? Or will it remain the same? We will find out tonight.

Now let's take a look at our Fisto's fantasy 11 Team and tips for today's match.

Shankar Roy (EB): It is more likely that Hyderabad FC will take more shots on target, so it is better to have the goal keeper of East Bengal in our side. Sankar Roy or Debjit MA, whoever starts for East Bengal, must be our Goal Keeper.

Odei Onaindia (HFC): He has been a rock at the back for Hyderabad so far. It is fair to say that, he is one of the main reasons of Hyderabad FC keeping 2 clean sheets and just conceded 2 goals so far.

Ashish Rai (HFC): Already recognized as the "Find of the season". From making important Interceptions and tackles to threading in some dangerous crosses into the box, Ashish Rai has done everything perfectly for Hyderabad FC so far.

Nikhil Poojari (HFC): He used to be a winger in his early days, but has been converted as a fullback recently and is doing his work efficiently so far. He is ever so present in the left-hand side of the Hyderabad attack and defense and is a must have in our team.

Holicharan Narzary (HFC): He has been the best player for Hyderabad in the attacking third so far. Although he is yet to score or assist, he has done everything else perfectly. Would not take much long for him to be in the scoresheet.

Anthony Pilkington (EB): One of the few lone bright spots of the East Bengal attack. If a goal has been scored by East Bengal finally, it would be mostly involving Pilkington.

Maghoma (EB): He has been so pacy and creative so far. Unlucky that a couple of penalty shouts haven't gone in his favour so far. He is surely a threat for the opposition defense with his pace and has all the ability to score a goal or assist.

Steinmann (EB): This German midfielder is surely the best player in the pitch for East Bengal in their four matches so far. He helps the team defensively and also starts the attack with his amazing through balls.

Aridane Santana (HFC): He was injured in the match against Jamshedpur FC and wasn't in the squad against ATK Mohun Bagan. If he is in the playing 11 for today, then he is surely the must have striker of our team.

Liston Calco (HFC): The hero of the match in their last game. Was unable to be on the scoresheet, but his technical ability, dribbling skills and pace was phenomenal to watch. We are expecting him to score or assist today.