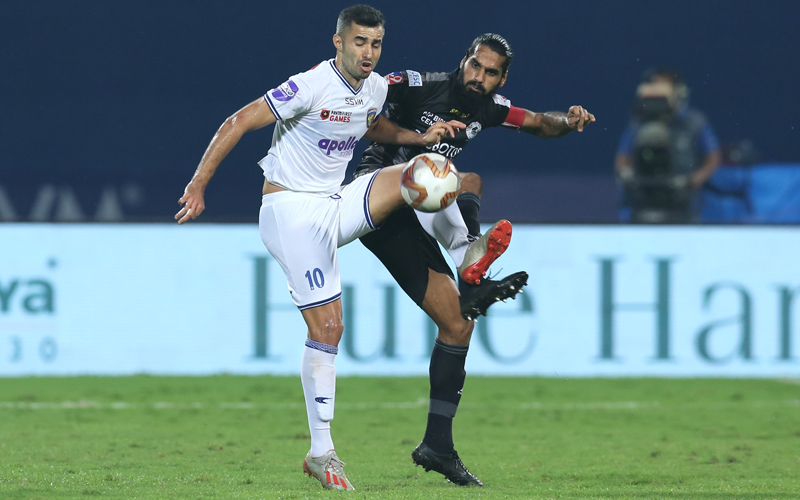 ISL 2020-21: Honours even as lively Chennaiyin fail to convert chances vs ATKMB

There proved to be no hereos for either side as Chennaiyin FC and ATK Mohun Bagan had to settle for a point in this Hero Indian Super League clash.

When two of the most successful teams in Hero ISL history go head to head, it’s always going to be a game full of passion, goals, skill and upset. However, yesterday’s game between Chennaiyin FC and ATK Mohun Bagan was a little different, with just the upset and goals missing.

Chennaiyin, in particular, had multiple chances to put the game to bed, but a brilliant display from ATKMB goalkeeper Arindam Bhattacharja prevented them from finding a goal.

Chennaiyin the better in end-to-end opening

It was Chennaiyin who were on the attack early on, with Arindam called into action as early as in the fifth minute. Chennaiyin captain Rafael Crivellaro, after receiving the ball from Jakub Sylvestr, fired a shot at goal only for Arindam to block it. Minutes later, Lallianzuala Chhangte found himself in a good position but fired wide.

ATKMB grew into the game as it progressed, with their main attacking outlet Roy Krishna often finding himself in the thick of things. In the 19th minute, he supplied Manvir on the right and got into position to receive the ball back, only for the latter to lose it. A minute later, he chased down a deflected ball and nearly scored but was flagged for offside.

Chennaiyin arguably had the best chance of the half just as it was coming to a close. Memo Moura diverted Crivellaro's freekick into the path of Enes Sipovic, who had a wide target to aim at. However, he only managed to shoot straight at Arindam.

Chances at a premium in stifled second half

Soon after the restart, Chennaiyin were denied again by the ATKMB goalkeeper. In the 50th minute, Chhangte got on the end of a long ball from Chennaiyin goalkeeper Vishal Kaith and bore down on goal. His shot looked to be going in but Arindam got a fingertip to it.

Chennaiyin suffered a blow in the 69th minute when the influential Crivellaro went off with an injury. However, that did not stop them from having the better of the game. In the 80th minute, Arindam had to pull off two saves in quick succession to keep his team level. The first, acrobatically diverting Reagan Singh's shot behind, was his best of the match. Then, off the ensuing corner, he was there to prevent Eli Sabia from heading in.

Antonio Lopez Habas' team has a reputation of scoring late goals and they tried to stay true to that, laying repeated sieges to the Chennaiyin box in the final ten minutes. However, a mixture of their own wastefulness and some solid defending from Chennaiyin meant that they ended up drawing a blank.

Chennaiyin had one final chance in injury time, with a free-kick on the edge of the box. However, substitute Fatkhulo Fatkhulloev blazed it over the bar.